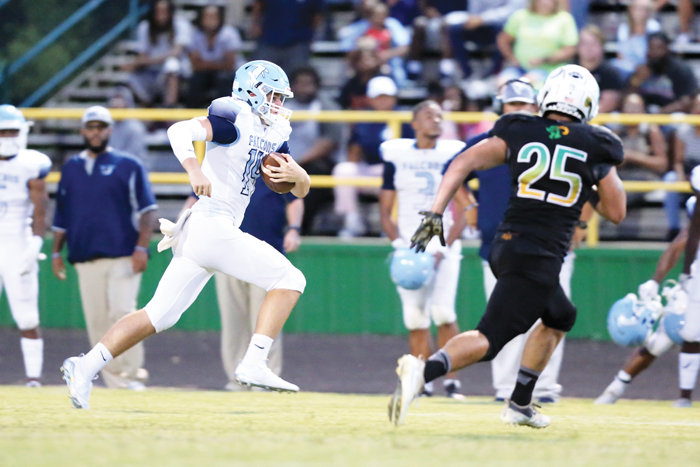 SALISBURY — How the NCHSAA determines the 224 teams that in the football state playoffs and where those teams are seeded actually makes some sense, but there are always anomalies that are interesting to talk about.

Strength of schedule and MaxPreps “adjusted” rankings mean more than actually winning games these days. There are 5-6 teams that aren’t in the playoffs, and 3-8 teams that are in, which is different from the format of a couple of years ago when four wins was kind of the magic number to get in.

Outscored 348-135 and winner of one conference game,  Lake Norman (3-8) is in the 4A playoffs. That’s by virtue of playing in the I-Meck, the state’s toughest league. Mallard Creek, Vance, Hough and Mooresville are all crammed into the I-Meck.

Strength of schedule can also bite you. Salisbury (7-4) is only ranked 225th in the state by MaxPreps because the Hornets played many less than stellar teams in the 2A Central Carolina Conference.

Once the qualifiers (48 in 1A and 4A and 64 in 2A and 3A) for the playoffs are determined, the teams are subdivided into AA or A based on their ADM figures. Frequently 2A, Salisbury, with an ADM of 884, fell into the 2AA bracket this year. The largest school in the 2AA bracket is undefeated and second-seeded Hibriten (1,034), while the smallest is Smoky Mountain (838).

By the way, it’s a little weird to see Pisgah (10-1) seeded ahead of Hibriten (11-0) in the 2AA West bracket. That’s also a change from past years, but that’s strength of schedule at work. Hibriten apparently has hammered a lot of weak teams.

Some years that throws teams that we think of as eastern, teams from the Sandhills, for instance, into the West bracket.

Or teams from the Piedmont can slide into the East bracket. North Davidson, on the outskirts of Winston-Salem, and Ledford, somewhere in the country between Winston-Salem and Thomasville, were placed in the 2AA East this year.

First Flight, which is located on the Outer Banks, will have a five-hour trip (at least) to get to its first-round game at North Davidson, and the Nighthawks are sure to take a pounding once they get there. The playoffs aren’t necessarily fun for everyone.

A team that got hosed badly by longitude is North Stanly. The Comets were banished to the 1AA East.

The 1AA East is a lot stronger than the 1AA West. North Stanly crushed North Rowan, 43-8, at North Rowan in the game that decided the Yadkin Valley Conference championship.

North Rowan (9-2) has had a fine year, is seeded third in the 1AA West bracket and has a first-round bye.

Four teams get a bye in the 1A, 1AA, 4A and 4AA brackets. North Stanly is only a No. 5 seed in the 1AA East, so it will be in action tonight at home against Louisburg.

Whether any of the other local squads can join North Rowan for second-round action next week remains to be seen.

I expect the season to end tonight on the road for West Rowan, East Rowan, Salisbury and A.L. Brown, although I’ll be thrilled to be proven wrong.

Salisbury might have a 25-percent chance of winning at Ashe County. I’d put the chances for the others at less than that.

That’s a lot of offense for an offensively challenged and very young Salisbury team to deal with, but maybe QB Mike McLean can break some long ones and maybe Salisbury, which should have a team speed advantage, can score on defense and/or special teams.

Salisbury blasted Ashe County in a playoff game in 2004. That was coach Joe Pinyan’s first playoff win during his great run at Salisbury.

Memories 1280 will broadcast the action.

Well, this is a rematch no one really wanted to see after the Greyhounds (8-3) throttled the Mustangs, 53-3, a week ago.

In fairness to East (6-5), the Mustangs suddenly lost QB Logan Forbis (appendicitis) last Thursday and didn’t really have time to formulate a game plan for playing without him.

It’s unlikely Forbis will heal by tonight, but East, at least, has had a week to work on trying other things. Maybe we’ll see snaps to Sam Wall in the wildcat formation.

Battle-tested Kings Mountain (9-2) has a small but outstanding quarterback (Kaylon Wade), a great running back (Ricalyn Mack) and a record-setting receiver (Kobe Paysour) and plays football in one of the strongest areas in the state. Kings Mountain has lost only to undefeated Gastonia Huss and Shelby.

West Rowan is dangerous offensively with Jaden Perry running and Payne Stolsworth throwing to Jalen Houston, but the Falcons just haven’t been able to stop the good teams.

West (6-5) just missed on  a great regular season. Make one more play against South Iredell and Statesville, and the Falcons are 8-3, conference champs, and playing at home tonight. But that’s woulda, coulda and shoulda.

This is the first meeting of the schools.

It makes you wince to see A.L. Brown (6-5) as a No. 15 seed, but back-to-back-to-back conference losses will put you in that situation.

A.L. Brown’s dual-threat QB Jordan Medley is a tremendous athlete. He gives the Wonders a chance to put up points against anyone.

But they haven’t stopped anyone lately, and the Rockets (10-1), who are riding a 10-game winning streak, are loaded. QB Alex Flinn is committed to East Carolina and has thrown for 2,674 yards and 30 touchdowns, while running for 500 yards.

Jhari Patterson has 57 catches for 1,059 yards. Patterson and Carter Lindsay have combined for 16 TD catches.

A.C. Reynolds has picked off 17 passes, seven by Warren Stoterbury.