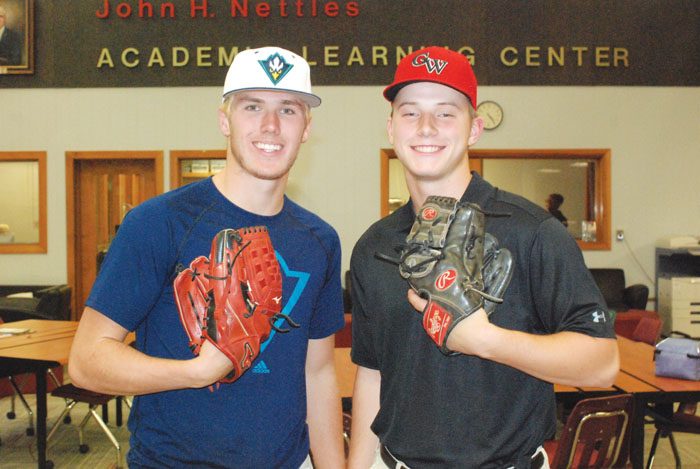 Dennis Davidson/Salisbury Post ... A signing ceremony was held at Salisbury High School on Wednesday, for Jack Fisher, left, and Bo Rusher, right. Both student athletes signed with Division I baseball programs, as Fisher is heading to UNC Wilmington while Rusher is going to Gardner-Webb.

SALISBURY — Salisbury seniors Jack Fisher and Bo Rusher didn’t sign Division I baseball scholarships on Wednesday because of stats or even because of potential.

They were able to sign because they checked all the off-the-field boxes.

“College coaches always ask me about grades and character first, and character and grades are no-brainers with these two,” Salisbury head coach Mike Herndon said. “They’ve been raised well and they try to do everything the right way. They do church work. They volunteer in the community. They’re talented, but they also have that special work ethic that makes D-I players. Every practice, they’re the first to arrive and the last to leave.”

Fisher, a 6-foot-2, 190-pound lefty pitcher, has sky-is-the-limit potential. One of the county’s best athletes, he’s been the Rowan County Player of the Year for soccer and he kicks and punts for the football team. He’s sprinted from one practice to the next one for years. He even plans to make a basketball comeback as a senior after taking last year off.

He signed with UNC Wilmington.

Rusher, a 6-1, 190-pounder, is a capable catcher who swings a line-drive bat from the left side. He signed with Gardner-Webb.

Fisher and Rusher have played against or with each other a long time.

“We were travel ball teammates when we were 13,” Rusher said. “I’ve kind of always been Jack’s catcher.”

They faced each other as showcase ball adversaries recently. Fisher pitched for the Canes, while Rusher swung for the South Charlotte Panthers.

“I grounded out twice against Jack,” Rusher said. “The second at-bat, I hit a really hard ground ball up the middle. Jack made a great play on it. He robbed me.”

Rusher, who gave up a promising career as a football quarterback to focus on baseball, has been a standout almost since he walked on the field for the Hornets as a freshman in the spring of 2016.

He’s been all-county the past two seasons.

His batting averages have progressed from .292 to .362 to .430. His power started to kick in as a junior. He plays in a tough home park for power hitters, but he whacked three homers and drove in 31 runs last season. He’s patient enough and runs well enough to lead off, but he’s also clutch enough to hit in the No. 3 or No. 4 spots in the batting order.

“He’s a really good player who can do a lot of things,” Herndon said. “Defensively, he’s not limited to catching. He has really good hands and could play first base or third base at the next level. He’s also a good outfielder and a very good pitcher.”

Rusher was pursued by a lot of Division II schools. Tusculum and Lenoir-Rhyne really wanted him, while Catawba made a late push.

But Gardner-Webb had the inside track. Ross Steedley, the former East Rowan and Charlotte 49ers star, is an assistant at Gardner-Webb. He works with the hitters and catchers, and he’s also the recruiting coordinator. Steedley connected with Rusher.

“I visited Gardner-Webb a couple of weeks ago and had a chance to see the weight room and the academic buildings as well as the baseball facility,” Rusher said. “They made an offer, and I asked them if I could have a few days to think about it. Then my mom went to see the school and she agreed that it was the best place for me.”

Rusher gravitated to the catching position as early as his Coach-Pitch days. He’s naturally right-handed, but when he first picked up a bat at age 2, he swung lefty. He’s experimented with switch-hitting, but he swings lefty all the time now.

Rusher should get a shot at catching for Gardner-Webb as early as his freshman year. The top catchers on the roster are veterans.

For Fisher, the path to success has encountered more detours. He shredded shoulder muscles as a freshman. That set back his development.

Herndon brought him along slowly his sophomore season, was always careful with him. Fisher threw 20 innings in 13 appearances.

“I never doubted Jack was going to be really good,” Herndon said. “The reason for that is his competitiveness. You put him in a competitive situation where it’s sink or swim, and he’s going to swim every time.”

Fisher’s ERA during his limited sophomore season was 1.42, which hinted at what he might do if he ever got fully healthy.

“Before my junior season, I remember Coach Herndon asked me, ‘Are you ready?’ Fisher said. “I was. It really felt like it was my first high school season.”

He was outstanding as an all-county junior, posting a 7-3 record. He was runner-up for Central Carolina Conference Pitcher of the Year. His season included victories over powerhouses North Davidson and Ledford. Fisher beat Ledford, 4-1, when the Panthers were ranked No. 1 in 2A, with Rusher relieving him for the save.

“We had a good season (17-11),” Rusher said. “Jack beating Ledford probably will always be my best memory.”

Fisher comes from a soccer family. He has two older brothers who were goalkeepers and went on to D-I programs. He really enjoys soccer and he’s great at it, but he’s looked at baseball as his most likely college sport for several years.

UNC head coach Mike Fox convinced him that baseball was going to be important for him.

“Eighth grade had just ended and I’d played academy soccer,” Fisher said. “But then I went to baseball camp at UNC and Coach Fox watched me pitch and my mom asked him if I might have a future.”

“I think he does,” Fox answered.

Those four words stuck with Fisher. They got him through tough times when he was struggling to get healthy.

Fisher is such a special athlete that he hit close to .300 with 19 RBIs for the Hornets last season, while playing brilliantly in center field when he wasn’t on the mound. He drew a lot of attention. He also was offered by East Carolina, Charlotte and High Point, among others.

“I had some good offers, but UNC Wilmington was the first school that recruited me, and I always liked them,” Fisher said. “They have a great program. I hope I can help them make some runs.”

Herndon expects the Hornets to have a big season this spring. He’ll build his pitching staff around Fisher and his lineup around Rusher.

“They’re two amazing kids,” said Herndon who arrived at Salisbury when Rusher and Fisher were freshmen. “I’m excited for their senior season, but it also makes me sad that this is the last one.”

Fisher showed just how special he is when he addressed the large crowd that gathered in the media center to watch the two Hornets sign.

“This day is not about me,” he said. “This day is about you. Everyone in this room helped get me here.”