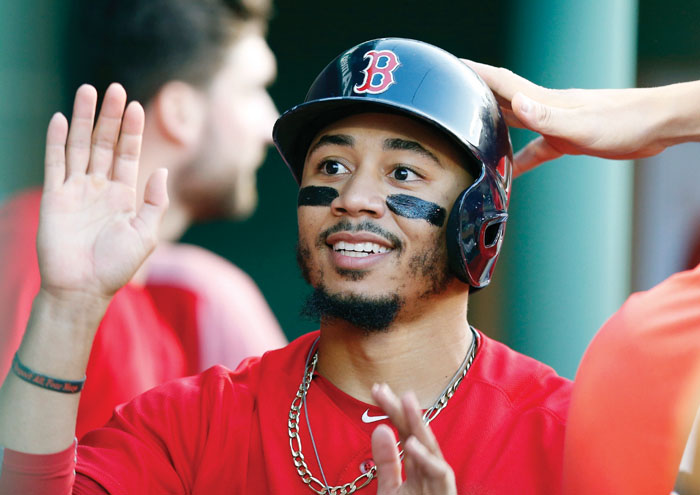 FILE - In this Friday, July 13, 2018 file photo,Boston Red Sox's Mookie Betts celebrates after scoring on a single by Brock Holt during the second inning of a baseball game against the Toronto Blue Jays in Boston. Boston’s Mookie Betts and Milwaukee’s Christian Yelich were runaway winners of the Most Valuable Player awards after the 26-year-old outfielders each led their teams to first-place finishes with dominant seasons that included batting titles. (AP Photo/Michael Dwyer, File)

By RONALD BLUM, AP Baseball Writer
NEW YORK (AP) — Mookie Betts is ready to become an ambassador for baseball, now that he’s won a batting title, World Series and Most Valuable Player award with Boston.
“I enjoy being kind of a face around the game. I’ve kind of used this pedestal or whatever you want to say to spread knowledge that the game is fun,” he said Thursday after his runaway victory for the AL MVP award.
Milwaukee’s Christian Yelich was close to a unanimous pick for the NL honor. A 26-year-old outfielder just like Betts, Yelich also won a batting championship and led his team to a division title. But while Betts has been with the Red Sox since he signed after the 2011 amateur draft, Yelich didn’t join the Brewers until he was dealt to Milwaukee last January by the payroll-paring Miami Marlins.
“I’m thankful it all worked out because being traded, you never know how it’s going to be,” Yelich said. “Luckily for myself, it all went amazing.”
Yelich is signed through 2021 and his deal includes a team option for the following season. Betts didn’t want to speculate whether he would be a Red Sox lifer, like former Boston MVPs Ted Williams, Carl Yastrzemski and Jim Rice. Betts can become a free agent after the 2020 season.
“Right now I’m just focusing on the 2019 season coming up,” he said.
Betts received 28 first-place votes and 410 points from the Baseball Writers’ Association of America.
Los Angeles Angels outfielder Mike Trout, a two-time MVP, followed with one first-place vote and 265 points. Trout tied the record of four second-place finishes shared by Stan Musial, Williams and Albert Pujols. Trout won in 2014 and 2016, finished second in ’12, ’13 and ’15, and was fourth in 2017.
Cleveland third baseman Jose Ramirez was third with 208 points, and Red Sox designated hitter J.D. Martinez was next with one first and 198 points.
Betts hit a major league-leading .346 with 32 homers, 80 RBIs, 42 doubles and 30 stolen bases as the leadoff hitter for the Red Sox, who won a team-record 108 games and their fourth World Series title in 15 seasons. Votes were submitted before the postseason.
Betts, second to Trout in the 2016 vote, raised his profile when he fed homeless people on the steps of Boston’s Public Library after the second game of the World Series. Unlike some baseball players, he doesn’t eschew off-the-field limelight. Commissioner Rob Manfred criticized Trout during the All-Star Game for not making enough of a marketing effort.
“I definitely think it’s pretty cool in some settings,” he said, “and in some setting settings I just kind of want to be with my family.”
Both batting champions won MVP awards for the first time since San Francisco’s Buster Posey and Detroit’s Miguel Cabrera in 2012.
Yelich got 29 first-place votes and 415 points, and the other first-place vote went to New York Mets pitcher Jacob deGrom, the NL Cy Young Award winner, who finished fifth. Chicago Cubs infielder Javier Baez was second with 250 points, followed by Colorado third baseman Nolan Arenado with 203.
Yelich won the first batting title in Brewers history with a .326 average. He set career highs with 36 homers and 110 RBIs and had a 1.000 OPS.
Yelich nearly became the NL’s first Triple Crown winner since Joe Medwick in 1937, finishing two homers shy of Arenado and one RBI back of Baez. Yelich was especially impressive in the second half, hitting .367 with 25 homers and 67 RBIs — including 11 homers in August and 10 in September.
Milwaukee reached the playoffs for the first time in seven years, swept Colorado in the Division Series then lost to the Los Angeles Dodgers in a seven-game League Championship Series, falling one win short of its first World Series appearance since 2002.
Yelich gets a $100,000 bonus for winning, and the price of the 2022 team option in his contract increased by $1 million to $16 million.
Yelich celebrated in Southern California with family and friends, including Heisman Trophy winner and Browns quarterback Baker Mayfield. Yelich is from Westlake Village, California, near the site of a recent mass shooting and the Southern California wildfires. He wore a Los Angeles Fire Department cap during TV interviews.
“Almost everyone had to be evacuated, just from the Thousand Oaks, Westlake, Malibu area,” he said. “We were fortunate enough to make it with no damage, A lot of people, unfortunately, were not able to say the same.”
___
More AP MLB: https://apnews.com/MLBbaseball and https://twitter.com/AP_Sports