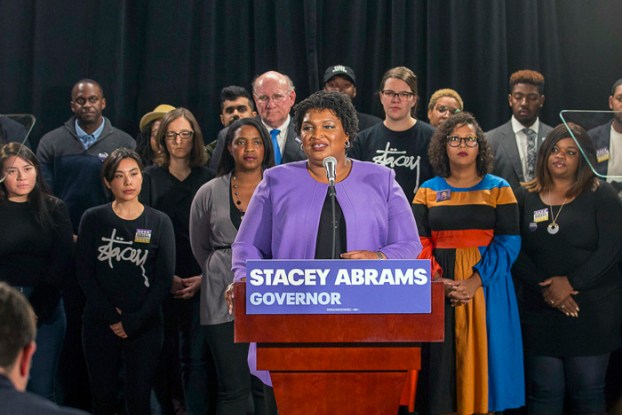 By Bill Barrow and Kate Brumback

ATLANTA — Democrat Stacey Abrams ended her challenge to Republican Brian Kemp in the Georgia governor’s race on Friday but pledged to fight the former secretary of state’s “gross mismanagement” of the elections with a federal lawsuit.

Speaking defiantly to a news conference, Abrams said her actions did not constitute a concession, but she acknowledged that she had no further recourse under the law and that Kemp would be certified the winner.

“Let’s be clear: This is not a speech of concession,” she said. “Because concession means to acknowledge an action is right, true or proper. As a woman of conscience and faith I cannot concede that.”

In accepting Abrams’ decision to end her campaign, Kemp said he appreciated “her passion, hard work, and commitment to public service.”

“The election is over and hardworking Georgians are ready to move forward,” he said. “We can no longer dwell on the divisive politics of the past but must focus on Georgia’s bright and promising future.”

Kemp, a 55-year-old businessman, had been secretary of state since 2010. He was backed by and had embraced President Donald Trump as he tried to maintain GOP dominance in a state that hasn’t elected a Democrat to the governor’s mansion since 1998.

He was heavily criticized for refusing to step down from his post overseeing elections in which he was a candidate. Abrams’ campaign accused him of trying to suppress the votes of minorities by purging voter rolls and implementing a state law requiring that the names of voters on their registration forms exactly match those on their government identification. Kemp said he was trying to maintain the integrity of Georgia’s voter rolls.

Officials from Abrams’ campaign had told The Associated Press on Thursday that the candidate was considering the unprecedented move of invoking a state law that would let her challenge the results based on “misconduct, fraud or irregularities … sufficient to change or place in doubt the results.”

But ultimately she declined to do so.

Instead, Abrams said she would fight to restore integrity to Georgia’s election system in a new initiative called “Fair Fight Georgia.”

“In the coming days, we will be filing a major federal lawsuit against the state of Georgia for the gross mismanagement of this election and to protect future elections,” Abrams said. She did not give details.

Abrams also said she would support John Barrow, the Democrat vying to succeed Kemp as secretary of state in a runoff next month.

Kemp stormed to the GOP nomination with ads featuring everything from the candidate cranking a chain saw and jokingly pointing a gun toward a teen male suitor of his daughter, to Kemp’s offer to “round up criminal illegals” himself in his pickup truck. He’s promised a tax cut and teacher pay raises and pledged to continue Georgia’s refusal to expand Medicaid insurance under President Barack Obama’s 2010 health care overhaul.

Abrams’ campaign sparked huge energy across the state and she became a national Democratic star. Election turnout among both sides’ energized bases nearly equaled that of the 2016 presidential vote.

Aides close to Abrams said that since the election she had been wrestling with competing priorities: She wanted to advance her assertions that Georgia’s elections process makes it too hard for some citizens to vote. But she also recognized that a protracted legal fight would harm that cause and potentially her political future.

Kemp’s victory is an important marker for Republicans ahead of the 2020 presidential election.

Kemp’s narrow margin already suggests that Georgia, a state Trump won by 5 percentage points in 2016, could be a genuine battleground in 2020. Trump bet big on Kemp, endorsing him ahead of Kemp’s Republican primary runoff and campaigning for him the weekend prior to the Nov. 6 election. Now, Trump will be able to return with an incumbent governor as he seeks a second term.

Abrams’ political future is less certain. She made believers of old-guard Democrats in Georgia who didn’t think a black woman could compete in a general election, and she emerged as the party’s clear leader. But the party also has plenty of other ambitious politicians who will want to take advantage of the path that Abrams’ has laid out. The next big shot for Democrats is a 2020 Senate race, with Republican Sen. David Perdue making his first re-election attempt.