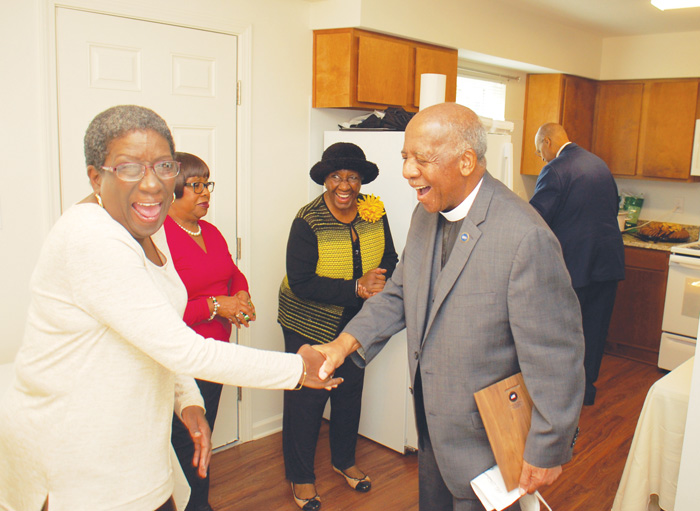 The Rev. Dr. Vernon Shannon, one of the founding pastors behind the building of Zion Hill Apartments in 1968, shares a good laugh Wednesday with Linda McCombs. Behind them are Shirley Holt and Dr. Yvonne Tracey. They're standing in one of the 50 renovated apartments at Zion Hill. Mark Wineka/Salisbury Post

“We should not be so heavenly based that we’re not earthly good,” Shannon said.

Shannon’s comments related to a unique partnership in Salisbury — one that built the 50 units of Zion Hill Apartments in 1968 and just recently completed $4.6 million in renovations to the complex.

And today, a 10-member board of directors — five people from each church — still oversees Zion Hill Apartments,  whose units extend back from the corner of Standish Street and Brenner Avenue.

As pastor at Moore’s Chapel in 1968, Shannon joined the Rev. Herman L. Anderson of Soldiers Memorial as founding pastors for the apartments.

Shannon and his wife, Mildred, drove from Silver Springs, Maryland, on Wednesday to take part in a rededication of Zion Hill, “because I have tracks around this place,” Shannon said.

“I don’t know what would have prevented me from coming,” he added. “… Precious memories flood my mind.”

Because of the cold, rainy weather, Wednesday’s rededication took place in one of the renovated apartments, a four-bedroom unit near the playground.

Those attending included current Zion Hill board members and relatives of the original board members. Time was taken to honor Shannon and the late Anderson, who eventually became a bishop in the AME Zion Church.

It’s not enough for Soldiers Memorial and Moore’s Chapel to help people reach heaven, Shannon said. They also cannot ignore the health, educational and social needs of people on earth.

Shannon said the churches took a holistic approach 50 years ago and should continue that today.

“You must not underestimate the value of what you’ve done here,” Shannon said. “Great things can happen when institutions cooperate.”

And cooperate with God, he added.

Zion Hill Apartments Inc. retired its original financial obligation for the complex on March 5, 2012. In 2016, the board of directors approved the rehabilitation of the property and submitted an application to the U.S. Department of Housing and Urban Development for its OK.

The renovations began in 2017 and were completed in August.

Herbert Chambers, chairman of the Zion Hill board, said the total cost was about $4.6 million. The renovations were done section by section. Alternative places for families were found when it came time to rehabilitate their apartments.

“We didn’t have to put anybody out,” Chambers said.

At present, 47 of the 50 units are occupied, according to Chambers.

Architect for the project was Clinton Gravely of Greensboro. Multi-Family Select Management Inc. of Greensboro manages the property for the Zion Hill board.

Scott Neely of Multi-Family Select said every member from both churches “were just wonderful to work with” during the renovations, and he gave special credit to Chambers.

“This man was there every single time,” Neely said.

Neely said the availability of affordable housing in the country is decreasing as housing authorities reduce their number of units.

“Can you imagine taking these 50 units away from Salisbury?” Neely asked. “What you have done here is buck the trend.”

“We are very proud of the apartments, and they have made their mark on Salisbury,” Holt said.

The complex has been in place 50 years, but many people still don’t know about the church partnership behind them, Holt said.

Tracey referred to the complex as “the City of Hope.” As for the future of Zion Hill, she said, “Let us journey on.”

The Rev. Dr. Grant Harrison Jr., presiding elder for the AME Zion’s Salisbury District, also was on hand, called it “a joyous occasion.” He encouraged members of both churches to tell their story of partnership.

The city of Salisbury issued a proclamation for the rededication. During his remarks, Shannon commended the city for its help at the time the apartments were built.

The land for Zion Hill Apartments was bought from Livingstone College.