Panthers’ defense aims to put ‘humbling’ loss behind them 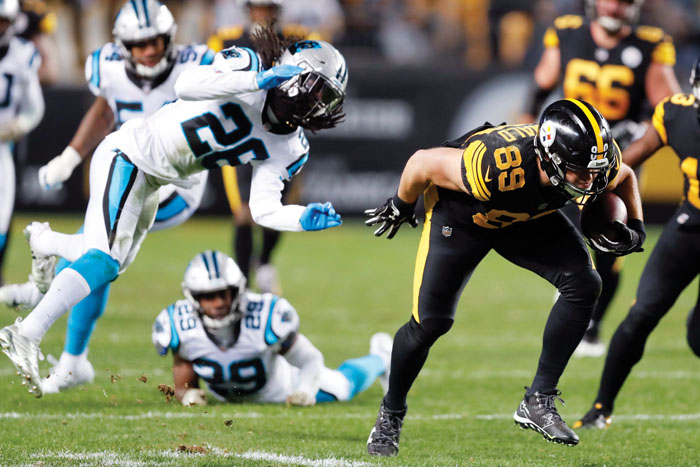 FILE - In this Nov. 8, 2018, file photo, Pittsburgh Steelers tight end Vance McDonald (89) runs with the ball during the team's NFL football game against the Carolina Panthers in Pittsburgh. Among the Panthers defenders are Mike Adams (29) and Shaq Thompson (54). The Panthers have been a perennial top 10 defense since middle linebacker Luke Kuechly’s arrival in 2012, making their performance against Pittsburgh all that much more surprising. The Steelers scored on seven of their first eight possessions; the only time they failed to do so was when they took a knee before halftime to run out the clock. (AP Photo/Keith Srakocic, File)

CHARLOTTE (AP) — Thomas Davis said Carolina’s most recent loss could turn out to be a positive for the Panthers moving forward.

The 13-year NFL veteran explained Wednesday that the embarrassing performance might have been just what Carolina (6-3) needed to regain its focus on defense, for players to get on the same page and make a playoff run beginning this Sunday when the Panthers visit the Lions.

“If you are true competitor, you want to bounce back and you want to do something about it,” Davis said. “I’m a competitor and I want to get that taste out of my mouth.”

The Panthers have been a perennial top 10 defense since middle linebacker Luke Kuechly’s arrival in 2012, making their performance against Pittsburgh all that much more surprising. The Steelers scored on seven of their first eight possessions; the only time they failed to do so was when they took a knee before halftime to run out the clock.

“It’s not something that happens a lot around here,” Kuechly said of surrendering 52 points.

Things have gone so well for Carolina on defense in recent years that the last two coordinators left to take head coaching jobs — Sean McDermott in Buffalo and Steve Wilks in Arizona.

The Panthers are 15th in the league overall and 31st in red zone defense.

Washington said a “myriad of things” went wrong against the Steelers.

“We had execution issues,” said Washington, the team’s defensive line coach from 2011-2017. “… We have calls, we have leverage, we have gap responsibility. We have things that we have to do from one down to the next in terms of our assignment. And we did not get that done.”

Washington’s body of work as a defensive line coach was impressive.

Since 2012, the Panthers have more gotten more sacks from their defensive linemen (234) than any team in the league. So for the Panthers to have only 22 sacks this season is disappointing to him.

“We’re his pride and joy,” defensive tackle Kawann Short said. “That’s one of those things where he demands more out of us, and he knows what every guy in that room is capable of.”

The Panthers didn’t watch game film from Steelers loss as a team, instead electing to move on to preparations for Detroit. But Short said it feels like players are trying to do too much on their own instead of playing as a team.

“We just need to light our hair on fire, and just go,” Short said.

Washington called the Steelers game an “anomaly,” guaranteeing the Panthers will rectify their problems.

When players returned from a long weekend off he reminded them of this team’s long-standing identity as a defensive power, as well as the amount of talent in the locker room. Along with defensive end Julius Peppers, Kuechly has a chance to be a Hall of Famer.

“We have a high opinion of what we should be able to do every time we step on the football field,” Washington said.

“One game doesn’t define a season,” Kuechly said. “And I don’t think you can waste time thinking about something in the past when you play a good team this week.”