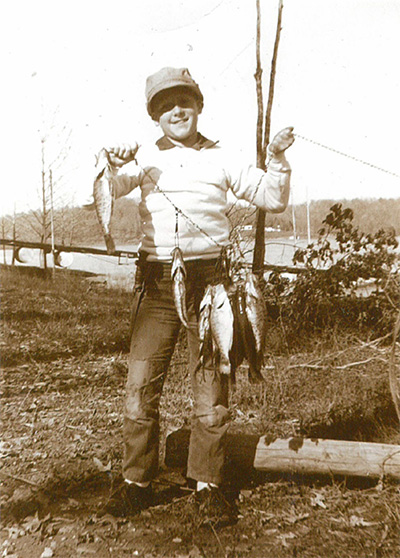 One of my most prized possessions is a watercolor painted behind my back some years ago by an artist friend at the behest of my wife from an old black and white photo and presented to me on my birthday. In it, I stand on the bank of Lick Creek in Decatur County proudly displaying a big stringer of bass and crappie caught on a perfect October day with my granddaddy.

I can still taste the hoop cheese and 6 oz. Cokes he had stocked for the expedition. I am wearing a Jones cap, a white sweatshirt, jeans with patched knees (didn’t everyone then?) and black Keds. From my belt hangs a sheath knife, one of the most important benefits of membership in the Boy Scouts. (Of course, you don’t need such a blade to fish for crappie and bass in a boat, but what 11-year-old boy cares?)

In the background far across the lake, you can see some of the simple, boxy sheet-metal boathouses floating on oil drums that most weekenders had back then.

The cabin was my favorite place in the world when I was a boy. I heard many times the story of how my grandparents, initially partnering with another couple, had bought a houseboat after the owner had drowned — swamped in his little fishing boat by a huge barge out on the Tennessee River — and then picked out a little lot and had it hauled up into the woods to become their beloved retreat. Another interesting detail is that, apparently, the driver only succeeded in jockeying the houseboat between all those oaks and hickories because he was nearly blind drunk.

The cabin was painted (imagine — oil-based) milk chocolate brown with yellow trim and had a flat roof that Granddaddy would replace periodically with rolled roofing. There was only one entrance because the other end had been screened in. What a glorious place to sleep with the tree frogs and whippoorwills competing lustily all night in the dead of summer!

I learned to shoot with his old single-shot Remington .22 over the rail of the front porch at a Vienna sausage can hung from a string back in the woods. No squirrel or crow was safe in the surrounding forest.

My family lived in Memphis, but I lived to go to that cabin with my grandparents to fish and hunt on weekends and for weeks in the summer. Looking back half a century now, it seems incredible that no one seemed interested at all when I boarded the Greyhound bus on Summer Avenue with my cased H&R Topper for the ride over to Jackson. (And what would happen today to a Memphis kid with a shotgun across the handlebars of his bike headed out Quince to Nonconnah Creek to shoot pigeons?)

It is hard to describe just how my heart always leapt each time we left the blacktop to take the graveled lakeside “Jungle Road” (as we kids called it because of the canopy of trees overhead) and finally spied our dear cabin around that last bend.

Since I was a relatively — no, I take it back — absolutely broke new college graduate when I got married, my new bride and I even spent our honeymoon there, starting a lifetime of outdoor adventure together. Didn’t you give your spouse an ultralight spinning rig as a wedding present?

My further schooling and career took me away from the river for good, and after my grandparents died, the cabin was ultimately lost after being mortgaged to fund a failed business venture. The man who won it at the foreclosure auction only wanted to raze it to enjoy a more expansive view. I am told that the area now features a much fancier class of waterfront home, and I choose to just believe it and nod. I can’t go back there; my memory of that old brown houseboat stranded in the hardwoods is the one I want to keep.

Other Voices: Another attack on gerrymandering