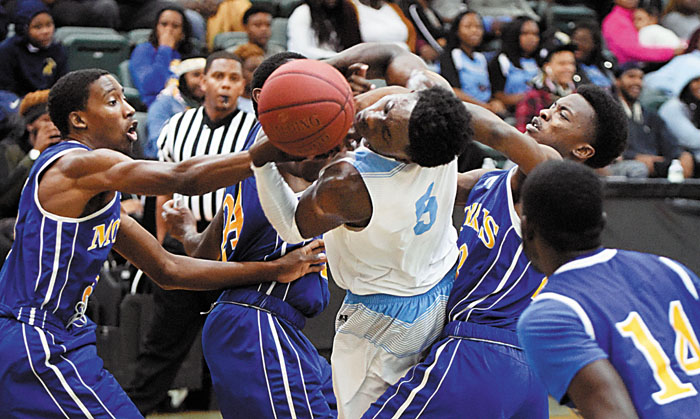 Wayne Hinshaw/for the Salisbury Post ... Livingstone’s Lydell Elmore (5) gets banged around while rebounding, during last night’s game against Morris. Elmore led the Blue Bears with 21 points.

“He’s very underrated,” Stinson said, after the Blue Bears won their second straight and improved to 2-1. “A lot of people overlook him. Everyone likes to talk about his hands. He’s gotten stronger and is a big part of what we do.”

Elmore — who forms part of LC’s towering, front-court skyline along with twin brother Navar Elmore and 6-10 Division I transfer Kenny Grant — was impossible-to-ignore against Morris (2-2). He shot 7-for-12 from the field, scored 21 points and blocked four shots. Included were a pair of clutch free throws that gave Livingstone a three-point lead with 1:27 remaining.

Even on a night when Livingstone wasn’t at its best. The Blue Bears trailed at halftime and didn’t take the lead for good until junior guard Roger Ray converted two free throws to snap a 77-77 tie with 3:39 to go.

“As a leader, I tried to stay poised,” said Ray, who contributed 12 points and nine assists despite shooting poorly and turning the ball over five times. “I tried to stay calm, no matter how many plays we messed up, and they followed me. As long as we win at the end of the day, it doesn’t matter.”

Ray sank all seven of his free throws and scored seven points in the last five minutes.

“Livingstone ran their plays and played well as a team,” Morris coach Clarence Houck observed. “They have team chemistry. That’s what wins games.”

This one took some doing. For every charge the Blue Bears made, Morris had an equal response. When they edged ahead, 27-23, on Malik Smith’s fast-break jam in the first half, Morris pushed back with an 11-4 spurt and a 34-31 lead. In the second half, Lydell Elmore and Ray teamed up on a fan-pleasing, alley-oop slam that provided a 58-53 LC lead — only to watch it evaporate when Morris’ Eric Jones completed a three-point play with 5:27 remaining.

“We’d like to be able to put people away, but this was a pretty good NAIA team,” said Stinson. “They just beat Fayetteville State. I mean, we went up by six and then Roger came down and tried to go in between two defenders. They took it away and went down the other end and scored.”

There was more frustration in the closing minutes. With Livingstone clinging to a three-point lead, Smith (12 points, 9 rebounds) assertively rebounded his own missed shot. But instead of pulling the ball out and taking valuable seconds off the clock, he immediately misfired on a layup from the right side.

“He could have melted it down and gotten fouled,” Stinson noted. “But he tried to go for the basket.”

Livingstone’s final basket came when Ray drove the right side for a layup, got fouled by senior Demetrius Holiday and hit a free throw, giving the hosts a 76-75 advantage with 4:42 to go. The Blue Bears secured the victory by draining 10 of 13 free throws down the stretch.

“We had some close games in West Virginia,” said Grant, who contributed a double-double (13 points, 10 rebounds) in his first game at Trent Gym. “I think this shows we’re disciplined as a team. The five guys on the court know how to work together.”

On this night, no one worked better than Lydell Elmore. At 200 pounds, he played like a low-post banger with a sweet shooting touch — delivering a game-opening 3-pointer, several well-conceived jump shots from the wings and  a pair of thunderous dunks.

“We stayed in Salisbury and worked on that (alley-oop) play the whole summer,” Ray said. “I’d throw it up to the net and he’d go get it. It’s just starting to pay off.”

NOTES: LC shot 43.1 percent from the field (28-for-65) and had a 48-37 rebounding edge. … The Elmore twins combined to block seven shots, all in the first half. … Holiday paced Morris with 21 points, though just three came after the intermission. Teammate Alex Moss (12 points, 10 rebounds) had a double-double. … Livingstone competes in the J.C. Smith Tipoff Classic this weekend in Charlotte. It faced Lenoir-Rhyne on Friday and Bluefield State on Saturday.