Leonard Pitts: ‘Enough’ was a long time ago 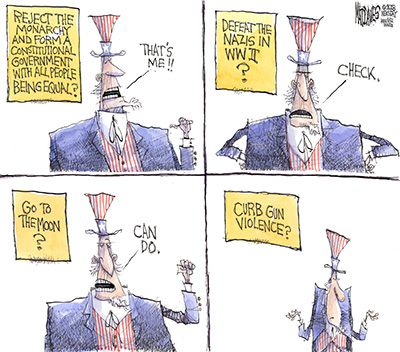 Maybe this is futile. After all, there’s little point in talking back to a deranged person, especially if he is dead.

Both descriptions fit the man who took his own life after opening fire in a bar in Thousand Oaks, California, last week, killing 12 people, among them Ventura County Sheriff’s Sgt. Ron Helus, the “good guy with a gun” who the NRA has always assured us would be our protection from random slaughter.

Now the hunt for a motive is underway, an all-too-familiar routine that never seems to make madness make sense. Yet we keep trying. Over the years, we’ve pinned these shootings on everything from bullying to Batman to video games to mental illness to the inability to get a date.

As it happens, this shooter, in a post left on a social-media platform in the middle of his killing spree, has already given us the reason he did it. “Fact is, I had no reason to do it,” he wrote, “and I just thought, f— it, life is boring, so why not?”

And for all the pontifical certainty of TV talking heads and newspaper pundits, that’s probably the explanation that comes closest to the truth. Not just for Thousand Oaks, but also for Littleton, Las Vegas, Parkland, Orlando, Aurora, Annapolis, Tucson, Sutherland Springs, for all the places where they’ve printed up T-shirts declaring themselves “Strong” after bullets shattered the peace.

Some of us will find the motive the Thousand Oaks shooter offered for his actions difficult to process. Small wonder. This is nihilism too monstrous to be believed. This is anti-life.

Meaning not just the biological processes that cease when a bullet tears through heart and mind, but also all the tiny joys, the little pleasures, the small and not-so-small rituals, that give those processes meaning. The nihilist holds that nothing means anything. That’s why he — almost always “he” — can gaze upon people in a bar, at the movies, going to class, enjoying a concert, worshiping God and see only targets.

“Life is boring,” the shooter wrote, “so why not?”

But life — does this really need saying? — is not boring. That night alone, in that place alone, life was flirting and fellowship and dance, raucous laughter and quiet forgiveness, the clinking of glasses and making of plans, arguments about sports and politics, people being there for one another, there with one another, in tiny joys, little pleasures and rituals small and not so small.

This shooter, like every shooter, killed whole universes of meaning and possibility.

In arrogant disregard of its own bloody truths, America gives the power to do that to virtually every adult. And that power has been used so frequently that many of those in the Thousand Oaks killing field turned out to be survivors of another killing field, the 2017 mass shooting in Las Vegas. One of the Vegas survivors, Telemachus Orfanos, died.

So we are now a nation where mass shootings happen often enough that some people experience more than one. Yet we are told that what we should fear is a caravan of migrants walking through Mexico?

No. What we should fear is the arrogant disregard that will allow yet another massacre to pass without any legislative action to take guns from those who should not have them.

Sunday night, the L.A. Lakers and Atlanta Hawks took to the court wearing T-shirts that said “Enough.” But “enough” was a long time ago. We wait in carnage for our “leaders” to recognize this. We wait for sanity. We wait for ceasefire. We wait.

And whole universes die while we do.

Al Hunt: In the White House, experience really does…