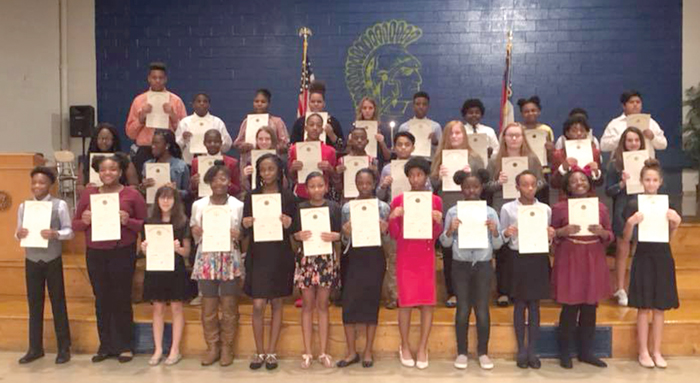 The newest members of the Knox Center for Accelerated Studies Junior Beta Club were inducted in a ceremony Nov. 1 in the school auditorium. With 37 inductees, it has increased the number of club members to 57.

“My vision for Knox Middle School Junior Beta Club is to continuously develop and nurture its members to become leaders, develop interpersonal skills and to provide opportunities for members to help others in need,” said  Thomas. “This will enable them to demonstrate the ideals of Beta — character, achievement, service and leadership within their community,” she added.

Inductees took the Jr. Beta Club Pledge led by athletic director and club adviser Darrin Turner, which was followed with a procession of each new member walking across the stage to accept official National Jr Beta Club certificates and pins.

“All members are encouraged to use their talents to be the change agents that the world needs today, starting within our community,” he said.

Courtwright motivated students to lead by example and think of themselves as the change that will build esteem within the school to extend into the local community.

A reception with cookies and punch was held in the auditorium foyer after the ceremony for the inductees, their guests and club members.