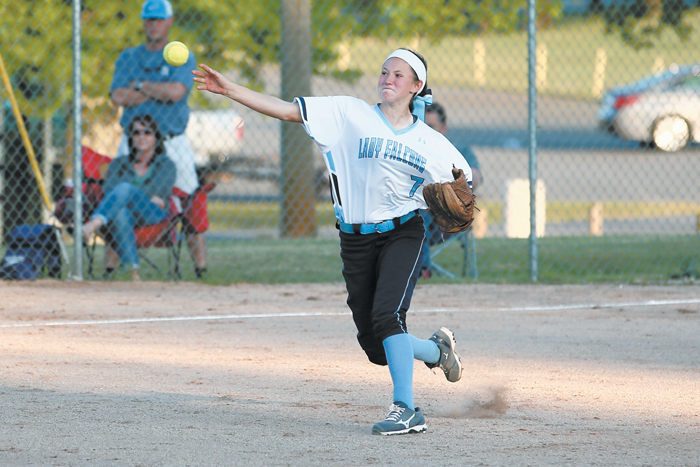 James Sipes file photo/for the Salisbury Post ... West Rowan’s Mary Sobataka is shown in a game against Cox Mill in 2016. Sobataka will play her collegiate softball at Coastal Carolina in Conway, S.C.

MOUNT ULLA — West Rowan’s Mary Sobataka was ready to give Coastal Carolina’s softball program  a verbal commitment five minutes after she first set foot on the campus years ago.

She liked the school in Conway, S.C., that much.

Her official visit to Coastal didn’t occur until last weekend. It convinced her that her first impression was correct.

“That official visit reassured me that I’d made the right decision all along,” Sobataka said. “Coastal Carolina is a place where I fit with the players and coaches. It’s a place where I can hopefully make a difference.”

It’s hard to imagine Sobataka, one of seven girls who officially signed with the Chanticleers on Wednesday, not making a difference. She’s a versatile, cannon-armed defender, and there’s extraordinary power in her bat for someone of slim stature.

She’s already been an all-county cornerstone for three good, Jimmy Greene-coached West teams that have gone 51-22. She’s closing in on 100 career hits. She drives the ball — 33 extra-base hits, including 15 homers.

“She’s blessed with some athletic gifts, but she’s also seen those gifts through,” Greene said. “She’s coachable, she has a great attitude, and she works at softball non-stop in the off-season. That extra work is what got her to this moment today. There aren’t that many athletes who get a chance to sign with a Division I program.”

“Mary brings a tremendous amount of athleticism to our program,” Coastal Carolina coach Kelley Green said. “She can play anywhere in the infield and can hit the ball out of the park to all fields.”

Sobataka says her biggest thrill at West came not from hitting one of those homers, but from being NPC co-champion last season, along with Carson.

“I’ve had a chance to play sports at West with great players like Peyton Greene, Taylor Martin and Khaila Hall, and we learned how to win,” Sobataka said. “And I was lucky to have an older sister (Alison) who always pushed me to be my best.”

Sobataka first became a regular on the Post’s sports pages back in 2014 when she was putting up crazy middle school basketball scoring numbers for Sacred Heart.

She’s been a starter in that sport for West’s Falcons since her freshman year. She has 737 career points in the books.

“I know she’s softball first, but she’s always brought a lot of fight and desire to basketball,” West hoops coach Ashley Poole said. “She’s given us leadership and work ethic, and she’s been a great teammate. The shot she made her freshman year to beat Hickory Ridge stands out, but she’s always stepped up to the plate.”

“I started playing T-ball very young, and as much as I loved basketball, I realized I loved softball more,” Sobataka said.  “To get to where I wanted to be, I needed to make a commitment to a big travel program, and I made that commitment about the time I started high school. I knew it would take a lot of work beyond normal practice to have a chance to play Division I, and I loved softball enough that it wasn’t hard to put in all that extra work.”

Coastal Carolina competes in the Sun Belt Conference and plays a serious schedule. The Chanticleers open this spring against Tennessee.

Division I sports are close to a full-time job, with running, weightlifting, practices, travel and games. Plus, college classes are considerably more demanding than high school.

“It’s going to be a challenge, but it’s a challenge I’m looking forward to,” said Sobataka, who probably will major in business.

Coach Greene is looking forward to Sobataka’s senior season. West should be in business again. Sobataka will be a leader.

“She’s a happy girl who’s in love with the dirt,” Greene said. “There are a lot of good things ahead for her.”