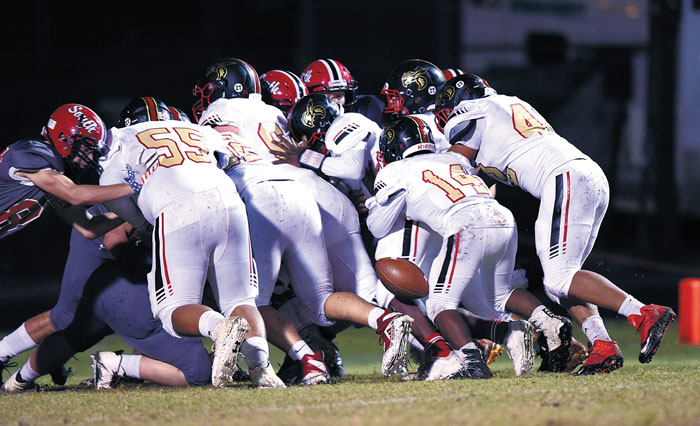 Wayne Hinshaw/for the Salisbury Post ... Salisbury’s offensive line, led by Junior Cruz (55), left, leads the way, but the ball gets away from running back Jaiwon Poole during the win over South Rowan on Nov. 2.

SALISBURY — It’s 6 p.m. on Tuesday, and the weather couldn’t be more distressing or depressing.

Dismal dampness crushes an already waterlogged practice field at Salisbury High. It’s not crazy cold, but it’s chilly, uncomfortable.  So gloomy that someone should be filming the next “Halloween” movie.

Scattered light towers gleam faintly like fireflies, but the SHS Hornets are shapeless shadows as they plow through play after play. They are upbeat despite having every reason not to be.

Head coach Brian Hinson is relentless, his voice non-stop, never berating or belittling, but always pushing. One more rep. And now one more. That was better — now one more.

Head boys basketball coach Bryan Withers, who guides a special group of defensive backs, is giving everything he has to the football squad before he turns his attention to indoor competition.

Logically, the 12th-seeded Hornets (7-4) wouldn’t be toiling like this if they didn’t think they could win their 2AA road playoff game on Friday.

West Rowan got a rough draw and East Rowan got a brutal one, but Salisbury isn’t complaining about a trek to the mountains to face fifth-seeded Ashe County.

The Hornets respect Ashe County’s fine record (9-2) and awesome offensive statistics, but the Hornets expect to be quicker. When mountain teams play Piedmont teams in the playoffs, the Piedmont team generally has the wheels advantage. Sometimes speed kills. At the very least, it gives you a chance.  Ashe County throws it a lot. Maybe one or two of those aerials will wind up in the hands of Salisbury DB Cam Gill, an NCHSAA athlete of the week back in September, and he’ll be gone like a slippery ghost.

“It’s going to be cold and it’s going to be wet at Ashe County, probably a lot colder and wetter than this,” Hinson said, looking around him. “So we’re practicing in this stuff. Hopefully, we can get used to poor conditions.”

Hinson is coaching a young team that got younger recently. The Hornets lost several veterans, lost a chunk of their speed.  Unfortunate decisions were made off the field. Hinson loves those kids, built them up all season, but he did what he felt he had to do. Salisbury moves on without them.

When the Hornets won against Oak Grove at home in the regular season finale, the revised starting 22 included only three seniors. Plus kicker/punter Jack Fisher.

The Hornets lost another senior starter on Wednesday. Left offensive tackle Horacio “Junior” Cruz has been diagnosed with a disc issue in his back.

“I hate it, but better to take care of it now than to not be able to live a normal life 30 years from now,” Cruz said.

So the Hornets will start just two seniors when they arrive at Ashe County’s field in West Jefferson. That’s a two-hour ride by car, but longer by bus.

“We’re on the road,” Cruz said. “But once we get there, both teams play with the same unfriendly weather conditions. Then it comes down to who plays hardest.”

Losing Cruz hurts.  He didn’t play football at all as a junior but made an impact this season.

“I had knee problems last year,” Cruz said. “But I wanted to help the team so I came out this year. One of the first few days that we hit in practice, they told me I’d start at left tackle.”

“I learned a lot from his coaching,” Cruz said. “When an All-American tells you how to do something, you don’t ignore it. I tried to play like he wanted me to, but those were big shoes to fill.”

Cruz, who is listed at 5-foot-11, 255 pounds, assumed a leadership role. He’s not naturally vocal, but he led, anyway.

“By example,” Cruz said. “I tried to always set a good example.”

Cruz won’t be a college football player, but he will be a college student. He hasn’t made a final decision yet on a school or a field of study, but his interests are criminal justice and veterinary medicine.

“Junior was a great asset for us and started every game,” Hinson said. “He’s just kind of an old-style lineman who showed up every day and did everything he was supposed to do.”

Practice ends. Hornets head to locker room laughing and joking. For the youthful Hornets, this is only the beginning. There’s no pressure. Next season, they will be potential powerhouse, and they’ll have their first real opportunity to challenge Ledford and North Davidson for supremacy in the Central Carolina Conference. They are aware that the future is brighter than the past.

Hinson, like countless high school football coaches before him,  concluded Tuesday’s practice by telling his huddled team what a joy it is to practice football on Thanksgiving.

That’s something the Hornets will get to experience if they can go up the mountain and return home with an upset victory.

Memories 1280 will broadcast the action.