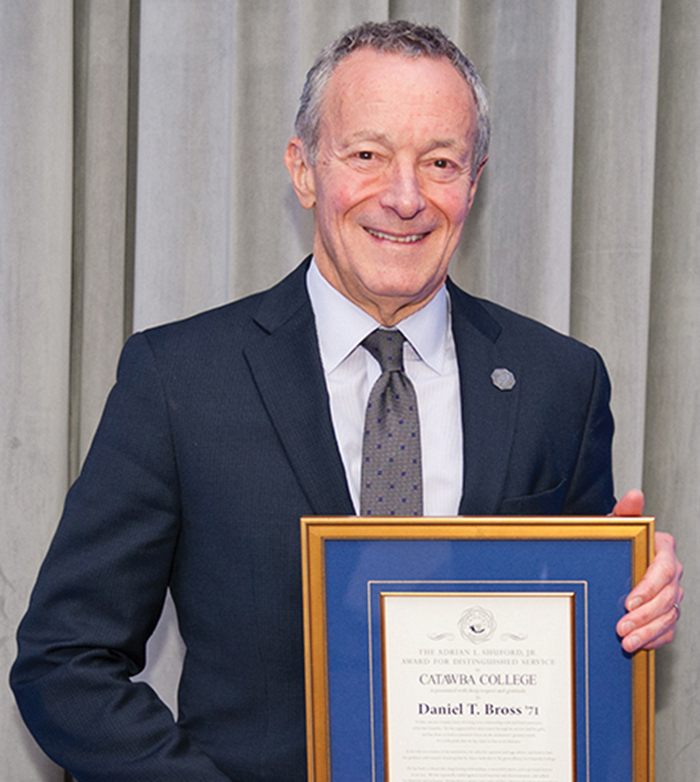 Daniel Bross is the 2018 recipient of the Adrian L. Shuford Jr. Award at Catawba College.

Catawba alumnus and trustee Daniel T. Bross of New York was honored Sunday as the 2018 recipient of the Adrian L. Shuford Jr. Award for Distinguished Service.

Bross, who is co-chairman of Catawba’s recently launched $38.2 million Mind Body Soul Campaign, was presented the award by college President Brien Lewis during an 1851 Society celebration for major donors. It was held in Peeler Crystal Lounge of Robertson College-Community Center.

In recognizing Bross, Lewis noted that he has “repeatedly railed against social injustice and discrimination and rallied for diversity and inclusion.”

“He has been a strong voice and a tireless advocate for those marginalized and voiceless, especially in the LGBTQ community. Using his skills, his intellect, and his sense of fairness, he has demonstrated time and again the value and importance of difference in an evolving world of change,” Lewis said.

Bross came south to attend Catawba from his family’s farm in rural Pennsylvania. He majored in political science, served as student government president during his senior year, and was a student of Professor Sanford Silverburg. It was Silverburg, Lewis explained, who instilled in Bross “a need to live a life of purpose, who made him realize that his work needed to make a difference.”

After graduation, Bross served in the Air Force Reserves, taught junior high school history, and earned his master’s degree in public administration from George Washington University. He worked on Capitol Hill as a legislative assistant for a member of Congress.

He worked for a time with his brothers in his father’s business and ran for political office in his home state of Pennsylvania but lost to a longtime incumbent.

Returning to Washington, he became a lobbyist with a Houston-based energy group. That job took him to Houston, where he led the company’s state government and community affairs group.

It was in Houston that Bross came to terms with being a gay man during a time when homophobia was rampant and as fears of AIDS and HIV were national and even international news.

He decided to put his skills as a lobbyist and his knowledge of government affairs to work combating HIV and AIDS and the fear and discrimination that surrounded the disease. He left Houston and spent the next 10 years working on HIV/AIDS issues in California, New York and Washington. He was executive director of the AIDS Action Council from 1990 to 1995.

In 1998, he was hired by Microsoft and worked in its government affairs group until 2002, when he was promoted to create the company’s corporate social responsibility program.

When he retired in 2016 from Microsoft, he was senior director for business and corporate responsibility and had a wealth of global experience with a wide range of international organizations.

Today, Bross continues as an advocate for diversity and inclusion, particularly in the LGBTQ community. And, Lewis added, he lends his time and expertise to his alma mater.

Bross was recognized by Catawba with its O.B. Michael Award in 2016 and the Distinguished Alumni Award in 1996. He was named to Catawba’s board of trustees in February 1997.

Named in honor of the late Adrian L. Shuford Jr. of Conover, a businessman and a long-serving member of the board of trustees, the Shuford Award for Distinguished Service is presented annually to individuals whose actions and generosity to both the college and their communities emulate those of Shuford. Originally named the President’s Award for Distinguished Service and first presented in 1983, the award was renamed to honor Shuford in 1984.