Steelers’ Bell refuses to sign tag, out for 2018; Chiefs-Rams game moved to LA 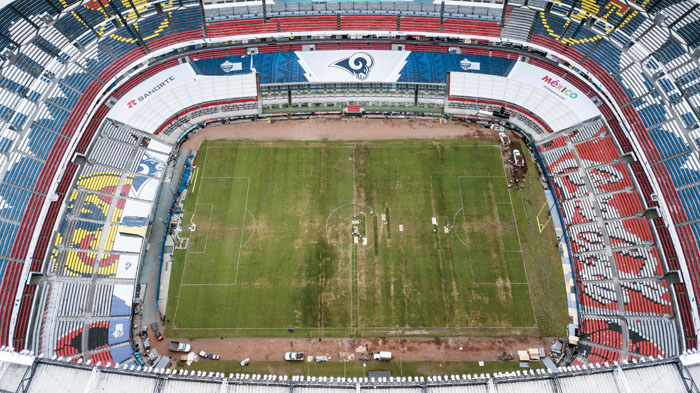 Mexico's Azteca Stadium is seen from above in Mexico City, Tuesday, Nov. 13, 2018. The NFL has moved the Los Angeles Rams' Monday night showdown with the Kansas City Chiefs from Mexico City to Los Angeles due to the poor condition of the field at Azteca Stadium. (AP Photo/Christian Palma)

In a game built on chaos, the star running back rarely hurries or makes hasty decisions.

His ability to put his hand on the back of an offensive lineman while waiting for the hole to open — much like a child sticking close to a parent in a crowded store — helps him make the remarkably difficult at times look remarkably easy.

His career at a crossroads partly of his own making, Bell will have to rely on that patience now more than ever after the two-time All-Pro declined to sign his one-year, $14.4 million franchise tender with the Pittsburgh Steelers by Tuesday’s deadline, making him ineligible to play for the AFC North leaders or anyone else this season.

The unprecedented move sets Bell up for the potentially big-time payday he has long been searching when he becomes a free agent in the spring, provided there’s a team willing to splurge on one of the league’s more talented if mercurial players.

While TV cameras set up outside the team’s practice facility on Tuesday to catch Bell if he decided to show up for work for the first time in nearly 10 months, the 26-year-old never pulled up to the gates, ending — for now — one of the more unusual labor standoffs between a team and a player in the era of free agency.

Pittsburgh coach Mike Tomlin seemed resigned to Bell’s decision shortly before the 4 p.m. deadline, saying simply “so be it” when asked about the possibility of Bell not returning to the team that selected him in the second round of the 2013 draft and helped mold him into one of the league’s most dynamic threats.

“Even when we don’t understand it, we’re sensitive to it, so we’re not shocked when things happen from a business standpoint, no,” Tomlin said.

The Steelers (6-2-1), who have won five straight to sprint to the top of the division heading into a visit to Jacksonville on Sunday, will turn to second-year back James Conner and reserves Stevan Ridley and rookie Jaylen Samuels to help shoulder the load with Bell out of the picture.

Conner, third in the NFL with 771 yards rushing, remained in the concussion protocol on Tuesday after leaving last Thursday’s blowout win against Carolina but could practice as early as Wednesday.

All season Tomlin stressed he was focused on the players in the locker room and not the ones outside it. He hardly seemed bothered by the idea of Pittsburgh’s quest for a postseason berth continuing without Bell.

The Steelers drafted Bell with the 48th overall pick five years ago, won over by his youth, size and versatility. Along with wide receiver Antonio Brown, Bell became the linchpin in which the Steelers rebuilt themselves on the fly as the franchise’s identity shifted from away from the defense that fueled three Super Bowl appearances in six years from 2005-2010 toward an offense that ranked among the most explosive in the league.

As his profile rose, Bell insisted he wasn’t merely a running back, pointing to his success as a receiver — he finished 10th in the league with 85 catches in 2017 — as proof that he should be paid far above his peers.

When Bell and the Steelers failed to reach an agreement on a new deal last summer, he said “both sides worked extremely hard” in an attempt to get something done. When it didn’t happen, he skipped training camp again, just as he did in 2017. His teammates stressed it was no big deal, confident Bell would show up in time for the regular-season opener.

Only he didn’t. And when preparations for Pittsburgh’s Week 1 trip to Cleveland began without Bell, several Steelers — particularly the offensive line — vented their frustrations publicly.

Though the team could use the franchise or transition tag on Bell next spring, it’s more likely he’ll just walk away.

LOS ANGELES (AP) — The NFL moved the Rams’ Monday night showdown with the Kansas City Chiefs from Mexico City to Los Angeles on Tuesday due to the poor condition of the field at Azteca Stadium.

The league announced the extraordinary decision six days before one of the most-anticipated regular-season games of the year.

In a news release, the league said it determined that the recently re-sodded field at Mexico City’s historic stadium “does not meet NFL standards for playability and consistency, and will not meet those standards by next Monday.”

The Rams (9-1) will host the Chiefs (9-1) at the Coliseum instead. The much-anticipated game is just the fifth meeting since 1970 between teams with one or fewer losses in Week 11 or later.

The decision creates a morass of logistical concerns for the teams and fans traveling to Mexico, and it disappoints thousands of Mexican fans eager to see a marquee matchup in North America’s most populous city. But the league consulted with the players’ association and local officials before deciding it couldn’t risk the players’ health on a damaged field.

“The combination of a difficult rainy season and a heavy multi-event calendar of events at the stadium have resulted in significant damage to the field that presents unnecessary risks to player safety and makes it unsuitable to host an NFL game,” said Mark Waller, the NFL’s executive vice president of international. “As a result, we have determined that moving the game is the right decision, and one that we needed to announce now in order to allow our teams and fans to make alternate arrangements.”

Azteca officials changed the playing surface from natural grass to a hybrid in May, but the turf hasn’t been ideal for several months. Concern about the field grew in recent days when aerial photos of the stadium showed serious damage to the grass, particularly on the end of the stadium recently used for a major concert.

Cruz Azul, the Liga MX soccer club that shares the stadium with Club America, played a tournament game on the field last Saturday in noticeably poor conditions. Coach Pedro Caixinha expressed concern, and the NFL continued working with groundskeepers to improve the field.

“The long and unusual rain season, as well as the calendar of events with third parties in Estadio Azteca, might be a factor for the grass to be far from optimal conditions,” Azteca Stadium authorities said in a press release.

The Rams are required to keep the Coliseum available as a backup in case of a problem with international games. They immediately announced plans for ticket sales starting Wednesday, with season ticket holders allowed to buy their own seats and up to four more.

The Rams also will give away thousands of seats to first responders and people affected by recent tragedies in Southern California. Deadly wildfires have ravaged several areas near the Rams’ training complex in Thousand Oaks for the past week, and 12 people were killed in a mass shooting in Thousand Oaks last Wednesday night.

The move also creates big logistical obstacles for “Monday Night Football” broadcaster ESPN, which will have to shift its operations back to the West Coast.

“We have been in communication with the NFL and we understand the league’s decision,” the network said in a statement. “We are already in the process of adjusting our plans and will be ready to present this much-anticipated matchup on Monday Night Football from Los Angeles. We also remain committed to identifying future opportunities with the league to engage its already strong fan base in Mexico.”

Azteca hosted the first regular-season game ever held outside the U.S. in 2005 when Arizona beat San Francisco. The stadium has hosted several NFL exhibitions, and the Oakland Raiders, Houston Texans and New England Patriots all played regular-season games there over the past two years.

The Rams played in England in each of the previous two seasons, and they are expected to have another international game next season, as required of teams playing in a temporary home stadium.

Both the Rams and the Chiefs were due to play in Mexico for the first time next week. Kansas City has played just one regular-season game outside the U.S., going to London in 2015.

The Rams are in the third of four seasons at the Coliseum before their new multi-billion-dollar stadium complex in Inglewood opens in 2020. The venerable Coliseum hasn’t hosted a “Monday Night Football” game since October 1985, and the Rams haven’t hosted a game there on a Monday night since 1979, before they moved to Anaheim and then St. Louis.

The Rams traveled to Colorado Springs, Colorado, on Monday to spend their week of practice in high altitudes to prepare for Mexico City’s conditions — and they plan to stay put anyway.

Several players and coaches are still displaced from their homes near their training complex in Thousand Oaks by evacuations due to fire danger, and the Rams already transported the families and friends of many players and employees to Colorado Springs. The Rams currently plan to fly home on the weekend.