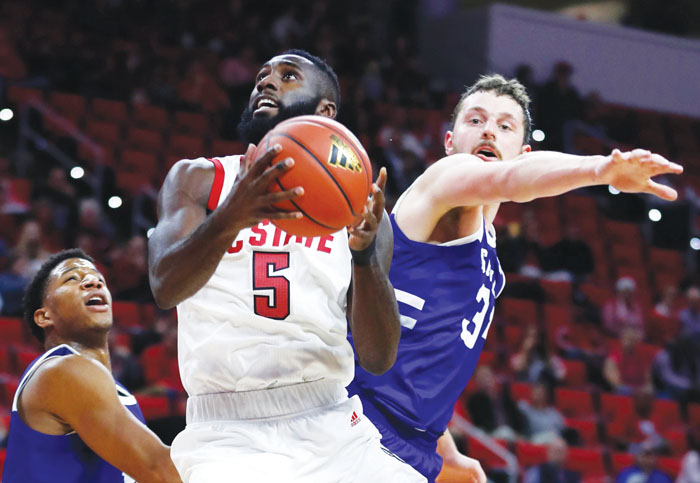 RALEIGH (AP) — Devon Daniels didn’t fret or change much after a pair of bad offensive outputs to start his North Carolina State career.

Rather, he took a simple mindset: play hard.

The Utah transfer scored 20 points to lead the Wolfpack’s latest high-scoring performance, a 100-49 win against UNC Asheville on Tuesday night.

“I think I was just overthinking it,” Daniels said. “I was focusing on just fitting in with the team and getting comfortable. Tonight I focused on playing really hard and trusting my teammates, and I think that helped a lot.”

Daniels led an easy night for the Wolfpack (3-0), though the team lost starting point guard Markell Johnson to an early injury and played with a shorter rotation the rest of the way.

Daniels, a 6-foot-5 sophomore who sat out last year to satisfy NCAA transfer requirements, scored a combined 14 points while making 6 of 19 shots (32 percent) and 1 of 10 3-pointers in the first two games. He made 8 of 16 shots Tuesday, though only 1 of 5 from behind the arc, to go with nine rebounds in 26 minutes.

“I thought he relaxed,” second-year Wolfpack coach Kevin Keatts said. “I thought he was more comfortable tonight. I thought he played off his teammates and I’m happy for him.”

Tajion Jones scored 21 points for the Bulldogs (1-1), who missed 13 of their first 15 shots to get in a fast hole and committed 24 turnovers — several coming in the backcourt against pressure. The Wolfpack converted those into 33 points.

“We were able to do a decent job in the first half of guarding them, when we didn’t give them the ball,” UNC Asheville first-year coach Mike Morrell said. “Against a team like that, your defense really starts on offense by not just allowing them runout dunks and layups.”

N.C. State: Add another lopsided win for a team that outscored its first two opponents 200-104, though Johnson’s departure — along with the recent transfer of freshman forward Ian Steere after 5 minutes of opening-night action — left the Wolfpack with nine players for most of this one.

Johnson, last year’s ACC assists leader, left at the 16:24 mark after being blindsided by a backcourt screen from Jeremy Peck. He was down for a time and wobbly while being helped off the court. He was quickly ruled out and didn’t return to the bench until the second half.

Keatts said afterward that Johnson would be evaluated by doctors Wednesday, but added Johnson wasn’t diagnosed with a concussion.

Wolfpack freshman forward D.J. Funderburk missed a baseline jumper with 2:56 left before halftime, the first miss of his career after a 9-for-9 start through the first two games.

“I said ‘You let me down’ because I told everybody he was going to go the whole year and not miss a shot,” Keatts quipped. “And he did.”

Funderburk finished with 11 points on 4-for-6 shooting.

UNC Asheville: The Bulldogs travel to Northern Kentucky on Friday.

N.C. State: Home comfort continues for the Wolfpack. N.C. State hosts Maine on Saturday in its six-game homestand to open the season.