Georgie Ann Geyer: Remembrance in the midst of endless war 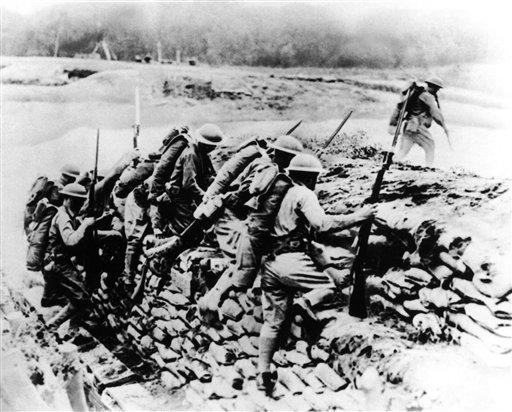 World War I came to an end on Nov. 11, 1918, when the signed armistice came into effect, but the aftermath of the war is still with us. The United States, which sent thousands of doughboys to fight in France like those shown charging over the top of a trench, in 1917, emerged a reluctant leader of the world. (AP Photo)

WASHINGTON — By all accounts, it was a fine Armistice Day remembrance.

The futile massacres in the Great War were commemorated last weekend with appropriate somberness on the 100th anniversary of the 1918 armistice. World leaders marched down the Champs Elysees in Paris to honor the 16 million killed in World War I. TV channels unrelievedly churned out one heartbreaking war film after another, until one wanted to cry out like a child, “Give me Doris Day, give me Fred Astaire, give me Mr. Rogers!”

Our president did not emerge as anyone you would exactly erect a statue to in Belleau Wood. He stayed in out of the rain. Indeed, his demeanor throughout was that of a mafia don set down and forced momentarily to behave at a ladies’ lunch.

There are some profound questions about American ideas of warfare that need to be examined during this historic week.

The cry that took hold after 1918 was, of course, that the Great War had been the “war to end all wars.” We know what happened there. But another cry also came out of President Woodrow Wilson’s doomed idealism: “Peace without victory.” And this one can be useful to us today.

While the armistice remembrances were duly being observed in Paris, in Afghanistan the Taliban was routing and massacring American-backed Afghan troops. Indeed, The Wall Street Journal reported that the conservative Islamic Taliban was “stronger than any time since an American-led military coalition deposed them 17 years ago.”

In Iraq, a major story revealed the U.S. Army had refused to release a study, “The United States Army in the Iraq War,” apparently dealing with mistakes made in trying to establish a political state there after the 2004 invasion.

Of Yemen, where the U.S. has no known troops but has been decisive in furthering the brutal Saudi war and bombing of that poor, small nation, the respected American Secretary of Defense James Mattis stated, in his strongest language to date, that “the tragedy of Yemen worsens by the day.”

Meanwhile, we have troops all over Africa now, our newest area of interest being the Horn of Africa. We now have a base (one of 800-plus worldwide) in Djibouti, the last French colony in Africa. And President Trump, pushed by the relentless Israeli right and his own odd and unformed presidential military pretensions, keeps warning of getting into a war with Iran.

Phil Klay, veteran of the U.S. Marine Corps and author of “Redeployment,” wrote most touchingly of this syndrome in The New York Times: “There’s something bizarre about being a veteran of a war that doesn’t end, in a country that doesn’t pay attention.”

Yet, after all the somber music in Paris and the fine talk, there is one thing we can probably all agree on: The Great War gave us an entire generation of great, if endlessly sorrowful, British poetry. My favorite is from A.E. Housman:

“Here dead we lie, because we did not choose

“To live and shame the land from which we sprung.

“Life, to be sure, is nothing much to lose,

“But young men think it is, and we were young.”

We as Americans in this great country, despite its superior serving soldiers, are no longer young. We should be demanding maturity from our leaders: Who is making our military decisions? Who are the foreign interests? Just tell us, please: Why should we die for Djibouti?

These questions do not signal ignorant isolationism, nor any intention to retreat from the world. They are instead posed out of the eternal need for balancing a nation’s capacities with the ambitions of its leaders, who perhaps should sit down and read St. Augustine’s philosophy of proportionality and Carl von Clausewitz’s warnings of military overreaching.

In fact, these questions represent what should be the most sophisticated and moral considerations — and principles — of a great power that, in the flick of a historical eyelid, could become an infinitely lesser one.

The real duty this fall is to ask not what was in the Europeans’ hearts that yesterday 100 years ago — we may never know that — but what is in our minds, our hearts and our own spirits today. And to demand that somehow we get our leaders to listen to us.

Georgie Anne Geyer has been a foreign correspondent and commentator on international affairs for more than 40 years. Email her at gigi_geyer@juno.com.