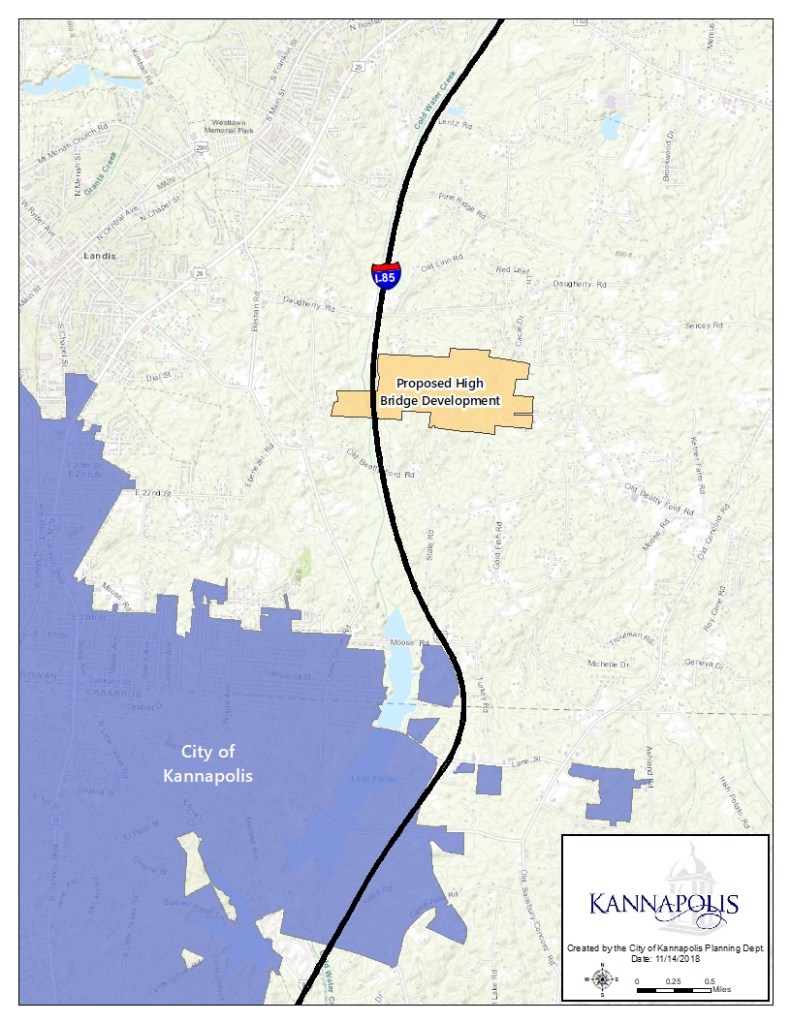 Note: A map published in Wednesday’s Post was incorrect. An updated version of the area to be annexed is included here.

SALISBURY — With their eyes on a potential $500 million increase in the tax base, leaders of Rowan County have signed an interlocal agreement with Kannapolis to extend water and sewer service to a 318-acre site along the new Old Beatty Ford interchange.

The agreement, approved by the county commissioners during a special meeting Tuesday, obligates the county to contribute $1 million for the project alongside $2.7 million in debt forgiveness. The agreement also requires that the site be annexed by Kannapolis.

The annexation would include only the land to be developed, with no current residences or businesses affected, Commissioner Craig Pierce said during the meeting.

In exchange, Kannapolis will assume all the risks and responsibilities for the project, including financing, design and construction of the infrastructure extension.

The extension will be for water and sewer service to an area called the “High Bridge Site.” The site has been under contract to Louisiana-based Commercial Properties Realty Trust since March.

Commercial Properties CEO Carolyn Martin met with the commissioners at their March 1 planning session, detailing her vision for the development. It would include 500,000 to 1 million square feet of commercial space and 600 residential units, Martin said.

Dari Caldwell, president of Novant Health Rowan Medical Center, also commented on the project, saying it could be the site of an ambulatory care center serving southern Rowan County.

Water and sewer will be all it takes to make that area “explode,” Martin said.

According to the agreement, Commercial Properties intends to “develop the property for a multitude of residential and nonresidential purposes,” contingent on the water and sewer extension.

The county will contribute $500,000 of the $1 million within 60 days of completion of a development agreement between Kannapolis and the developer. The remaining $500,000 will be paid upon completion of the project.

Commissioners Chairman Greg Edds estimated it could be 18 months between the two payments.

Upon project completion, the county will release Kannapolis from an outstanding debt obligation of nearly $2.7 million for the purchase of its minor league baseball stadium.

Kannapolis now has 90 days to complete a development agreement with Commercial Properties Realty Trust. The county’s agreement would be void should no progress be made within 180 days.

While updated cost estimates have not been figured, Kannapolis Mayor Darrell Hinnant said the cost of the expansion would come from the city’s water and sewer enterprise fund.

The Kannapolis City Council will vote on the agreement at their meeting on Nov. 26.

Edds said that three weeks ago, the county had no clear path to extend water and sewer in the southern end of the county. Thanks to the agreement with Kannapolis, it’s happening, he said.

“This opportunity was … too good for us to pass up. It does for us what we want it to do: It kicks off that interchange,” Edds said. “What happens from there, we don’t know. We fully believe this will be a huge benefit to Landis, … to China grove, to all of the municipalities of Rowan County.”