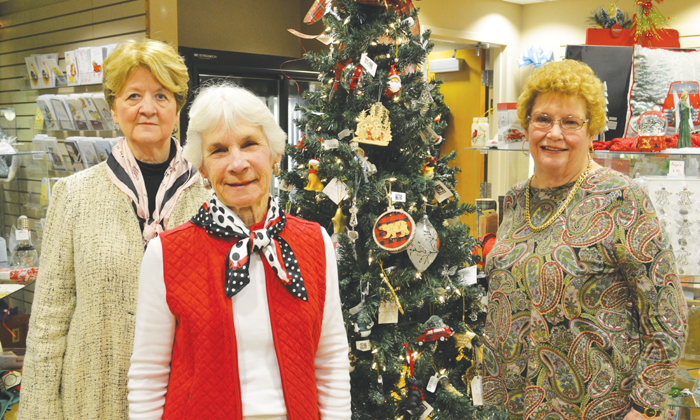 Most of the year, members of the Novant Health Rowan Medical Center Auxiliary quietly go about their work, volunteering in the gift shop and donating money to hospital project. The Tree of Hope is the group’s most visible fundraiser. From left are auxiliary members Georgia McCorkle, Barbara Waggoner, and Sue Bryan. Susan Shinn Turner

SALISBURY — For most of the year, members of the Novant Health Rowan Medical Center Auxiliary are pretty low-key, quietly working in the gift shop and making donations to support the work of the hospital.

But not during the holiday season. Each year, the auxiliary sponsors Tree of Hope, one of its largest — and most visible — fundraisers.

The tree will be lighted at 5 p.m. Dec. 6, and for a $10 donation, anyone can honor or memorialize a loved one.

The auxiliary includes about 30 women who all have the same goal, says Georgia McCorkle, president.

“One of the things we all have in common is a desire to make a difference,” McCorkle says. “Our members realize there’s a need in them to serve the needs of others.”

“It’s a joy,” says Barbara Waggoner, who’s served for 46 years and is one of four life members of the auxiliary, along with Gussie Ryan, Carolyn Hood, and Blanche Glover.

Jewel Ziprik is an inactive member.

Sometimes, Waggoner says, you just stand and listen to a visitor who needs to talk.

“Everyone at this hospital has a story,” she says. “We are ambassadors for this place and for the people who work here.”

Over the years, the auxiliary has made contributions both large and small to the hospital.

“We will contribute heavily to the new cancer center,” says Sue Bryan, another auxiliary member.

The auxiliary is self-sustaining thanks to its gift shop. All profits go toward hospital projects. Manager Sandy Morrison is the shop’s only paid employee. The auxiliary pays her salary, and the hospital pays her benefits.

“She deserves a medal,” Waggoner says, because Morrison has many “bosses.”

“The auxiliary has been wonderful to work for,” Morrison says. “They are unselfish and giving. They are a bunch of caring, kind people.”

McCorkle credits the founders of the auxiliary, which was started in 1936, for providing a mission for the group that continues today.

Waggoner is a second-generation member. Her mother was the late Addie Robison.

So is Zandra Spencer, the daughter of the late Evelyn Harrison. Robison and Harrison were longtime “gray ladies.”

“My mother always said she was the best customer in the gift shop,” Spencer says, laughing.

Spencer was recently asked to join the auxiliary board.

“I knew if I didn’t say yes, a bolt of lightning would come from above,” she says. “This is a wonderful place to be.”

The volunteers, Morrison says, are key to the gift shop’s success, filling 20 slots per week. The shop is open from 10 a.m. to 5 p.m. Monday-Friday. The auxiliary members say Morrison wants to make sure every shopper leaves with a bag.

“You know the money is going to help others,” Morrison notes.

But it’s about more than shopping, the women say.

“We’re just that little corner that people come to and want us to listen,” she says.

She often tells guests, “Come back when you need another break.”

The Tree of Hope, McCorkle says, has a number of repeat donors from year to year. Everyone who’s donated gets a letter in early November, inviting them to be a part of the current year’s effort.

Tree of Hope donors are listed three times in the Salisbury Post, the first time in early December.

“Once contributors know about it and catch the spirit, they look for the opportunity to give,” McCorkle says.

The Tree of Hope project typically raises between $8,000 and $10,000 each year. This year, money raised will go to the Wallace Cancer Center.

“We want to be a part of making this happen,” Waggoner says.

“It’s a win-win situation for the donor and the recipient,” McCorkle says of the fundraiser, because are notified about the donation. “It’s a circle of positive feelings, and it’s a way to benefit everyone involved.”

Donation forms for the Tree of Hope are available in the hospital’s gift shop. Anyone who wants to contribute should contact Georgia McCorkle at peachteach2002@yahoo.com.