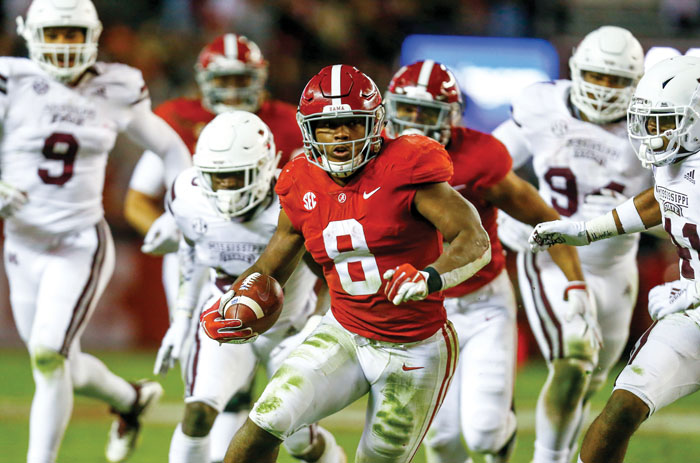 Alabama running back Josh Jacobs (8) carries the ball during the second half of an NCAA college football game against Mississippi State, Saturday, Nov. 10, 2018, in Tuscaloosa, Ala. (AP Photo/Butch Dill)

The third rankings of the season were drama-free Tuesday night after every top-10 team won last weekend. In fact, the selection committee’s entire top 10 stayed the same, the first time that has happened in the five seasons since the CFP was born.

With three weekends left until the final selections are made on Dec. 2, Georgia was fifth and Oklahoma was sixth. LSU, Washington State, West Virginia and Ohio State rounded out the top 10.

UCF moved up one spot to No. 11 and remained the highest-ranked team from outside the Power Five conferences. The Knights on Saturday play Cincinnati, which is ranked or the first time by the selection committee this season at No. 24.

In the four-year history of the College Football Playoff, the four teams at the top of the rankings after three weeks have never all made it to the semifinals. As much as it might feel as if the field is well set, it would be best to expect an unexpected result or two over the next three weeks.

Three not-so-outlandish upsets that could create confusion for the selection committee:

This could lead to the most controversial call in CFP history. The Crimson Tide is the defending national champion and Tua Tagovailoa and Co. have been stomping everyone in their path. The Tide is not losing this week to The Citadel. The chances are slim Auburn beats ‘Bama at home. But even if that were to happen, Alabama could quickly redeem itself by beating Georgia to win the SEC on championship weekend. A 12-1 SEC champion Alabama is not getting left out of the playoff, nor should it under any available circumstances this season.

But 12-1 without an SEC championship? The committee has already twice sent teams that did not reach their conference title games to the playoff. Last year it was Alabama and the year before, Ohio State got there.

In Ohio State’s case, the body-of-work argument was strong enough to overcome being bumped from the Big Ten title chase by Penn State, a team the Buckeyes had lost to in a close game at Happy Valley. Last year, Alabama seemed like a default pick at 11-1 over Ohio State and USC. Both were 11-2 with conference titles, but ugly losses on their ledgers.

Could the committee squeeze in the Tide after a loss to Georgia, which would obviously get in, if Clemson, Notre Dame and Michigan (and maybe even Oklahoma) all won out? It’s not as if Alabama would have a loaded resume.

, with victories against LSU, Mississippi State and Auburn at the top. But there is also little doubt Alabama would be favored on a neutral field against any team in the country.

The committee has to be rooting for the Tide to keep it out of this mess.

Big 12 fans will disagree, but Michigan at 12-1 looks like a good bet to sail into the playoff — especially if Notre Dame finishes unbeaten, therefore making the Wolverines’ only loss a one-score game in the opener at South Bend. The Buckeyes have nice road victories against Penn State and Michigan State. Add Michigan and Northwestern in the Big Ten championship game to that resume, and suddenly a season of struggles in Columbus, Ohio, won’t look so bad at all. The stain of that blowout loss at Purdue won’t come off easy, though, and choosing between Ohio State at 12-1 and Oklahoma at 12-1 or West Virginia at 11-1 or Washington State at 12-1 won’t be such an easy chore for the committee.

Any loss for the Irish looks problematic if the rest of the contenders win out. Michigan could help Notre Dame by finishing 12-1. The Irish could make the case the committee can’t put the Wolverines in and leave out the one team that beat them. Don’t let anyone tell you the Irish are out with one loss. That’s shortsighted and doesn’t take into account that Big 12 contenders Oklahoma and West Virginia and Washington State could easily pick up a second loss before they even reach their conference title games.

Still, the Irish at 11-1 pits them against any other once-beaten conference champion, while also possibly forcing the committee to justify putting Michigan in and leaving the Irish out. And if Notre Dame’s loss is to USC, it could put a spotlight on Washington State’s poorly officiated loss to the Trojans back in September by virtue of comparing common opponents.

Follow Ralph D. Russo at https://twitter.com/ralphDrussoAP and listen at https://www.podcastone.com/AP-Top-25-College-Football-Podcast