Taking sides: What to have with the turkey 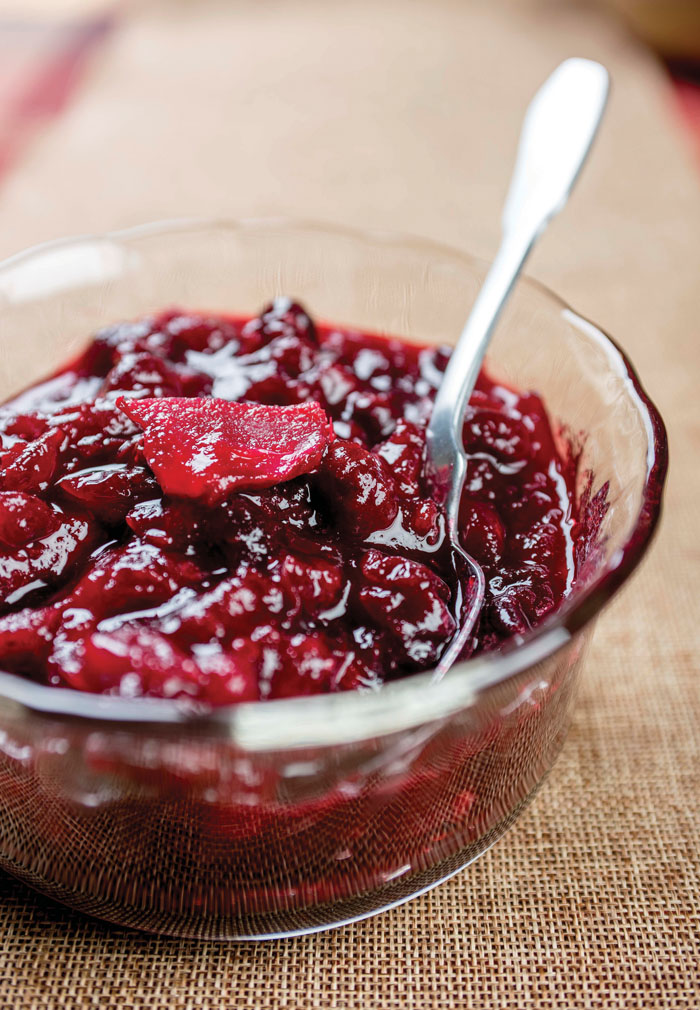 We love our mashed potatoes, stuffing and cranberry sauce. Turkey is good, but what makes us crave that overindulgent Thanksgiving meal is really the sides.

Now that everyone seems to be on some kind of specialized diet, it can be hard to please the entire table.  People have given up carbs or meat or fat, or they’re embracing heavy protein or raw foods.

So here’s a mix of traditional foods with a twist and a couple of new tricks.

We tried the Wild Rice Pilaf, and it’s good, and filling. It came from Diabetic Living Magazine, so it has health in mind. Wild rice isn’t rice at all, but the seed of a grass, and brown rice has more nutrients and fiber than white rice.

Mushrooms add flavor and texture, as do the carrots. If you don’t like light sour cream, try Greek yogurt, or just dollop a teaspoon of sour cream on each serving. This recipe will feed a crowd. One option for the leftovers is to mix in pieces of turkey and serve it as a main dish, with a salad on the side. You won’t go away hungry.

It took some shelf searching to find a small box of wild rice, but you can get a small bag of brown rice for around $1.60. The wild rice was more expensive, but its texture is important to the pilaf. We cooked it on high in the slow cooker for 4 hours, and it was tender and creamy.

Trick up the cranberry sauce any number of ways. We used the zest and juice of two oranges, along with a little water, to cook the cranberries. While they simmered, we added 3 slices of potent fresh ginger, a cinnamon stick and just under  one-quarter teaspoon of ground cloves. We also cut back from 1 cup of sugar to two-thirds, because the tartness of cranberries is a good foil for the other, heavier foods.

The cranberries were so good that the sauce is worth making any time of year. It’s good with ham or another kind of pork; it would be great with chicken. Spread it on an English muffin or stir it into your oatmeal.

The problem with some sides is oven space, so whatever you can do on the stove top is a plus. And using the slow cooker also helps. 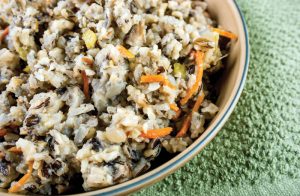 Before serving, stir in sour cream.

Can also use a disposable slow cooker liner. Once dish is finished, spoon the food into a serving dish and toss the liner. Do not move food from cooker by picking up liner.

This is from Diabetic Living Magazine and will serve at least 12.

Bring the water and sugar to a simmer in a medium saucepan over medium-high heat, stirring until the sugar is completely dissolved. Add the cranberries and bring to a boil. Reduce the heat and simmer until the cranberries pop open and become translucent, about 15 minutes.

Here’s where to make it all your own:

Spices: Add a cinnamon stick, cardamom pod or slices of fresh ginger to the water and simmer with the cranberries. Remove before serving. Add 1/2 tsp. of cinnamon, 1/4 tsp. nutmeg or 1/4 tsp. cloves.

Add a vanilla bean to the water and simmer with cranberries. Remove before serving.

Citrus juice and zest: Add the zest of an orange (no white pith). Use the juice of the orange in place of the water or use a little of both.

Alcohol: Stir in 1 Tbsp. of rum, brandy, orange liqueur or whiskey to the finished sauce.

Toss in dried figs, cherries or cranberries to the warm mixture for extra texture and flavor. Add a handful of chopped pecans or walnuts to the finished sauce.

Or add a cinnamon stick, nutmeg, cloves, orange and candied ginger and 1 Tbsp. of Grand Marnier for a sauce that will be velvety and unforgettable.

I’ve got to put in a plug for Brussels sprouts, whose cabbage-y flavor I enjoy. There are so many ways to cook them or use them in salad, and roasting them is absolutely the best way I’ve tried. This recipe is simple and could be made while the turkey is resting and you’re perfecting your gravy. Just do the prep early.

Arrange a rack in the middle of the oven and heat to 425 degrees. Trim the bottoms from the sprouts and peel away the loose outer leaves. Cut each one in half through the stem.

Place the Brussels sprouts on a rimmed baking sheet. Add the oil and toss to coat. Season with salt and pepper and toss again. Arrange cut side down.

Roast, stirring halfway through, until the leaves are dark brown and crisp and the cut side is browned, 25-30 minutes. With about 5 minutes baking time left, combine the vinegar and honey and sprinkle over the sprouts. Toss to coat, finish cooking and serve.

Want green beans but don’t want them to be boring? Try these from Ina Garten. They cook on top of the stove.

Bring a large pot of water to a boil. Add the green beans and blanch them for 2-3 minutes, until tender but still crisp. Drain the beans in a colander and immediately put them in a bowl of ice water to stop the cooking and preserve their bright green color.

For the gremolata, toss the garlic, lemon zest, parsley, parmesan and nuts in a small bowl and set aside.

When ready to serve, heat the olive oil in a large sauté pan over medium-high heat. Drain the beans and pat them dry. Add the beans to the pan and sauté, turning frequently, for 2 minutes, until coated with olive oil and heated through. Off the heat, add the gremolata and toss well. Sprinkle with 3/4 tsp. salt and1/4 tsp pepper and serve hot.

Here’s a side that doesn’t require cooking

Combine shallot, mustard, vinegar, pepper and salt in a large bowl (or small bowl, if making ahead) Whisk in oil until well combined.

Just before serving, add greens, celery, apple, cheese and pecans. Toss gently until greens are coated with the dressing.

Do you have vegetarians coming to your feast?

Sure, they can eat the sides, but why not offer this filling dish?

Remove the stems from the portobello mushrooms. Set the caps aside and chop the stems.