Leonard Pitts: What journalists do 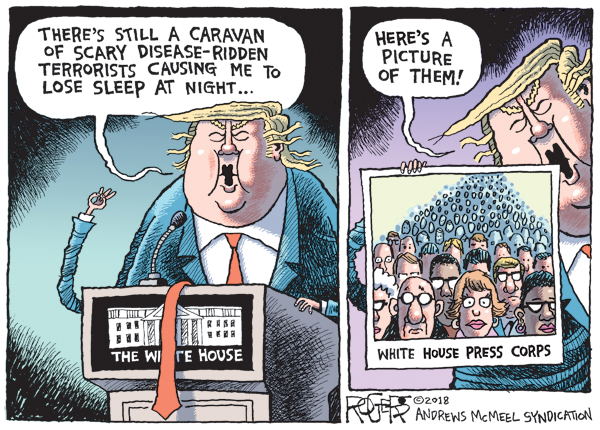 “The fact that a man is a newspaper reporter is evidence of some flaw in character.” — Lyndon Johnson

“They are a sort of assassins…” — John Quincy Adams

“I look forward to these confrontations with the press to kind of balance up the nice and pleasant things that come to me as president.” — Jimmy Carter

“The president of the United States will not stand and be questioned like a chicken thief by men whose names he does not even know.” — Herbert Hoover

“I rarely think them worth reading, and almost never worth notice.” — Thomas Jefferson

Our topic du jour: What Journalists Do.Consider it a public service for the benefit of Failed President Trump. As he reminded us Wednesday in a characteristically bizarre news conference, he has not a clue.

First, CNN reporter Jim Acosta tried — Trump kept interrupting him — to ask about the propriety of designating a caravan of refugees an “invasion.” But the rude president called Acosta rude for the questions he asked. Of course, the questions were tough, but entirely fair.

Then PBS reporter Yamiche Alcindor tried — Trump interrupted her, too — to ask whether he emboldened white supremacists by declaring himself a nationalist. But the racist president chided her for “such a racist question.” Her question, too, was fair.

The man doesn’t seem to know — more likely, simply doesn’t care — that this is What Journalists Do. They ask questions, questions that are sometimes tough, pointed and skeptical. That’s how truth is learned. That’s how the people’s right to know is served.

As the quotes at the top attest, Trump is hardly the first chief executive to disdain reporters. But the vast majority of his predecessors nevertheless endured journalistic scrutiny with the understanding, as George W. Bush once put it, that news media are “indispensable to democracy.”

“I mean, power can be very addictive and it can be corrosive,” Bush said, “and it’s important for the media to call to account people who abuse their power, whether it be here or elsewhere.”

But Trump is different. And perhaps that’s no surprise, given that he’s a con artist who has spent decades shucking, jiving, deflecting and blustering his way past every moment of accountability. The man with no answers naturally fears the man asking questions.

It’s telling that Sean Hannity of Fox “News” is Trump’s idea of a real journalist. We’re talking about the Trump sycophant who, with fellow Fox star Jeanine Pirro, actually campaigned with Trump, speaking at a Missouri rally on Monday and shattering journalistic norms like glass. Some will quibble that Hannity considers himself a talk show host and not a journalist — he’s actually called himself both — but that’s no excuse.

So long as Fox continues to identify — or, misidentify — itself as a news organization, neither its pundits nor its reporters have any business rallying with Trump or any other political figure. That’s a bright red ethical line, yet Hannity and Pirro stomped across it in muddy boots. Both should be on the unemployment line. Yet these two are what Trump thinks journalists should be: his cheering section.

Spokeswoman Sarah Huckabee Sanders tweeted after the news conference that Trump “believes in a free press.” But that’s a bodacious lie. Trump hates What Journalists Do. Nor is he alone in that.

But you know the only thing worse than a country where journalists ask questions?

A country where they don’t.