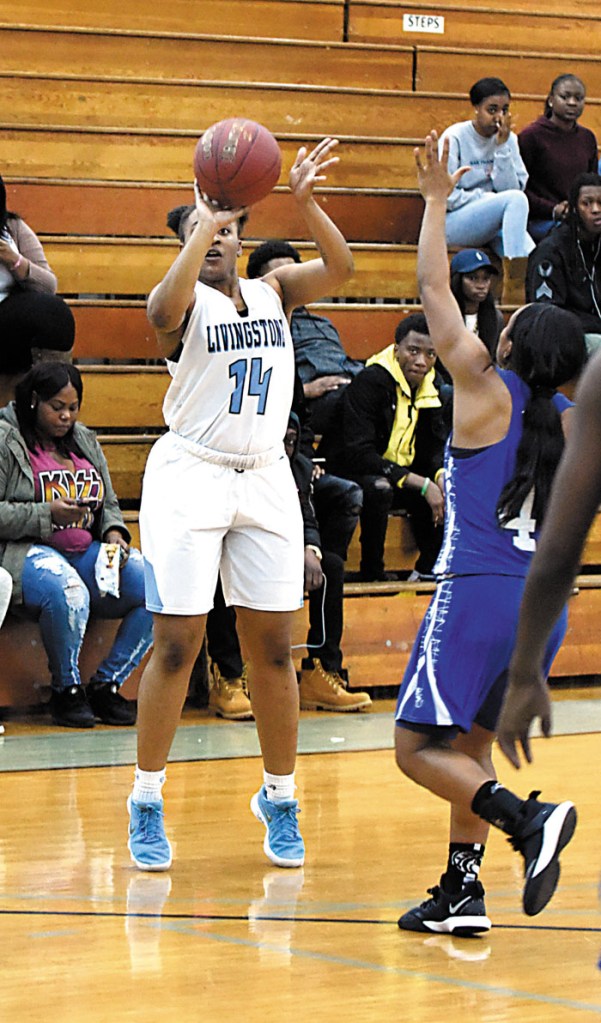 Livingstone’s Kyala Searcy shoots during a game against Fayetteville State on Feb. 10. Photo by Wayne Hinshaw, for the Salisbury Post.

SALISBURY — Livingstone finally has some stability in its women’s basketball roster and that has coach Tiffany Silver smiling.

During her first two seasons leading the Lady Blue Bears, Silver has seen those squads hurt by injuries and eligibility issues. That led to a 6-21 record last year, following a 14-13 mark during Silver’s first season at the helm.

“We’re very excited about our roster,” said Silver. “Out of 14 players, nine are returners … so the nine babies from last year that got beat up on, gained that experience. So, we’re definitely looking forward to seeing how much they’ve grown as people and players. They are in better position now with those big minutes that they got last year.”

Livingstone has its home opener on Wednesday against Morris College at 5:30 p.m. The Blue Bears lost their first two games of the season last weekend at West Virginia State, but Silver knows it make take some time for the chemistry to develop. Three of the five starters are newcomers, two quality transfers and a true freshman.

The transfer headliner is guard Daisa Harris, a complete player and scorer from Silver Spring, Md. She accomplished big things at Harford Community College. Harris has already made an impact, scoring 34 points in an exhibition win over Division I Winthrop on Nov. 1. She averaged 17 points per game in the two games in West Virginia.

“Daisa is a coach’s dream,” said Silver. “Her work ethic is second to none, she’s very coachable, is a great teammate and of course, she can put the ball into the basket. It feels good to have a kid like Daisa.”

A teammate from Harford, guard Darra Walker, has also transferred to Livingstone. Walker scored 23 points in each of the first two games thus far and another transfer, Adel Allen (NW Florida Community College), scored 15 and 16, respectively.

“Walker and Harris played together for a year, so both are coming from championship pedigree,” added Silver. “And Allen is another JUCO that ‘gets it.’ They are very big pick-ups and a there’s a lot of expectations on them from our coaching staff, as far as leadership goes, and production as well.”

The freshman starter is 6-foot post player Karemee Copeland, straight from T.C. Williams High School in Alexandria, Va. According to Silver, she has been a big enough surprise to become a starter, though she did struggle in West Virginia last weekend.

“We thought at first that we were going to go small, but Copeland has practiced her way into the starting lineup,” said Silver. “She proved us wrong about starting a smaller lineup.”

The newcomers are nice, but Silver also acknowledges that the team’s leader is, without a doubt, senior Kyala Searcy. From Winston-Salem, Searcy is a four-year player, beginning her career as a freshman under previous coach Anita Howard. A 5-10, gritty presence in the paint, Searcy can also step out and knock down jumpers.

Of players who were there for all 27 games last season, Searcy was the leading scorer at 14.6 points per game. She also grabbed six rebounds per game and was second on the team in assists and steals and played the most minutes (760). Searcy is averaging 12 points per game thus far this season.

“Kyala has been here four years and with our staff for three, so she means everything to this team,” said Silver. “She’s a senior, she’s hungry and ready to go.”

First off the bench are junior guard Asia Green and sophomore wing Taylor Perkins. The super-quick Green was a defensive force last season and chipped in with 9.6 points per game. Perkins, as a true freshman in 2017-18, averaged 11 points per game and earned a spot on the All-CIAA Rookie Team.

“Perkins has grown an inch and half since last year,” beamed Silver. “She is a legit 5-11 as a guard and we’re very excited for her and the contributions that she can make this season. And Green, she is this track star that has turned into a full-fledged basketball player. She does so much for us on both ends of the court. Green’s intangibles and ability to score will make it a very exciting year for her.”

Others returning that played a lot of minutes last year are guards Kedra Bradley and I’Keya Bland. Along with Searcy and Bradley, other seniors on the roster are post Jade Porter and guards Linda Galay and Zaria Pendergrass.

Sophomore Mia Terry, who played in 10 games last season, is back and will provide depth inside with her 5-11 frame. Monica Ezekiel, a 5-9 freshman from Bayelsa, Nigeria, rounds out the roster.

Ashley Sammons also returns as the top assistant coach for Silver. Joining the staff this season are Cierra York, a former outstanding player at Livingstone and Gary Richmond, a former high school coach in the Charlotte area.

“It’s great to have Ashley with me,” concluded Silver. “We’ve grown as a tandem, and her intensity is unmatched. We’ve also added some eyes and experience with Gary and Cierra.”

NOTES: At the West Virginia State tournament on Saturday and Sunday, the Blue Bears fell to the host Yellow Jackets, 102-95, and then to Glenville State, 128-99. … After Wednesday’s home opener with Morris, Livingstone travels to Lees-McRae on Saturday (2 p.m.).