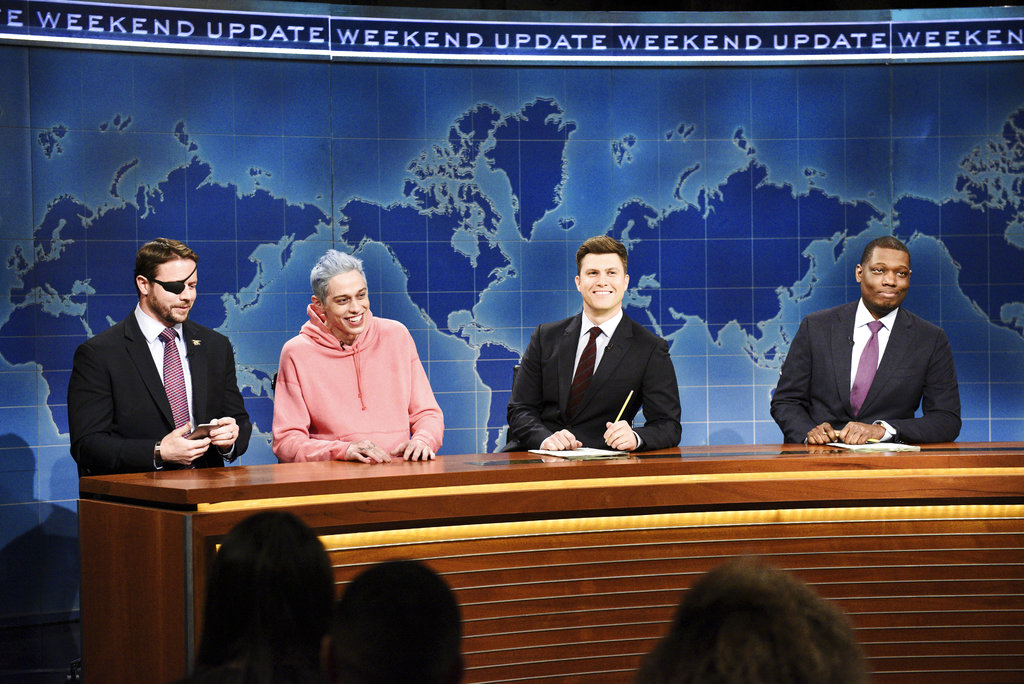 In this Nov. 10, 2018 photo provided by NBC, Lt. Com. Dan Crenshaw, from left, a congressman-elect from Texas, Pete Davidson, Anchor Colin Jost, and Anchor Michael Che appear during Saturday Night Live’s "Weekend Update" in New York. Davidson made his apologies to Crenshaw whose appearance he had mocked, saying Crenshaw “deserves all the respect in the world.” (Will Heath/NBC via AP)

“Saturday Night Live” comedian Pete Davidson got reamed for making a tasteless joke a week ago Saturday about Dan Crenshaw, a former Navy SEAL who lost his eye in combat in Afghanistan. Days later, Texans elected Crenshaw, a Republican, to Congress. On Saturday, Davidson apologized on the air to Crenshaw, who appeared on the show.

A week of feigned anger by the right and eye-rolling from the left was sadly symptomatic of the gaffe-take offense-defend with whataboutism-repeat pattern of our current politics.

This doesn’t mean public people – especially ones in power (and I don’t mean TV comics) – shouldn’t be held to account when they say something hurtful or wrong. However, if we are not witnessing, as is the case with President Donald Trump, an established pattern of bigotry or cruelty, maybe we can muffle the indignation industry just a tad. A stupid joke or an errant tweet is not the end of civilization as we know it. Our indignation should be reserved for hateful, violent actions and/or public figures who divide the country, fan racism and resentment, lie continually, act inhumanely and put partisan or personal advantage over country.

The mensch-like behavior of all concerned in the “SNL” debacle holds another lesson, as well. Trump critics who remain furious 24/7 with Trump’s tweets and outbursts perhaps can take solace in a phenomenon that becomes more vivid as Trump’s conduct deteriorates. Whether it’s a self-absorbed and mean comment about California in the midst of a natural disaster of enormous proportions, or missing a World War I commemoration ceremony in France, Trump is making himself look more petty, clueless and irrelevant by the day.

Californians will fight the fires; mature politicians will provide leadership and aid. European leaders displayed tremendous dignity at the Armistice Day remembrances. For two years, the United States – and the West more generally – will have to get by with an unfit U.S. president, one incapable of performing even the bare-minimum duties of the office. A true international crisis or economic disruption would test how well we can muddle along without a functional president.

The challenge today is in containing the danger Trump poses to our democratic norms and institutions, in keeping Western democracies safe and democratic and in finding other public figures to serve as role models for decent, kind behavior. I just never thought we’d get more examples of admirable conduct from “SNL” than the White House.

Kenneth L. Hardin: Women should not be defined by their hair