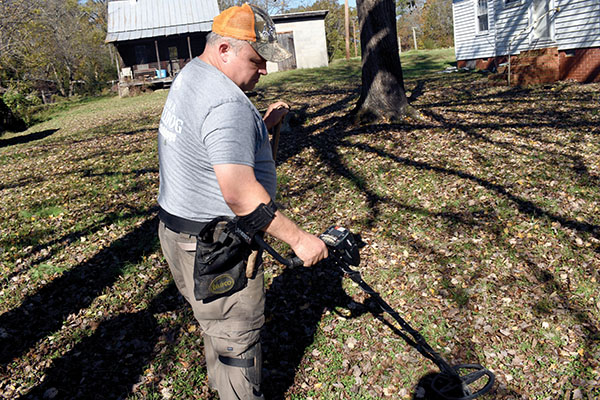 School Board member Travis Allen uses a metal detector to dig up the past. Here, he searches an area in Cleveland. Zach Stevenson / SALISBURY POST

SALISBURY — Travis Allen, a member of the Rowan-Salisbury Board of Education, is passionate about a number of things: his family, his role on the school board, his work in law enforcement and his newfound hobby — searching for treasure with a metal detector.

Allen is a history buff and purchased his detector in June. He has already amassed quite a collection of items from foraging. Belt buckles, harness bits, buttons, shards of pottery, a bedpost finial and a pewter spoon are just a few of his finds. One of his favorites is an ox knob. Knobs of this type would be fitted on an ox’s horns to keep it from goring other oxen.

He keeps his treasures in an old wooden dynamite box he found while searching . He liked it so well he asked the property owner if he could pay him for it. The owner was happy for him to have it.

On a sunny bright day with a perfect temperature, Allen visited a historic property in the western part of Rowan County. The property is listed on the National Register of Historic Places. The buildings were constructed in the early 19th century after the family patriarch came from Switzerland in 1777. He bought 600 to 700 acres for $138.

“That was a lot of money back then, but what a value it was,” Allen says.

The man’s descendants built three more homes on the land.

Allen has the owner’s permission to hunt for metal there. He has a strict code of conduct for metal hunting on others’ property.

• When he finds anything of value, he gives it to the owner.

• When he digs in the ground, he digs as indiscreetly as possible.

• If it’s a manicured lawn, he puts the dug-up soil on a tarp.

• He replaces his “plug” of land as perfectly as possible so no one can tell he’s been there.

One treasure Allen found was an intact 2-gallon jug. It was in perfect shape; not a crack or chip mars its surface. It is glazed in yellow with some blue near the bottom. A stenciled “2” on the face indicates its capacity. A cork still plugs the top.

Another valuable find was an old sterling silver ring with a ruby intact. He found it on a property off Cool Springs Road and gave it to the property owner.

“’One man’s junk is another man’s treasure’ – isn’t that how it goes?”

A favorite place to search on a homestead is a spreading tree near the house – a likely place the family gathered to rest, shuck corn or shell peas before air conditioning came along. At an oak tree on the property he recently visited, he found many buttons and coins. He has some interesting brass buttons with the word “jackrabbit” inscribed on them. He’s not yet learned how these buttons were used.

One of Allen’s prizes is a colonial dandy button. These buttons date to 1770 to 1800 and are as big as a half-dollar. A “dandy” was someone who dressed well. Someone who wore a brass dandy button was finely dressed.

“When you find something, your imagination gets active,” Allen said. “I imagine he got home and his wife said, ‘What? You lost a button?’”

“With a day like today, what better is there to do?” he asks. “You’re in nature, you’re walking – I’ve already lost 20 pounds, by the way – and you find cool stuff.”

Oftentimes, Allen’s son Wesley accompanies him. Wesley is a fifth-grader at Mount Ulla Elementary School. Allen treasures the time with him.

“He’s a good digger,” he says. “I’ll find it and he’ll dig the hole. Then again, he might get bored and go play in the woods. I just tell him don’t go so far you can’t see me and you’re fine.”

Glass bottles have been added to the growing stock of treasures. One is a dark blue milk of magnesia bottle. Another has raised lettering: “Grover’s Tasteless Chill Medicine, prepared by Paris Medicine Company, St. Louis.”

Allen laughs. “Today we say, ‘Take a chill pill,’ – well, they took Chill Medicine back then.”

Allen waved his arm and said: “Just look around – do you realize how the railroad changed this place?”

There doesn’t seem to be a railroad for miles.

He proceeds. “In 1812, they built a simple house. It’s not big, but it’s a decent house for the family. They farmed for survival.”

“Ah!” he says, holding up his pointer finger. “The railroad arrives and suddenly they have a market. They can farm for profit. Suddenly in 1850, they have a house and four or five barns. If you had three barns in 1850, you were doing really well. And the railroad did that.”

He sort of makes you wish he’d been your history teacher in school. He makes the simplest fact vivid and interesting.

Allen hopes to organize an expedition of high school history students to excavate on old home foundation he knows of in the woods.

The family who owns the land tells of Union soldiers who took the farm animals. When Allen found a Union button on the land, it gave the legend some credibility.

Turning on his metal detector, he waves it over the ground. Numbers on the handle indicate the likelihood of metal below ground. The machine squeals, but the number is only 40. The squeal gets louder in another location, and the number jumps to the high 80s. Allen decides this is where he will dig. He takes a little shovel and makes four precise cuts in the ground at right angles to each other: a box. “See? I’m just taking a plug from the ground. In a well-sod yard, I can replace it and you could never tell I’d been there.”

He pulls the 5-inch square of ground away. He pulls a tool that looks like a wooden carrot from his holster. It’s called a pointer, and he can wave it over his plug of earth or over the hole to see if he has dug up the metal item yet.

The pointer squeals at the plug so Allen deconstructs the chunk of dirt and finds the treasure. It’s an old iron bolt, covered in rust, an inch and a half in diameter. Not a valuable find.

“We find these, and we find a lot of old horse shoes. I guess that’s the equivalent of old tires today.”

He scoops the dirt back in the hole and replaces the plug of grass on top.

His goal is to find a U.S. “Large Cent” — an old Lady Liberty penny about the size of a quarter. The government made them so that each penny was actually a penny worth of copper.

“I’m new at this,” he says. “Most guys probably have one already.”

Allen is happy on a sunny day to be outside, detecting for metal and imagining the old days.