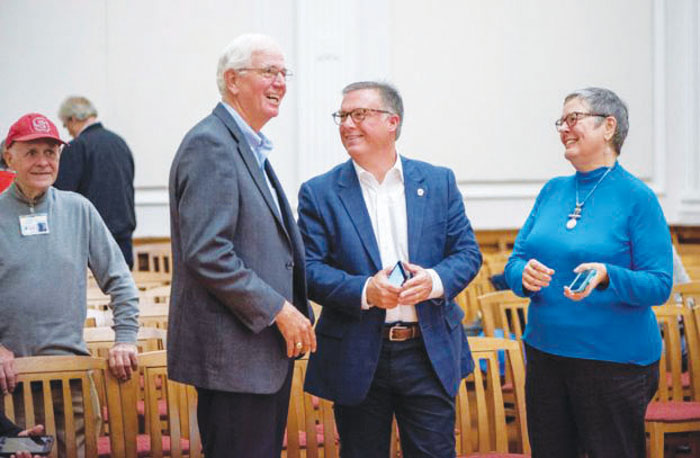 1. The family of Camara Talbert, who died in January 2017 and was buried in City Memorial Park, watched as her gravesite was excavated and her casket reburied in another part of the cemetery. Why were her remains relocated?
A. The roots of a giant oak tree in the park had reached Talbert’s grave and caused her monument to break.
B. A city water line broke, causing a foot stone to sink all the way to the burial vault.
C. A new road in the cemetery is designed to go through that cemetery plot.
D. The city wants to install a carillon for the cemetery on that spot.

2. All systems are go for the ‘Tis the Season Spectacular parade in Spencer and Salisbury on Nov. 21. Which of the following statements is not true about the parade?
A. All six high school bands in the Rowan-Salisbury system will perform.
B. Nancy Stanback will be grand marshal.
C. Clay Aiken will sing from one of the floats.
D. There will be no judging of bands, floats or anything else.

3. Republican Carl Ford won election Tuesday in Senate District 33, which takes in Rowan and Stanly counties. Ford will be giving up his seat in the N.C. House, which he held for how many terms?
A. Three
B. Six
C. Nine
D. 12

5. Among candidates for the Rowan County Board of Commissioners, who was the leading vote-getter Tuesday?
A. Greg Edds
B. Jim Greene
C. Judy Klusman
D. Veleria Levy

6. This year’s 65th edition of the Salisbury Antiques and Arts Show is dedicated to one of its biggest supporters and hardest working volunteers through the years. Who?
A. The late Lib Taylor
B. The late Ernest Hardin
C. Betsy Cunningham
D. Terry Holt

8. In a post-Halloween arrest related to trick-or-treating in Grace Ridge subdivision, authorities charged an 11-year-old in juvenile court with distributing food (candy bars) that contained foreign objects. What did authorities say was in the Halloween candy?
A. Rocks
B. Paper clips
C. Tylenol
D. Straight pins