On Nov. 17, Faithful Friends Animal Sanctuary is hosting an open house of two historic homes with one family connection — and you’re invited. 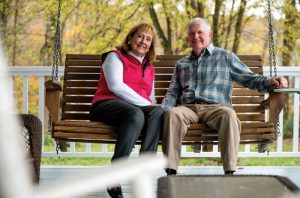 Both houses are located on Kern Carlton Road. One is The Peter Kern House, known as “The Brick House,” Rowan County’s first brick dwelling. The other is The Farm on High Rock Lake, formerly Carolina Lily, also known as the Kern-Carlton House.

The latter was the homeplace of Meetta Carlton Lampert, who moved there at age 8.

For the past three years, the home — which includes two guest cottages — has been owned by Jay Horne and Rob Kent, former estate managers from south Florida.

“As far as we’re concerned,” Horne told Lampert during a recent visit, “this is your house.”

“I love it that it’s y’all’s house now,” Lampert said.

Horne and Kent chose the farm because they wanted to be closer to their adult daughters Jacquie and Alexandra Horne, who live in Charlotte. But they also wanted a home that had guest cottages, which is how they found the property. And fell in love with it immediately.

“As soon as we drove into the driveway, I told Rob, ‘We’re buying this,’” Horne says.

Guests can peek in on both guest houses, both of which have two bedrooms and one bathroom. In the main guest house — the other is currently being rented — visitors will note a Victorian-style bedroom with a “brass and glass bed” Horne refinished, as well as an old-fashioned wash stand. The other bedroom is known as the Florida room with its four-poster, British Colonial-style bed, accented by lamps with monkey bases, and monkey paintings done by Horne.

That tropical theme carries over to the main house, which Horne and Kent repainted in light tones. Kent made window treatments throughout and reupholstered and repurposed much of the furniture as well.

The downstairs includes a kitchen, sitting room, dining room, living room and den. The kitchen windows on the back — as well as the master bath upstairs — look out onto extensive gardens on the 10-acre property.

Upstairs are three bedrooms, a dressing room, and a sewing room in addition to the master bath and guest bath. Alex Horne’s favorite color is purple, so look for the purple Christmas tree in her room.

When Horne and Kent hosted a housewarming party, they met neighbor Nancy Krapf, president of the Faithful Friends board. When she asked them to host the open house on behalf of the organization, they didn’t hesitate.

Neither did Jim and Kathy Carlton, who have restored the Peter Kern House just down the road. Krapf says that shuttles will run between the two locations, if you prefer not to walk.

The Carltons have meticulously restored the Federal-style home, and often come down in the evenings to watch the sun set and the deer come out.

Between 1995 and 2010, several attempts to restore the home “bombed out,” Carlton says. His great-great-grandfather built the house in 1820, and he could not resist buying it when the opportunity arose in 2012.

The Carltons generously open the house to family members. The Carlton and Murdoch family reunions both take place here each year.

During one set of renovations, the 1920 addition which housed a kitchen, breakfast room and upstairs sleeping porch had been torn off. The Carltons built a downstairs addition which includes a modern kitchen and bathroom. Carlton found the kitchen sink out in the woods, a remnant of the original addition.

Carlton grew up in the home, one of six sons of Pritchard and Della Carlton, who also had two daughters. Carlton and his brothers shared a large, upstairs bedroom, with the girls in the other bedroom. A large hall takes up the rest of the second floor, and the Carltons put in a bathroom at the end, again to improve the house’s functionality.

Downstairs, visitors enter the home through the large side hall — a mark of Federal-style architecture. The parlor and dining room comprise the other two rooms of The Brick House’s original footprint. (When the Carltons lived in the home, the dining room was his parents’ bedroom.)

The winding staircase in the foyer is the same design as the foyer at The Hermitage, the home of President Andrew Jackson. Two items of interest in the downstairs side hall are the desk of Carlton’s great-grandfather, Francis Murdoch, the longest serving rector at St. Luke’s Episcopal Church. At 16, Murdoch lied about his age to join the Confederate Army, and a portrait of him in uniform sits atop the desk.

A safe that once sat in his father’s law office now sits beside the front door.

The downstairs has 12-foot ceilings, and Carlton notes that the he and his brothers once played basketball here. They also slid down the banister many times over.

Mid-week before the open house, the Carltons will decorate their home with running cedar, mistletoe and holly found on the property. Carlton is also procuring a 12-foot cedar Christmas tree, which he admits are getting harder and harder to find.

Like Horne and Kent, the Carltons couldn’t tell Knapf no when she asked them to host the open house. Both couples will offer refreshments to guests.

“An organization like Faithful Friends can’t be anything but good,” Carlton says.

Krapf says that with a new building, folks may think Faithful Friends no longer needs funds. They would be wrong, she says. It costs $10 a day to board a healthy dog or cat, but most animals that come into the no-kill shelter needs veterinary attention, medicine or a special diet.

“We make a lifetime commitment to an animal,” Krapf says.

The Faithful Friends Holiday Open House is set for 2-8 p.m. Saturday, Nov. 17. Tickets at $10 each are available at Critters and the Stitchin’ Post in Downtown Salisbury, Roger Dogs and Bernhardt Jewelers in Spencer, and at the door.

Weather has wreaked havoc at park