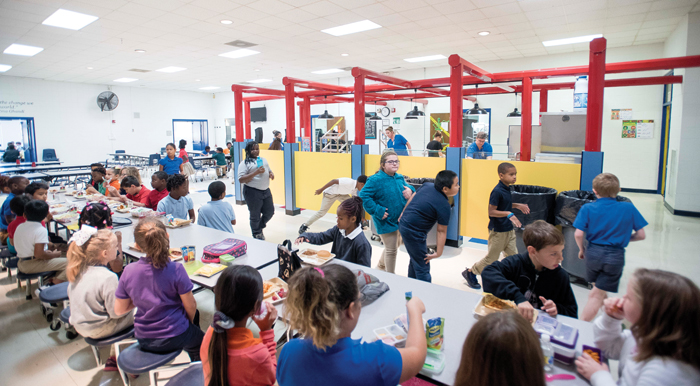 JON C. LAKEY / SALISBURY POST The cafeteria at Isenberg Elementary school is a busy place between 10 am and noon as students take a break from class and eat a meal.

It’s a correlation that’s been confirmed in study after study, and by organizations such as the National Center for Education Statistics. And the link is just as present in Rowan County as it is elsewhere.

The Post used district free and reduced-price lunch rates — a common estimate of student poverty level — to make these comparisons.

However, those percentages are still higher than national and state averages. According to the National Center for Education Statistics’ most recent survey, in 2015 51.8 percent of students in the United States qualified for free and reduced-price lunch. In North Carolina, the rate was 57.2 percent.

By 2017, that number jumped to 59.8 percent, according to the North Carolina Department of Public Instruction. But countywide, more than 65 percent of students qualify for free and reduced-price lunch, a number district administrators say is climbing daily.

So why do schools with a high number of students living in poverty tend to have lower test scores? A lot of it, said district accountability director Alesia Burnette, comes down to experience.

“(A test) may ask a student a question about the beach, but if a student has never been to the beach, they don’t have a frame of reference for that,” Burnette said.

“A lot of our kids aren’t bad kids. They’re not kids that can’t learn. A lot of times, they’re underexposed,” Moore said.

While test development teams try to anticipate these pitfalls, they don’t catch all of them. And the tests themselves are only growing in difficulty. Simple math problems are turned into word problems, which can exponentially increase the difficulty for students who are already struggling.

According to the Rowan County Department of Social Services, 17.3 percent of the county’s 139,933 residents lived below the federal poverty level in 2015. In June 2017, the unemployment rate in the county was 4.3 percent.

A 1995 study by Betty Hart and Todd Risley — and its 2017 replication by another group of scientists published in the American Journal of Speech-Language Pathology — indicated that students coming from situations of poverty often lack access to books and may have a less developed vocabulary than their more affluent peers upon entering kindergarten.

That can immediately put a child at a disadvantage in the classroom. By the time testing begins in third grade, it’s estimated that children coming from economically disadvantaged homes will have heard several million words fewer than their peers.

That’s where education comes in. A good teacher can help students catch up by leaps and bounds.

“Our most effective teachers try to fill in those gaps for students so they’re not hampered by a certain area,” Burnette said.

A teacher may work with students one-on-one with guided reading or may use field trips to supplement limited experiences and help children connect with the world and with learning.

“Instruction, a lot of times, in my opinion, will cure a lot of those ills,” Moore said. “And it’s not just about just reading and writing. It’s about how can you make that an engaging situation for kids.”

Isenberg has received a D rating since 2014, and more than 92 percent of its students qualify for free and reduced-price lunch. But the school has met growth expectations for the past three years.

At Isenberg, teachers use creative classroom set-ups, robotics and art and even buy ukuleles to help engage students and teach them at the same time. For Moore and the staff at Isenberg, cut-and-dry lessons, worksheets and boredom won’t cut it.

“A lot of kids learn because of, not in spite of,” he said.

‘We need to play the game’

Unfortunately, even though a student may show incredible growth within a single year, if he is not caught up to his grade level by the time test season rolls around, both student and school can suffer. School performance grades are calculated using a formula of 80 percent student proficiency and 20 percent student growth. It’s a ratio that local educators want to flip, if not scrap altogether.

“I really struggle with this, because I know what I put into this school and I know how my kids feel when they’re at school. And I know how my teachers are pouring things in at our school,” Moore said. “It really hurts me that my letter score is 80 proficiency and 20 percent growth. …The question is, how can we get to proficiency? And I don’t know if that’s ever possible with the way this is set up.”

It would be better if standardized tests were entirely based on growth or on mastery of a subject. But at the moment, test scores, Moore said, “are normed,” meaning they don’t take into account the numerous variables that can affect a child and his ability to learn. The tests don’t factor in community support or lack of it; they don’t adjust for poverty, mental health issues or single-parent homes.

However, that doesn’t mean testing and test scores can be dismissed. They carry a lot of weight in certain circles — and the data gathered is useful to school districts and teachers.

“If we’re being judged on this score right now, then we need to play the game like the score matters,” Moore said.

However, he and his teachers try to take it with a grain of salt and work hard to help students learn and grow.

The issue is also far more complicated than just equating poverty to low test scores. According to Burnette, it’s important to acknowledge the effect that family life and parenting play in a child’s learning. Parents who are struggling financially aren’t bad parents who don’t care about their child’s education — though they may be strapped for time.

“Sometimes sitting down and reading a book feels like a luxury, and yet those are critical things,” she said.

Moore agreed. Isenberg has phenomenal parents who are extremely involved in their children’s lives and education, despite their financial situation, he said. But sometimes, there’s only so much that can be done.

Children are increasingly dealing with more difficult issues at home or outside school. They experience violence in their community or in their home; are exposed to drug abuse; or must push past the difficulty of divorce or the grief of losing a family member.

“Poverty is only one factor. Poverty in and of itself is not going to be the only contributing factor to low test scores,” said Donna Fayko, executive director of the Rowan County Department of Social Services.

A child may grow up in a home with no books or no internet access because of poverty, but that, Fayko said, is remediable. What’s more difficult to correct are the mental and emotional strains that chronic or severe poverty or other events can place on a child.

“Chronic poverty is a form of trauma,” Fayko said. “And we do know that trauma does affect a child’s ability to focus and attend.”

Chronic poverty also counts as an Adverse Childhood Experience, or ACE. High ACE scores have been linked to lower academic achievement, impaired behavior, increased impulsivity and, later on, with substance abuse and even cardiovascular disease. According to Fayko, roughly 8,000 Rowan County children have experienced two or more adverse childhood experiences. That’s nearly half of the nearly 19,000 students in local public schools.

And ACEs encompass much more than socio-economic status.

“You can’t just say it’s poverty alone; you have to look at the other extenuating factors,” Fayko said.

For example, between 2017 and 2018, the number of Rowan County children referred to foster care because of substance abuse in the home jumped from 6.36 percent to 27.84 percent — or from about 35 children to more than 100.

“That should scare the bejeezus out of everyone of us living in Rowan County,” Fayko said.

Fayko said she’s seen a trend of children in foster care falling behind in the classroom.

Lisa Berger, social work program administrator with DSS, said academics suffer when children live in a home where domestic violence or some type of abuse is occurring. Often, this will be heralded by in increase in tardiness or absenteeism or by a lack of concentration.

“A child may not want to go to school because they don’t want to leave the home. They take on the role of being the protector in the home,” Berger said. “They feel like they can prevent the other caretaker in the home from assaulting their parent.”

Lift the weight on students’ shoulders

Education can also fall by the wayside in a home where substance abuse is occurring. Such an environment can have increased traffic, which can result in a lack of sleep for children, a feeling of being unsafe and an increased risk of sexual assault.

“Sometimes what happens in the morning before (children) get to school will bring you to tears,” Moore said.

It’s something he’s seen every day as students trudge into school or get out of cars with tear tracks on their faces. While he and his staff can’t do anything about what happened to students before they got to school, they can help make children look forward to coming to Isenberg.

“School should be something very different for kids. It shouldn’t be like home. When kids come in, they should want to be here,” he said.

Moore and teachers at Isenberg have taken proactive steps to lift what weight they can from students’ shoulders.

“The first thing you’ve got to be is real. … If (students) are coming from tough situations, like ours are, you’ve got to see it as what it is,” Moore said.

In addition to addressing the problem — behavior, tardiness, absenteeism, etc. — Isenberg provides numerous supports around the child, the family or the issue. The school provides free breakfast and lunch for every student thanks to a Community Eligibility Program grant. The office has a clothes closet. Moore will often drive students home if a parent can’t find transportation to pick them up. And Moore works hard to bring in community groups like Man Up Monday and Communities in Schools.

“I can’t just do it with my two hands alone. I need other hands,” he said. “… Because the deficits our kids are coming in with are not deficits they create themselves. … A kid needs your help, and then when people actually come to help, I need to have something very meaningful that they can do that can address the problem.”

For Moore, each and every action needs to be geared toward addressing those deficits. It’s a strategic, data-driven, community-minded way of thinking that leads everything at Isenberg.

“It’s not impossible,” he said of correcting deficits, “but you have to be very intentional about what you’re doing.”

Bit by bit, it’s having an effect. Isenberg may not have the highest school performance grade in the district, but its students are meeting growth. And Moore knows his teachers are doing good work.

Fayko and Berger said there are actions the public can take to help improve academics — and quality of life, in general. Rowan County has a lack of cheap or free things for children and families to do on weekends or in the evenings, and there’s a lack of transportation and resources for families who are struggling financially. These things seem worlds away from tests and academics, but Berger said they can have an impact — even if it’s just peace of mind. That’s something that can go a long way for a family under stress.

They still have to play the game, but educators, organizations and others agree that test scores ultimately take a back seat.

“The scores are the scores. But my thing is, how are kids going to feel when they leave this school?” Moore said. “And my job is to make sure they’re ready to go to the next one. … My goal is to provide the best possible elementary school experience to every kid in our school.”