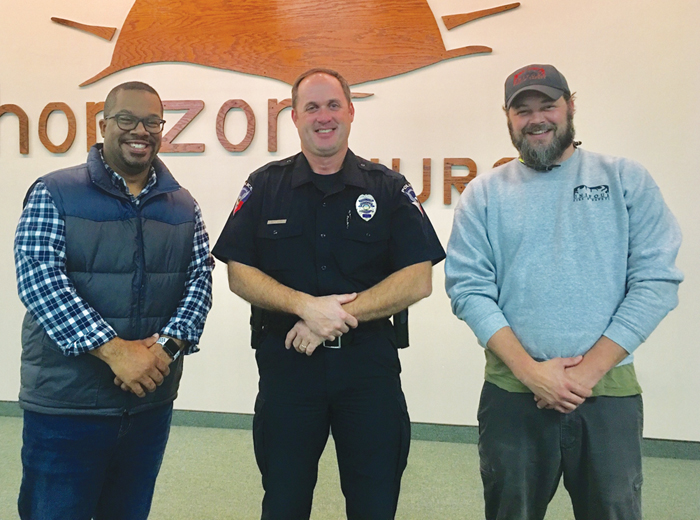 Brown and Fisher Families gatherfor 94th annual reunion
GRANITE QUARRY — The Brown and Fisher families gathered for their 94th annual reunion on Oct. 15, 2018, one month later than originally planned as a result of Hurricane Florence. Approximately 60 descendants and their kin attended.
Having been separate organizations previously, the two families joined together to form one association in 1925 due to the numerous marriages between the two families. The Association includes descendants of German immigrants who migrated to Rowan and Cabarrus counties from Philadelphia, Pa.
Original ancestors were: brothers Abraham, Andrew, Jacob and Michael Braun and Frederick, George Jr., and Sybilla Fisher.
Rowan County’s Michael Braun is best known for his 1766 Old Stone house, now known simply as the Michael Braun House, which, after more than 50 years of repairs and restorations, stands as one of the oldest surviving residences in Western North Carolina.
Cabarrus County’s Bachman Brown was known for serving several terms as Mayor of Kannapolis. Perhaps the most famous descendant is former Indiana Senator Richard “Dick” Lugar, who served as Mayor of Indianapolis and as Indiana Senator 1977-2013.
The reunion was held on the grounds of the Michael Braun House, now owned and operated by Rowan Museum Inc. BFA President Stephen W. Brown of Durham opened the meeting by remembering Juanita Fisher Lagg of Salisbury who passed away earlier this year at the age of 92. Mrs. Lagg had served as BFA coordinator for more than 30 years. He also recognized Pat Beck, also of Salisbury, who resigned from her position as secretary after 18 years of service.
The Association has established a website, www.brownfisher.weebly.com
Newly appointed coordinator Doug Robinson reported a total of 401 members.
President Brown told the group about Rowan Museum’s plans for enhancement of the Michael Braun House and grounds. After upcoming removal of the 1960s caretaker’s house, the Museum seeks to expand their storytelling capabilities by adding a cabin, donated by the family of the late NC Rep. Eugene and Jean Fisher McCombs, to the site which will be used to reenact the lives of Michael Braun’s 18 slaves.
Additionally, Mrs. Lagg and her late husband Elmer left a gracious gift to the Museum which will be used as a challenge to raise funds for a family center to be built on the hill above the house. The building as conceived will contain a family archives room, a kitchen, an office/gift shop and an events area along with other necessities. In addition, the building will be surrounded by a canopy overhang which will serve as a stage for the natural amphitheater created by the slope down to the house. At other times the canopy will serve as a picnic area for guests.
President Brown recognized 82-year-old and charter life member Becky Burrows as the oldest person attending. Two-year-old Skylar Menster was the youngest person attending. Board of directors vice president Deane Brown of Spartanburg, S.C. travelled the farthest.
Treasurer Larry Brown and Becky Burrows tied as the descendants with the most family members present with seven each.
Youth attending included: Gavin Boyle, Layla Boyle, Berkley Brown, Brooks Brown, Cole Brown, Samantha Menster, Skylar Menster, Eli McCoy, Danelle Ribelin, Brianna Hunt, Greyson Hunt, Lacie Hunt, Bryson Walker, and Keely Walker.
The following members were approved as board members whose four-year terms begin 2018 and expire 2022: Candace Elliott Brown of China Grove, Hunter Alexander Fisher and Linda Shelton of Salisbury and Keith Wolf of Albemarle.
The following were approved as officers whose two-year terms begin 2018 and expire 2020: Stephen W. Brown of Durham, president; Deane Brown of Spartanburg, vice president; Paul Bryan Walker of Concord, secretary.
As in the recent past, the reunion was held in conjunction with Germanfest, also held on the grounds of the Michael Braun House, whose attendance topped 3,000 last year. Germanfest included making of traditional 1700s German crafts, reenactors such as an apothecary, a beekeeper, etc., and serving German foods such as bratwurst and beer provided by New Sarum Brewery of Salisbury.
The 2019 event will be held on Saturday, Sept. 21.