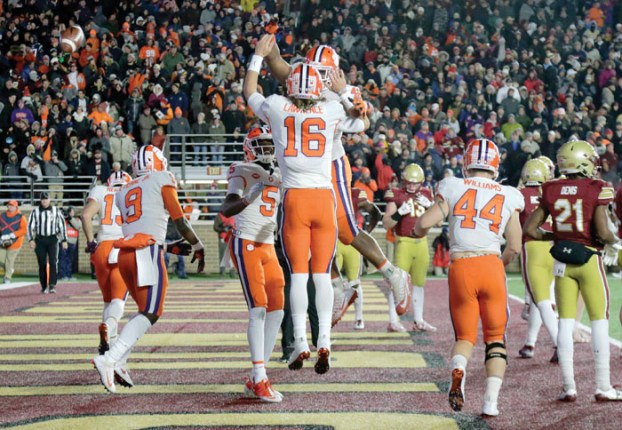 Clemson quarterback Trevor Lawrence (16) celebrates his touchdown run with teammates during the second half of an NCAA college football game against Boston College, Saturday, Nov. 10, 2018, in Boston. (AP Photo/Elise Amendola)

BOSTON (AP) — Trevor Lawrence threw a touchdown pass and ran for a score and Clemson knocked Boston College quarterback Anthony Brown out of the game early and won, 27-7.

The battle for first-place in the ACC Atlantic Division was not much of a fight. The Tigers (10-0, 7-0, No. 2 CFP) wrapped up a fourth straight trip to the Atlantic Coast Conference title game as division champions and kept rolling toward another trip to the College Football Playoff.

Boston College (7-3, 4-2) lost Brown on its first possession when the sophomore got off a third-and-9 pass, but was thrown to the turf by star defensive tackle Christian Wilkins. Trainers attended to Brown on the field and he walked to the sideline on his own. He wasn’t there long before heading to the locker room. In the second quarter, it was announced he would not return.

NORMAN, Okla. (AP) — Kyler Murray passed for 349 yards and ran for 66 and No. 6 Oklahoma survived a late two-point conversion attempt to beat Oklahoma State 48-47 on Saturday.

Taylor Cornelius connected with Tylan Wallace on a 24-yard TD pass to cut Oklahoma’s lead to one with 1:03 to play. Oklahoma State went for two, but Cornelius threw short and into coverage, and the pass fell incomplete. Oklahoma (9-1, 6-1 Big 12, No. 6 CFP) recovered the onside kick and ran out the clock.

Kennedy Brooks ran for 165 yards and three touchdowns, Trey Sermon ran for 120 yards and two scores and Marquise Brown caught eight passes for 142 yards and a score for the Sooners.

Cornelius passed for a career-high 501 yards and three touchdowns for the Cowboys (5-5, 2-5). Wallace caught 10 passes for 220 yards and two scores. Chuba Hubbard ran for 104 yards and three scores, but he lost a critical fumble in the fourth quarter.

Brooks had a 5-yard touchdown on the last play of the third quarter to give Oklahoma a 41-35 lead. Hubbard scored with 12:20 to play, but Matt Ammendola missed the extra point, leaving it tied at 41.

With Oklahoma State driving for the lead, Hubbard fumbled, and Oklahoma’s Kenneth Murray recovered with 6:09 to play. Oklahoma took advantage when Trey Sermon powered in from the 1 with 3:29 left.

TUSCALOOSA, Ala. (AP) — Josh Jacobs ran for a touchdown and caught a scoring pass and Alabama had its second straight shutout.

The offense raced to a fast start but mostly stalled from there against the Bulldogs (6-4, 2-4) and the nation’s No. 2 scoring defense.

Tagovailoa started the fourth quarter on a stationary bike after getting his right knee checked out in the medical tent following a hard hit. He didn’t return and wasn’t needed.

Fresh from a 29-0 victory over No. 9 LSU, the Tide defense hasn’t allowed a point in nine-plus quarters. Alabama had five sacks and Mississippi State had four in a rough day for both quarterbacks.

With the temperature at 27 degrees — the third-coldest game at Notre Dame Stadium since the 1980 season — the Irish (10-0, No. 3 CFP) wore green jerseys for the fourth time in Brian Kelly’s nine-year tenure at Notre Dame to honor their seniors.

Wimbush, who led the Irish to their first three victories, got the start in place of injured junior Ian Book, who suffered a rib injury last week against Northwestern.

The Wolverines (9-1, 7-0 Big Ten, No. 4 CFP) have won nine straight and remain in first place in the conference’s East Division. They have a final tuneup against Indiana next week at the Big House before closing the regular season at No. 8 Ohio State.

ATHENS, Ga. (AP) — Georgia struck for a pair of touchdowns late in the first half to take control and D’Andre Swift finished off Auburn with a 77-yard scoring run early in the fourth quarter.

Swift rushed for 186 yards to power another big game by Georgia’s running attack, which finished with 303 yards. Having already locked up a spot in the Southeastern Conference championship game, the Bulldogs (9-1, 7-1, No. 5 CFP) couldn’t afford to slip up against the Tigers.

The Bulldogs trailed 10-6 with the first half winding down. But, facing third-and-4 from the Auburn 14 and the prospect of bringing on kicker Rodrigo Blankenship for the third time, Jake Fromm connected on a TD pass to Tyler Simmons that pushed the home team ahead with 2:47 remaining.

Auburn (6-4, 3-4, No. 24 CFP) went three-and-out, taking only 47 seconds off the clock, and Georgia got a chance to add to its lead. Swift broke off a 24-yard run before two short completions left the Bulldogs facing fourth-and-3 at the Tigers 38.

On the fourth of those possessions, the Spartans had to punt from their own end zone. They took a safety that appeared intentional, giving Ohio State a 9-6 lead. The ensuing free kick went out of bounds, giving the Buckeyes the ball at the 50, and then Chrisman pinned Michigan State back again.

Ohio State capitalized on that punt when a shotgun snap by Michigan State hit the man in motion. Dre’Mont Jones recovered the fumble in the end zone, giving Ohio State a 16-6 advantage.

FAYETTEVILLE, Ark. (AP) — Joe Burrow was 15 of 21 for 195 yards and a touchdown and the LSU defense dominated Arkansas.

The win comes a week after LSU (8-2, 5-2 Southeastern Conference) was shut out in a loss to No. 1 Alabama, and it improves coach Ed Orgeron to 8-0 in games following a loss. The Tigers haven’t lost back-to-back games since dropping three straight in 2015.

Justin Jefferson had six catches for 117 yards, including a 40-yard touchdown for the game’s first score. The Razorbacks (2-8, 0-6) managed a season-low 216 yards of total offense — including only 16 yards on the ground — while losing their ninth straight SEC game dating to last season.

The Cougars (9-1, 6-1 Pac-12, No. 8 CFP) won their sixth straight, but it wasn’t as easy as expected against the Buffaloes (5-5, 2-5), who lost their fifth straight despite the return of star receiver Laviska Shenault Jr.

Shenault was rusty in his return from a right turf toe injury. He caught 10 passes for 102 yards but cost his team dearly with back-to-back drops and a lost fumble in the second half.

Milton completed 17 of 21 passes without an interception, and the Knights (9-0, 6-0 American Athletic Conference, No. 12 CFP) remained one of four unbeaten teams in the Football Bowl Subdivision, along with Alabama, Clemson and Notre Dame. UCF stayed atop the AAC East Division standings and on course to be part of the discussion about which teams are worthy of berths in the College Football Playoff.

KNOXVILLE, Tenn. (AP) — Jarrett Guarantano threw a 39-yard touchdown pass to Marquez Callaway on the final play of the first half and Darrell Taylor had four sacks for Tennessee.

Guarantano was 12 of 20 for 197 yards, including a 2-yard touchdown pass to Dominick Wood-Anderson that extended Tennessee’s advantage to 24-0 in the third quarter.

Love’s 491 passing yards were the third-highest single game total for a Utah State quarterback. Darwin Thompson had 140 yards and a touchdown on 15 carries along with 115 yards and a pair of scores on four receptions for the Aggies (9-1, 6-0 Mountain West). They became the 17th team in NCAA history to gain at least 800 total yards in a game. The 804 yards and 33 first downs were both school records.

Josh Love threw for 210 yards and a touchdown for Jose State (1-9, 1-5). Tre Walker added a career-high 209 yards and two touchdowns on seven catches.

The Longhorns (7-3, 5-2 Big 12) snapped a two-game skid that had cost them the Big 12 lead. They stayed a game behind co-leaders No. 6 Oklahoma and No. 7 West Virginia with two games left to determine who plays in the conference championship game Dec. 1. Next up for the Longhorns is No. 23 Iowa State, the team they are tied with for third place.

Ehlinger completed 22 of 34 passes for 312 yards and four touchdowns and broke the Big 12 record for most consecutive passes without an interception. He extended his streak of passes without a pick to 280, breaking the mark of 273 set by former West Virginia quarterback Geno Smith.

Franks dived across the goal line on a fourth-down play from inside the 1 with 4:09 to play, putting the Gators (7-3, 5-3 Southeastern Conference, No. 15 CFP) ahead for the first time. Florida overcame a 17-point deficit in the second half to beat the Gamecocks (5-4, 4-4).

STATE COLLEGE, Pa. (AP) — Trace McSorley tied the Penn State record for victories by a quarterback with 29, leading the Nittany Lions past Wisconsin.

Miles Sanders ran for 159 yards and a touchdown on 23 carries, and McSorley completed 19 of 25 passes for 160 yards and a TD while matching Todd Blackledge’s victory total from 1980-82.

DeAndre Thompkins caught a touchdown pass for Penn State (7-3, 4-3 Big Ten, No. 20 CFP). The Nittany Lions held the Badgers (6-4, 4-3) to 125 yards in the second half and sacked backup quarterback Jack Coan five times. Jonathan Taylor ran 20 times for 185 yards and a touchdown for Wisconsin.

AMES, Iowa (AP) — Brock Purdy threw for a touchdown and ran for another score, and Iowa State topped Baylor after a skirmish in the third quarter.

Iowa State star David Montgomery and Baylor linebacker Greg Roberts were ejected after throwing punches at each other early in the third quarter. The Cyclones and Bears (5-5, 3-4) nearly came to blows when a previous play ended up spilling over onto Iowa State’s bench. The bad blood hung around, and the teams nearly staged a full-on brawl that saw Roberts slap Montgomery on the helmet, prompting Montgomery to swing back.

CINCINNATI (AP) — Michael Warren II ran for three touchdowns and caught a pass for another score Saturday night, keeping Cincinnati in the chase for the American Athletic title.

Warren had a 13-yard touchdown catch in the first half. He ran for three touchdowns in the third quarter, including a 57-yarder, and set a school record with his 18th TD of the season. Warren has scored in all but one game this season. South Florida (7-4, 3-3) has lost three straight conference games for the first time since 2013.