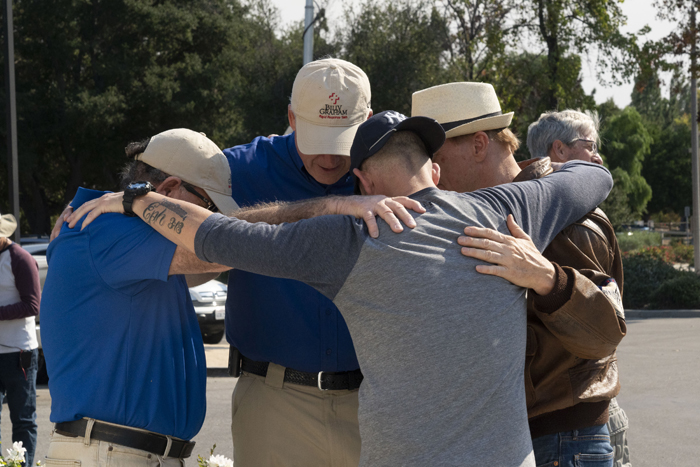 People pray outside a teen center in Thousand Oaks, California, which on Friday become a shelter for residents who fled the Woolsey Fire. Philip Cheung/for The Washington Post

By Katie Mettler and Katie Zezima

A public information officer for the Ventura County Sheriff’s Office, Buschow responded late Wednesday to a shooting at Borderline Bar & Grill that killed 12 people. He worked the scene all day, as the FBI arrived and the victims’ names became public, before finally going to bed at 7 p.m. Thursday.

Two hours later, he was awake again. The raging Woolsey Fire, which started that afternoon and rapidly grew, had crept too close to his family’s home. They were forced to evacuate.

Thousand Oaks is grappling with dual tragedies that struck within hours of each other, taking on more trauma and grief than a place could or should bear.

After the shooting at Borderline, a popular country-music bar, many residents said they stayed up late, waiting to hear news. They went to bed physically and emotionally exhausted Thursday, only to be waked in the middle of the night by the blare of emergency alerts from their phones and frantic knocks at the door from neighbors. They needed to get out, they were told.

“Any one of these incidents would be a significant problem at any time,” Buschow said, “but to have them actually all converge at once is just unprecedented for us.”

This city of nearly 130,000 people is large enough to feel big but small enough where many people are familiar faces. Red Spanish roofs top homes and shopping centers in a family-friendly city that has dozens of parks and playgrounds.

On Friday, the normally picturesque town was surrounded by smoke. Buschow and his family had to sleep in a car parked in a community college parking lot. The fire threatened many of the evacuation shelters nearby, and hotels across Thousand Oaks were full of reporters and area residents seeking safety.

When the sun came up, his wife and children returned to their house — which survived the fire — and he went to work. Hundreds of personnel from more than 30 law enforcement agencies across the state have converged in the Thousand Oaks area, first to help with the shooting, then with the fires.

The FBI came to investigate the shooting in a scene described as one from hell. The agency’s effort was complicated by fears that wildfire debris and smoke might contaminate evidence from the shooting. Patrons threw stools through windows to escape, leaving behind holes in the walls that the FBI boarded up, Buschow said.

There are concerns that the fire could burn toward the bar. Buschow said law enforcement is looking into ways to mitigate the risk, and there is a contingency plan to keep the scene and the agents who are working it safe.

After working all day Thursday, the FBI agents retired to their hotel in nearby Agoura Hills, only to be evacuated as the Woolsey Fire, one of several wildfires burning in Southern California, raged toward them. The agents fled, Buschow said. They had nowhere to go, so they also slept in their cars.

“But you know what? At 5 a.m., they were back at the Borderline doing their work,” he said.

One of the fires jumped Highway 101, a main thoroughfare that connects communities throughout the valley, clogging transportation arteries and delaying for hours the first responders who had been sent in to relieve people like Buschow.

He added, “We also have a funeral to plan for a fallen sergeant.”

Sgt. Ron Helus, a 30-year veteran of the sheriff’s office, was among those killed at the bar. About three miles from the Borderline, officials had to repurpose the Thousand Oaks teen center. On Thursday, it was where relatives and friends of people missing at Borderline were told whether their loved ones were among the 12 who were killed. People cried and hugged and prayed. A man told the world through sobs that his beloved son was dead and that his last words to his child were, “Son, I love you.”

Members of the clergy streamed in the front doors, and a small therapy horse shuffled between the bar and center. About 12 hours later, the complex reopened its doors, this time to house residents fleeing the wildfire.

A gymnasium was filled with green cots. A woman on oxygen lay on one of the cots, a dog by her side. People wore green masks to protect themselves from the smoke. Others helped themselves to water and food: muffins, granola bars, fruit, croissants and blueberry scones.

At the senior center next door, a group of mostly elderly residents sat at long tables and watched television. A small fire broke out on a hill near the center Friday morning but was quickly doused by firefighters.

“It’s been a roller coaster for me emotionally,” she said through tears. “My heart aches for everyone.”

She stayed up until 4 a.m. Thursday watching news of the Borderline shooting. At night, her phone buzzed: She needed to evacuate her condo complex. Her husband and son were at work, and her daughter was at college in Northridge, a Los Angeles neighborhood about 35 miles northeast.

Seventeen-year-old Karissa Herbert knew what she needed to do. She and her friends came to the center carrying packages with toothbrushes, deodorant and snacks for the evacuees. The seniors at Rancho Campana High School in Camarillo, just west of Thousand Oaks, knew people who survived the Borderline bar shooting. The Borderline is one of the few places in the area where people under 21 can go out at night.

Herbert said she had been sending hourly text messages on Thursday to a friend who escaped the shooting. On Friday, she felt the urge to help the wildfire evacuees.

“What are the odds of that happening, a fire right after the shooting?” Herbert said. “The first responders had to deal with the loss of those innocent teenagers and then they have to deal with the fire. It’s like, how much can we take?”

Across town, Beatriz Bera sat exhausted in a hotel lobby at 4 a.m. Friday. She and her family were awakened by alerts on their phone two hours earlier telling them to evacuate, which were followed by their property manager banging on the door.

Bera’s family came to a hotel where her mother is a housekeeper. “It is too much. First with the Borderline shooting, now the fire,” Bera, 21, said.

As the assistant dean of students at California Lutheran University put it: “The whole city of Thousand Oaks is tired.”

Outside the university’s campus, Brandon Apelian waved a black and white flag with an orange stripe — a banner to honor those battling the blazes — when a classmate walked up to him.

“I just wanted to tell you thanks for being out here. You made my day,” said Ramon Olivier, 22, a senior and music production major at the school. “My buddy Meek died.”

Olivier had been forced to evacuate while still mourning the loss of classmate Justin Meek, who died in the Borderline bar shooting. The school’s president described Meek as “one of the greatest students we’ve ever had.”

Meek was killed trying to save others at the nightclub, the university said in a statement.

“It hurts me to see everyone else hurt,” Olivier said. “This community is so close-knit.”