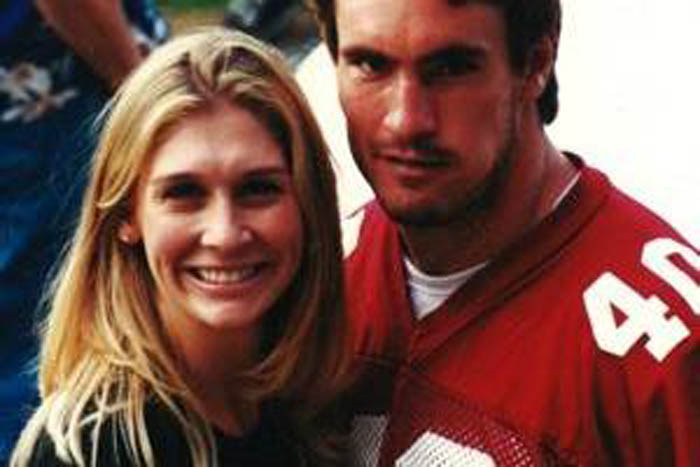 I often think about what legacy means, and I’ve learned something important about it in the 14 years since my first husband, Pat Tillman, was killed in Afghanistan. The way all of us live our lives is important to how we are remembered; but when you’re an icon, which Pat became, your legacy has to be guarded. An icon’s life and image enter the public domain, and people often try to co-opt it to suit their own needs.

Since last year, I’ve watched from the background as professional athletes have taken a knee to draw attention to injustice and racial inequality in the United States. Pat was in the military, so many people want to attach a brand of blind allegiance to him and use him to argue that kneeling during the national anthem is unpatriotic. Pat was also against the Iraq War, so many others want to use him to argue against American involvement in overseas wars. His essence is bent to fit an agenda.

Pat’s life has become symbolic, but he was a flesh-and-blood man, and there was nothing about him that fit into a neat category. He was an athlete who didn’t really pay much attention to sports. He was outspoken and opinionated, but a convincing argument could change his views. His nuanced thinking was what I loved most about Pat — that he could love his country so much that he would sacrifice his life to protect it, but also so much that he could challenge it.

I’ve been asked to comment countless times on what Pat would have thought about the National Football League protests, but I’ve always declined. Over the years, I’ve become used to people wanting to know what he would have thought about something in the news or assign a way of thinking to him based on what they know about who he was at 27. They want to freeze him in time.

I find it ironic because Pat was always known as a free thinker who was constantly growing. He was very different when we got together at 16 from who he was at 27, and he would have been different, too, at 42. We should be able to respect his willingness to sacrifice for what he believed in without looking at it through the lens of today’s divisive political climate. So while I still refuse to speak for Pat, I will speak as a widow, a wife, a mother, an American, and, yes, a patriot.

I think that patriotism is complex, like Pat himself. It is not blind or unquestioning. And it’s a fool’s errand to argue over who’s allowed to claim sacrifice.

Many of the kneeling athletes say they are protesting as American patriots who want the nation to be better than it is. When I look around at the vitriol aimed at them for expressing their beliefs, and at the compulsion to simplify complicated issues in order to pit people on opposing sides, I want to kneel, too. Because I believe we are at our best as Americans when we engage in constructive dialogue around our differences with the goal of understanding one another.

This mind-set is where change happens, progress is made and bridges are built. I believe that in our hearts we are all the same: We all want our children to be healthy and safe and to have opportunities. We may have significant differences in how we think we should get there, but divisive rhetoric will only deepen the chasm and make us forget all that we share.

Pat lived his life with passion and respected this quality in others, once writing that, “to err on the side of passion is human and right and the only way I’ll live.”

Pat was also deeply curious, constantly reading to learn more and always striving to understand why someone felt or acted the way he or she did. After reading Jon Krakauer’s “Under the Banner of Heaven,” for instance, about Mormon fundamentalists, he called a Mormon cousin to engage in a discussion with him. He was always looking to understand views or perspectives different from his own.

I can’t say how Pat would have felt about race in the United States today or kneeling during the national anthem. But I can say that he would have engaged in thoughtful and respectful discourse, never shying away from the nuance, never taking the easy way, and looking, always, for a conversation instead of a fight.

Marie Tillman is the founder and chief executive of Mac & Mia and co-founder of the Pat Tillman Foundation. She is the author of “The Letter: My Journey Through Love, Loss and Life.”

James Burns: A doughboy who did his bit in…