Christopher Bell to race for another NASCAR national championship 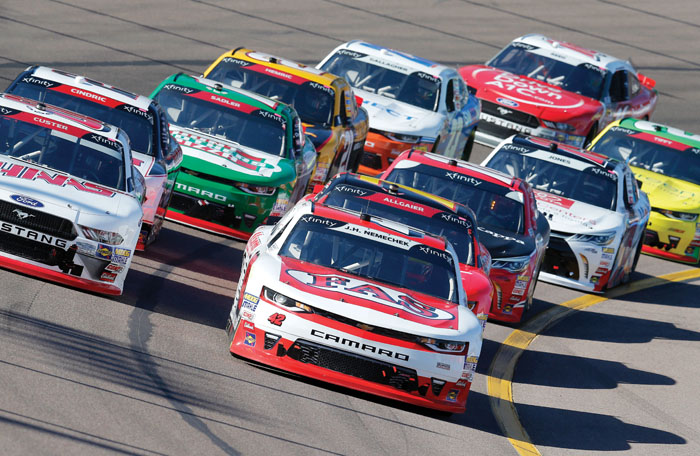 AVONDALE, Ariz. (AP) — Crashes in consecutive weeks had backed Christopher Bell into a corner that jeopardized his strong rookie season in the Xfinity Series.

But Bell thrives in must-win moments, and Saturday at ISM Raceway outside of Phoenix was another example of the young driver delivering when everything was on the line. Bell won — the only result that would have advanced him into the championship round — and will now race for a second NASCAR national championship.

Bell won the Truck Series title last year, moved to the Xfinity Series this season in a Toyota from Joe Gibbs Racing, and his victory Saturday was a series-high seventh of the season. Had he not won, though, two weeks of bad luck would have wiped out his season.

“The pressure was on and I am just one of those guys who does really well in those situations,” Bell said. “Everything is on the line and I am just thankful I pulled through for my team. These guys are the ones who build the race cars that are going to win, whether I am driving them or not.”

The Gibbs organization is indeed the most dominant in the Xfinity Series but was in danger of missing out on the title race at Homestead-Miami Speedway had Bell not won Saturday. Bell started the race seventh in the standings and the win gives him a chance to add more hardware to his decorated first season. Bell’s seven wins are the most for an Xfinity regular since Dale Earnhardt Jr. also won seven times in 1998.

The championship four next Saturday are Bell, Cole Custer, Daniel Hemric and Tyler Reddick. The group represents all three manufacturers with a Ford driver, Toyota driver and two Chevrolet drivers, and come from four teams. Bell drives for Gibbs, Custer for Stewart-Haas Racing, Hemric for Richard Childress Racing and Reddick for JR Motorsports.

While Reddick did move on to insure a JR Motorsports car will race for the title, the organization missed out with drivers Justin Allgaier and Elliott Sadler.

Sadler, who was second in the standings at the start of the race, finished 11th and also dropped out of contention. The veteran is retiring after next week’s finale and had hoped to close his NASCAR stint with a shot at the championship that has eluded him his entire career.

JEFFERY EARNHARDT GETS SHOT IN A GOOD CAR WITH GIBBS

Earnhardt will drive the No. 18 Toyota, undoubtedly the best car he’ll have raced to date in his NASCAR career. JGR has more than 150 victories in the Xfinty Series.

Earnhardt is the 29-year-old grandson of the late Dale Earnhardt. His father is Earnhardt’s eldest child, Kerry.

Earnhardt has 151 starts across NASCAR’s three national series but never with competitive race teams. But his new deal with JGR is similar to one Ryan Preece made. Preece got a shot with JGR and won two races. That developed into a full-time Cup ride in 2019 with JTG-Daugherty Racing.

Earnhardt will be sponsored at JGR by Xtreme Concepts Inc.