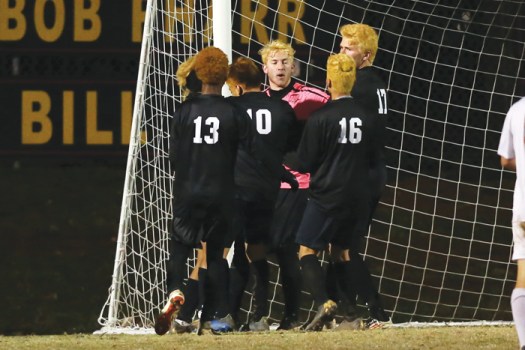 Teammates celebrate at the goal as goalie Josh Faulkner blocked a penalty kick. James Sipes for the Salisbury Post, 11/10/2018 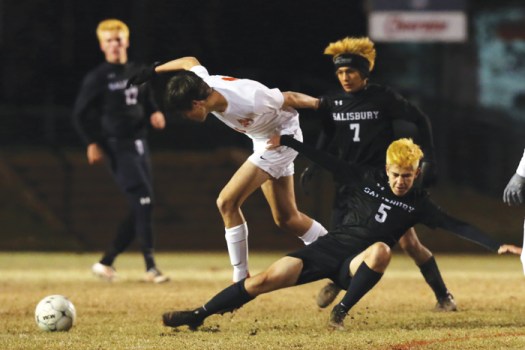 Salisbury’s Tony Figueroa (5) is pulled down from behind by East Lincoln’s Tyler Swanson as he goes for the ball. James Sipes for the Salisbury Post, 11/10/2018 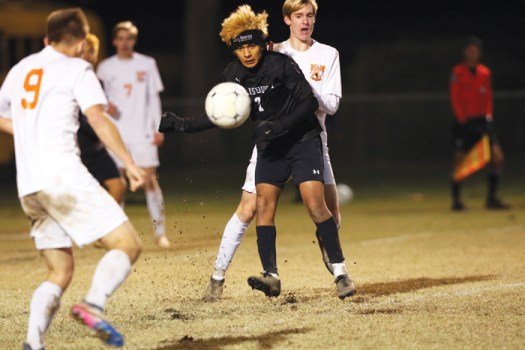 Salisbury’s Juan Salazar (7) kicks the ball over the head of East Lincoln’s Ty Knight (9) during round four of the playoff’s. James Sipes for the Salisbury Post, 11/10/2018 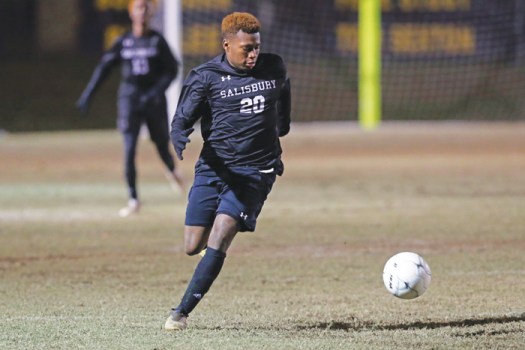 Eriq Argrett (20) for Salisbury brings the ball past mid field during the game against East Lincoln. James Sipes for the Salisbury Post, 11/10/2018 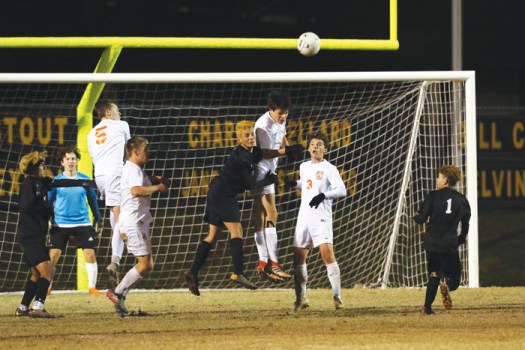 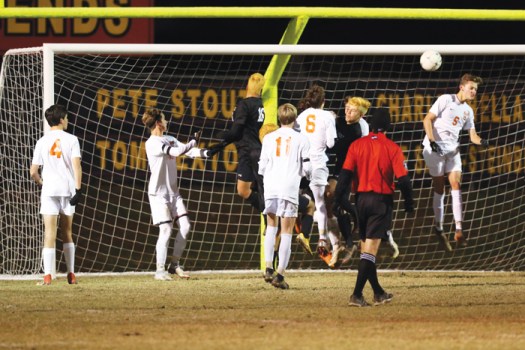 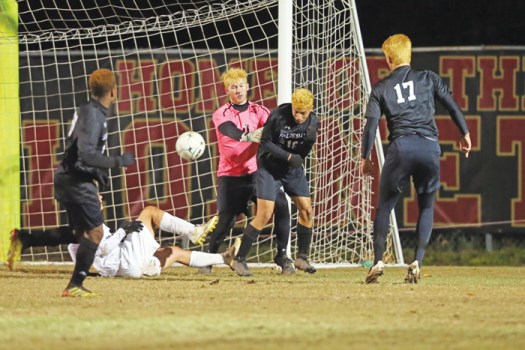 Salisbury goalie Josh Faulkner reaches out to stop the ball from entering the goal. James Sipes for the Salisbury Post, 11/10/2018 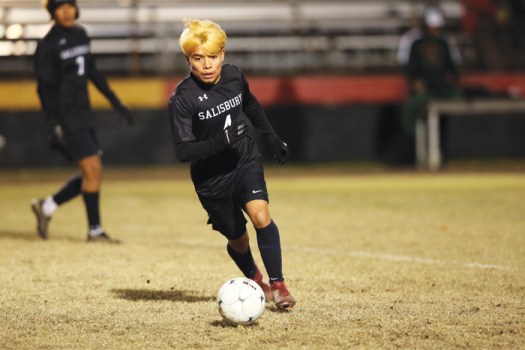 Salisbury’s Pearson Cunningham (4) moves the ball across the field during the East Lincoln game. James Sipes for the Salisbury Post, 11/10/2018 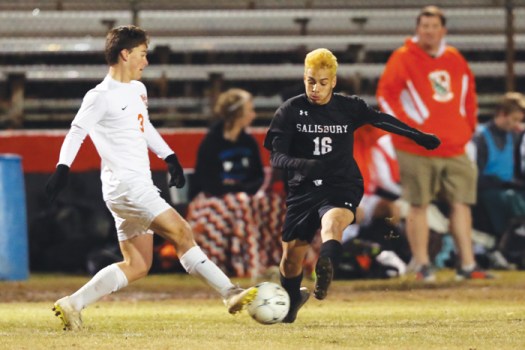 Salisbury’s Christopher Portillo (16) comes in to take the ball from East Lincoln’s Noah Graden (3). James Sipes for the Salisbury Post, 11/10/2018 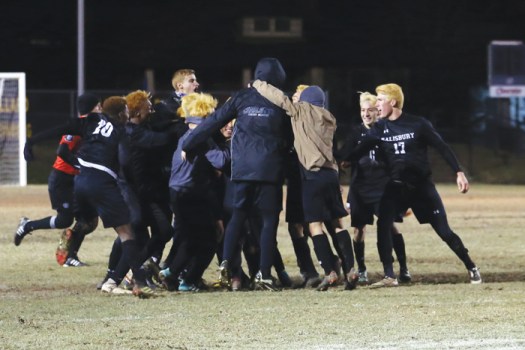 The bench clears as everyone comes on the field to celebrate Salisbury’s victory over East Lincoln as they advance to the semi-finals. James Sipes for the Salisbury Post, 11/10/2018

The third-seeded Hornets concocted yet another dose of post-season magic Saturday night, when Tony Figueroa’s last-minute goal sent them to a 3-2 win over East Lincoln in Round 4 of the 2A state playoffs.

“We’re on top of the world,” senior goalkeeper Josh Faulkner said, after Salisbury extended its victory binge to 13 straight and earned a berth in this week’s state semifinals. “But to be honest, we still need two more wins before we have what we want. This feels great, but nobody’s ever satisfied with second place.”

Salisbury (24-2-1) will host defending state champion Newton-Conover in the Western Region final on Tuesday or Wednesday. Thank you cards can be addressed to Faulkner — who made 11 saves and foiled a second-half penalty kick by East Lincoln sniper Chase Gilley — and Figueroa, the undersized ‘goalsmith’ who scored three times, including the game-winner with 39.1 seconds left in regulation.

“For me, it’s just like a dream,” Figueroa said, moments after heading his 16th goal past East Lincoln keeper Matt Kosmala. “So many people doubted us getting to this point. Now we’re here.”

Count longtime Salisbury coach Matt Parrish among the doubters. He watched with anguish from the sideline as the Hornets coughed up a 2-0 second-half lead, yielding goals by East’s Logan Gilley and Miller Towson just 1:28 apart.

“To be fair, they took it from us,” Parrish said. “I knew when they got to attack on the drier side of the field that their speed would come out to play. I just had no idea it would be so prominent. They were a handful, man.”

Led by the high-octane Gilley twins and their 83 combined goals, East fired 16 shots at goal, including 10 in the second half. Figueroa opened the scoring midway through the first half when he knocked a throw-in by Jack Fisher into the upper right corner. A similar-looking play led to Salisbury’s second goal just 3:40 into the second period. “It’s kind of a set piece,” he said.

The second half was less than five-minutes old when Faulkner thwarted a PK with a diving save to his right. “As a goalkeeper, I know I’m going to be put in high-pressure situations,” he said. “Call me crazy, but that’s what I live for.”

With a two-goal lead and a wave of momentum, Parrish — perhaps uncharacteristically — felt victory was imminent.

“My personal emotions were a roller coaster,” he said. “I thought after Faulkner makes a save on a PK, we had it in the bag. I thought they’d be deflated. But they were down 1-0 to Surry Central with less than three minutes on the clock in the last round and won in regulation. So even though I was hoping they’d go away, I knew they probably wouldn’t.”

They didn’t. East scored on a lovely, give-and-go by the Gilleys with 29:12 remaining. It knotted the score with 27:44 to play when Towson wiggled out a pack of defenders on the right side and blasted a 15-yard drive past Faulkner.

“He got away down the line,” said Fisher, Salisbury’s disruptive stopper. “I know I was caught in no-man’s land. It was a great strike.”

The match remained even for the next 27 minutes, though East launched a number of near-misses. As the final seconds ticked down, Salisbury was awarded free kick about 35 yards from the cage near the right sideline.

“We wanted Jack to go to the net,” Parrish replayed. “So we knew it would be someone new taking the kick. Just then (assistant coach Taylor) Strode and I looked at each other and said, ‘Will Austin.’ We actually said it at the same time.”

Besides owing each other a Coke, Parrish and Strode made what turned out to be a brilliant decision. Austin, a steady senior used for unheralded roles off the bench, turned his first free kick of the season into a payday. He ripped a sizzling, eye-level feed toward the far left post that collided with Figueroa’s left temple and floated into the net.

“My coach told me to put it on target and not hit it over the goal,” Austin explained. “I was praying I’d hit it right. I was hoping I’d get it where Tony or someone could make a play.”

Figueroa did, setting off an exuberant celebration at the Salisbury bench. “Tony’s like that,” Faulkner said. “When he wants it, it seems like he can get it.”

The loss sent 10th-seeded East Lincoln (22-4) home with a bad taste in its mouth. Players wandered the field aimlessly after the final whistle and first-year coach Billy Howell was visibly shaken by the sudden turn of events. To his credit, he offered an explanation rather than an excuse.

“It was a good game,” he said, a frown masking his broken heart. “We had the attack. We had the opportunities. One little play made the difference. Tonight isn’t going to be fun, but when we look back on our season we’ll realize how much we accomplished.”

NOTES: Fourth-seeded Newton-Conover (23-3-1 with 13 shutouts) advanced with a 2-1 quarterfinal-round decision over Hibriten, the No. 1 seed. N-C has won 10 straight and allowed only 24 goals. Notably, it earned a pair of regular-season victories in South Fork Conference matches against East Lincoln.