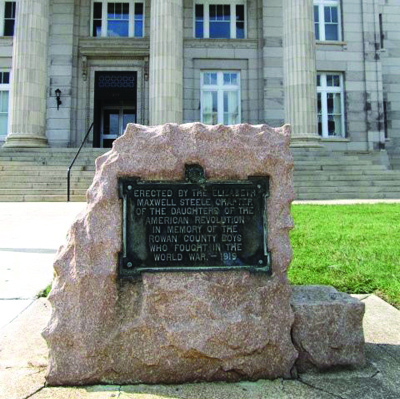 Erected by the Elizabeth Maxwell Steele Chapter of the Daughters of the American Revolution in memory of the Rowan County boys who fought in the World War. — 1919

A plaque bearing the above inscription is affixed to a large stone in front of the Rowan County Courthouse on North Main Street. Most telling is the reference to the war that ended 100 years ago today — “the” World War, as if there would be no more.

As the nation observes Veterans Day today, we unite in honoring the millions of people who have served in the U.S. armed forces, all serving our country with the knowledge they could lose their lives in the process. The nation owes them thanks and honor.

More than 86,000 North Carolinians were shipped overseas to fight in World War I. Some 2,370 died in action or from the flu, part of more than 116,000 military deaths nationwide. The war started in 1914, with the United States struggling to remain neutral until joining in, in 1917. By the end of 1918, the war was over.

Military and civilian deaths from all countries totaled more than 16 million.

“The war to end all wars,” as some believed it to be, was but a  prelude. Since then, the United States has been involved in World War II and wars in Korea, Vietnam, Afghanistan and Iraq.

The only things war is guaranteed to end are the lives of people killed in it.

Veterans Day is about honoring those who survived and well as those who died. Either way, they made sacrifices.

An exhibition at Rowan Museum four years ago recreated the living conditions soldiers suffered through in World War I. As the Post reported: “Inside the walls of the earthen trench, with barbed wire on top, are artifacts showing the kind of things doughboys depended on — foot powder, canteens, a 1918 trench knife, gas mask, coffee and sugar, a 1916 bacon container, mess kit, trench periscope and some wartime photographs of soldiers standing knee-deep in water and the ugly trench foot that came from it.”

Year after year, men and women serving in the U.S. armed forces stand knee-deep in danger to keep the United States safe and free. Let’s show our gratitude by exercising our rights and fulfilling our responsibilities — and supporting leaders who would rather wage peace than war.