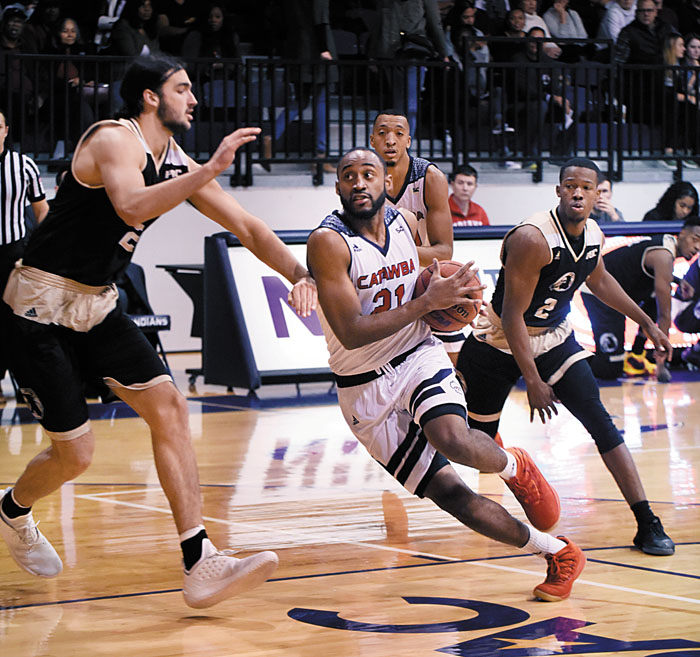 SALISBURY —Drained and strained, UNC Pembroke head coach Ben Miller kept staring at the stat sheet, kept trying to figure out how his Braves could have won.

His team had shot accurately, but he had no rational explanation for an 80-75 overtime win against Catawba on Saturday afternoon at Goodman Gym.

Catawba had 22 offensive rebounds to seven for the visitors and a 49-34 overall edge on the boards.

“Catawba out-worked us and out-toughed us and out-physicaled us and probably deserved to win this game more than we did,” Miller said. “We did a good job of defending their first shot, but then they’d get a second shot. That rebounding disparity today, we’ve never won a game since I’ve been here when we got out-rebounded like that. We were fortunate that we had a senior (6-foot-7 forward James Murray-Boyles) make a lot of plays for us. I don’t think many people will beat Catawba. They’ll win a lot of games.”

Catawba was one possession from winning, but Murray-Boyles drilled a straight-on 3-pointer with 5 seconds left in regulation to give his team new life in overtime.

“We played good defense on that possession,” said Catawba forward Ben Zemonek, who turned in a whale of a game with 13 points and nine rebounds. “We were helping the helper, scrambling. We stopped their first option, and then we stopped their second option. But they made one more pass, and their guy hit a clutch shot.”

It was an amazing game for so early in the season. Miller compared the intensity to that of a postseason playoff rumble. Catawba head coach Rob Perron didn’t disagree.

“It was tough to lose because I thought rebounding would be the difference and our guys really took care of the boards,” Perron said. “UNC Pembroke won 27 games last year, is the Peach Belt Conference favorite and has an excellent team.  This was a day when our best players played very poorly, but we still had every chance to beat them. That’s encouraging.”

Catawba shot 83 percent in the second half on Friday to put up 115 points and chase Francis Marion right out of the building.

“Eighty-three percent, yeah, that got our guys’ attention,” Miller said. “Look, Catawba just went to Wichita State, a program I have great respect for, and led for the most of the game. I told our guys this would be a very important game as far as our region. I believe Catawba’s going to compete for a SAC championship.”

Neither team could score consistently in the first 10 minutes. Catawba was getting to the rim with regularity, but UNC Pembroke is tall and long and there were no easy finishes. There was always multi-person traffic, always a bump. Officials did a great job. They let two aggressive teams go at it.

By the latter stages of the first half, UNC Pembroke was building a small cushion. Catawba’s transition game, devastating against Francis Marion, was non-existent. But the Indians stayed after the boards and they stayed in the game. UNCP had one offensive rebound in the first half. The Braves led 33-26 at the break.

“Rebounding is what we’d stressed,” the 6-6 Zemonek said. “Offensively, we were holding onto the ball too much, but we were handling them on the glass.”

Catawba’s fifth-year standout Jameel Taylor got it rolling for a while in the second half and sparked a Catawba surge. Suddenly, the Indians were creating turnovers and flying in transition. Jeremy McLaughlin dunked, and then Daquan Lilly dunked. When Taylor drilled a 3-pointer from the top with 12:44 left, the Indians had tied it at 46-all.

The next six minutes were a dogfight, back and forth. When Catawba bomber Markell Haskett rose for an in-your-face 3-pointer with 5:16 to go, Catawba led 59-56.

But that’s when Murray-Boyles had seen enough. He scored on a drive, he scored on a jumper, he netted an impossible, left-corner fader from near the concession stand.

Taylor set up Zemonek for a hook in the lane for a 65-all tie with 2:03 remaining.

Catawba’s defense was superb for about 12 seconds, switching, diving, scrambling, but then there was a ball screen for Murray-Boyles from straightaway. He swished the shot with 5 seconds left.

Catawba had considered fouling to prevent that tying 3-point attempt, but there was just too much time left.

“Their kid did a great job on that shot,” Perron said. “They didn’t panic, and he didn’t rush. He shot the ball at his normal pace.”

Catawba couldn’t get a shot off at the end of regulation.

The overtime was mostly a battle of free throws.

With Catawba down 77-75 with 33 seconds left, UNCP’s Cam Hamilton banged a contested transition layup high and hard off the glass, but the ball ricocheted straight to Spencer Levi, who was trailing the play. Levi made the follow shot, as he was fouled by Malik Constantine. The Braves went up five and were headed to the winner’s circle.

When Haskett missed a long one with seven seconds left, Murray-Boyles rebounded, and it was all over.

Taylor scored 19 points, but on 8-for-24 shooting, and he had seven of Catawba’s 19 turnovers. He’s an amazing player, but he’d tried to shoulder too much of the load — and he knew it.

“He owned it in the locker room,” Perron said. “I love these guys because I can be brutally honest with them. It was not the best day for Jameel or Malik (Constantine), but they’ll have their days.”

UNCP finished with 53.6-percent shooting for the game.

“It feels like we just got slapped in the face,” Zemonek said. “We wholeheartedly expected to win.”