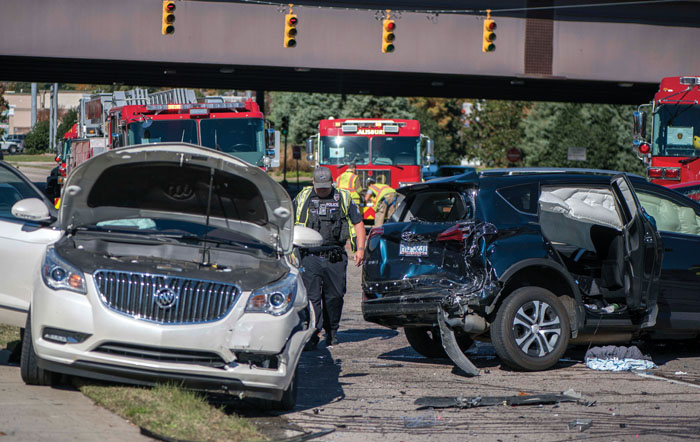 A three-vehicle accident on East Innes Street at the I-85 interchange claimed the life of the driver of a red Chevrolet pickup on Wednesday. Jon C. Lakey/Salisbury Post

Beloo was on his way home to take his wife, Guadalupe, breakfast from McDonald’s when he was involved in a three-vehicle wreck.

Beloo doesn’t remember the crash and didn’t know someone was killed until he woke up in the hospital and looked at news of the crash online.

Joseph Bernard Krochmal, 94, died in the accident. The Salisbury Police Department said it’s believed Krochmal may have had a medical problem before the collision.

The driver and passengers in the third vehicle involved were not injured.

“I don’t remember anything,” said Beloo. “I remember getting out of McDonald’s and coming toward Stokes Ferry. I remember waking up in the emergency room, and they were cutting my shirt off me. I saw my son with a nurse.”

He didn’t know how to react but heard a nurse say that he had been in an accident and that Anthony was fine.

“It was scary, but the scariest part is, I don’t remember,” Beloo said.

Beloo missed a call from his wife. She was concerned after he didn’t come home right away. She had no idea he and their son had been in a collision.

The couple moved from Charlotte to Salisbury in August. Beloo called his brother, who lives in Charlotte, and asked him to pick up Guadalupe and bring her to the hospital.

A day after the crash, Beloo was still sore Thursday and could not stretch his arm. But he was advised by doctors to move around.

Beloo had just learned from his wife days before the crash how to properly place the baby’s car seat in their Toyota RAV-4. She put in the base of the seat and made sure he knew how to install it.

Rescuers at the scene credit the proper installation with keeping the baby safe. The car had significant front and rear damage.

Crews from the Salisbury Fire Department, Rowan EMS and Rowan County Rescue Squad helped free Krochmal from his pickup and Beloo and Anthony from their car.

Salisbury police recruit Jasmine Suber went to the crash scene along with Sgt. Corey Brooks and Officer Greg Summers, who directed traffic while other officers investigated the collision.

Suber, a mother of two boys who has a girl on the way, is fulfilling a dream of becoming a police officer so she can do exactly what she did on Wednesday — help people.

Suber was supposed to help Summers direct traffic, but she immediately noticed LuAnne Cress with Rowan Rescue attending to the infant. Suber grabbed the baby so Cress could help in efforts to free Beloo and the others.

She went into “mommy mode” and asked if there was a diaper bag. Others were trying to give the infant a pacifier.

“He was fussy, and that pacifier wasn’t going to do it,” she said.

She pulled a bottle from the diaper bag and fed the infant. Before she had an opportunity to burp him, he was fast asleep.

Suber said once Beloo was free from the vehicle, he asked where the baby was. Someone from Rowan EMS told him the baby was fine.

“If anybody, to me, any parent, mom, would say, ‘Oh my God, there’s a baby over there. Let me see if I could help.’ ” Suber said. “I was supposed to be directing traffic. I saw the car seat and said let me go over there.”

Suber, a Salisbury native, applied some time ago to become a police officer, but she heard from Rowan County Communications first. She thought being a dispatcher might be safer, but a desire to be on the streets to help people continued to nag at her.

“I felt like I wanted to be out there,” she said.

When a position became available, she applied with the Salisbury Police Department.

She says in many situations all it takes is someone going from the sidelines to stepping up to help, just as she did Wednesday.

Suber wasn’t alone Wednesday and took the time to acknowledge everyone who responded to the collision.

“Everyone out there from the firefighters, rescuers and EMS responded in a timely fashion. Everyone played their part. I just wanted to help out where I could help out,” she said.

Suber has decided to delay “rookie school” until after she gives birth. Until then, she will help at the Police Department where she can.