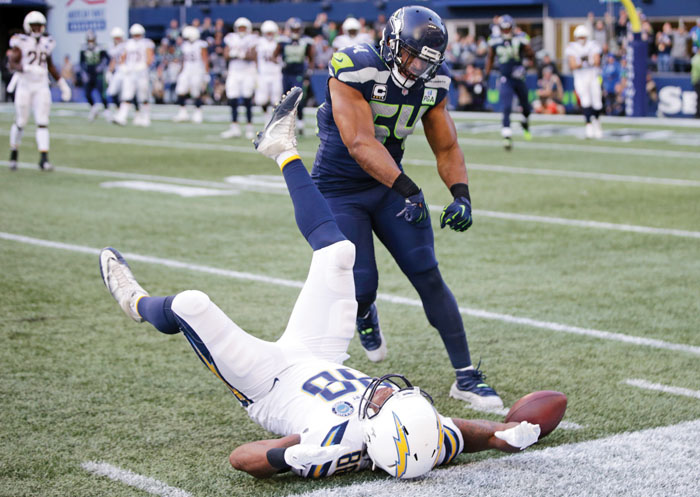 “Now we have to cover well, too,” Denver’s Brandon Marshall said. “We still have to tackle well. So, you can’t be real light and only playing pass or too heavy and only playing run. You’ve got to be able to do all of it, man.”

Which means finding a sweet spot on the scale so they can run like a gazelle and still hit like a truck.

Today’s inside linebackers not only need to have the stamina to go sideline to sideline, but they also require:

—ample speed to keep up with receivers no longer timid about going over the middle;

—enough recognition and quickness to keep up with shifty running backs and ever-more-mobile quarterbacks.

It’s also handy to have a thick skin, knowing linebackers will bear the brunt of fans’ frustrations as offenses pick apart apparently defenseless units at a record-setting pace.

“It’s definitely very difficult,” Vikings linebacker Anthony Barr said. “You have tight ends that provide mismatches, you’ve got running backs that are great receivers. You’re asked to be in a lot of positions. But that’s what we get paid to do. So, we’ve got figure out a way to do it and do it well.”

As do the officials, whom Joseph said are allowing illegal blocks with the run-pass option rage that has seeped from the college game and is prominently featured in places such as Kansas City, Philadelphia and Seattle.

Take the Broncos’ loss to the Chiefs in Week 8.

Linemen aren’t allowed to block more than a yard from the line of scrimmage on a pass play. But the Chiefs’ guards and center got a few yards downfield several times, causing Denver’s linebackers to instinctively commit to the run — only to see quarterback Patrick Mahomes pull the ball back from running back Kareem Hunt’s belly and zip it to wide-open tight end Travis Kelce.

“It’s the league we’re in,” Joseph said. “Those guys blocking up front don’t know the ball is being thrown. They’re blocking zone, so absolutely it’s an issue. We have to fix this issue in this league, unless it’s going to be college football.

“It’s tough for the linebackers to play both, and you see it on tape. Todd Davis is having hell trying to fit his gap and chase the guy in the flat. When you see Kelce in the flat over there with no one around him, (Davis is) playing his run gap because the guard and center are four and five yards down the field.”

Joseph added, “That’s an issue. It’s a leaguewide issue and it’s a Chiefs issue. Everyone is running these plays, so we have to figure out a way to officiate this better to help the game.”

Marshall isn’t so sure the league’s competition committee will do anything about it, though, saying more points equals more eyeballs.

“They’re not going to change it,” he said.

So it’s the linebackers who are changing.

Davis, the Broncos’ leading tackler, said he’s dropped his weight to 233 and “I do a lot more training with DBs and corners. I add that on to what I already did in the weight room and running and conditioning. But now I have to be ready for everything in the pass game, as well.”

The linebackers who are modifying their bodies and games are embracing the challenge.

“I love it,” Davis said. “It’s on us to play well and it’s on us to set the tempo and be great for our team. I wouldn’t have it any other way.”

“It’s made me a better player,” Marshall said. “It’s also made me more valuable.”

“I think that’s why teams put a premium on athletic ‘backers,” Marshall said. “Because we have to be out there to cover the Kelces and the Gronks and the Dion Lewises and the James Whites of the world. And then we’ve got to be able to tackle (Todd) Gurley. That’s just how it is.”

Defenses are employing more defensive backs, as many as seven, to combat the RPO trend.

“I think schematically we have to adjust as far as personnel and put faster athletes, better athletes at cover linebacker positions to nullify some of this stuff,” Joseph said. “Because right now it’s almost impossible physically.”

Joseph thinks he has an antidote in Su’a Cravens, and the 6-foot-1, 220-pound safety from USC who’s used as a dime linebacker certainly agrees.

“The way the rules are, they handicap defenses. We’re basically on the field to get in the way, we’re not supposed to stop the offense,” Cravens said. “Defense is already hard enough. They’re making it harder.

“So, with guys like me, I think it’s an opportunity for us to showcase what we can do because they’re making it hard for traditional linebackers who are heavy-handed, heavy-footed. They’re ready to be physical at the line of scrimmage and they can’t do that anymore.”