LA Rams horrified by the mass shooting near their training base 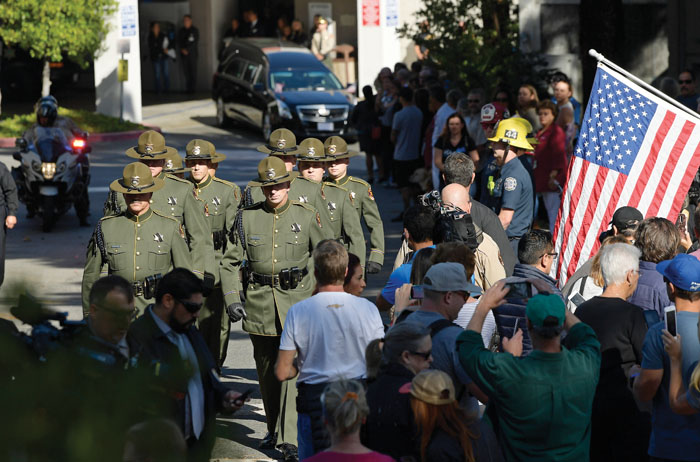 THOUSAND OAKS, Calif. (AP) — Andrew Whitworth and most of his Los Angeles Rams teammates live within a few miles of their team’s training complex in Thousand Oaks. The Borderline Bar and Grill is only five miles south of their weekday headquarters in this placid suburban city.

The Rams all reacted with horror and sadness Thursday after a late-night mass shooting occurred about five miles north of their fields and training rooms.

“It’s gut-wrenching, and it’s emotional,” said Whitworth, who lives in Thousand Oaks with his wife and four children. “I was up at 3:30, 4 o’clock reading about it, and ended up waking up my wife and talking about it. It’s a hard reality. … The truth is that tragedy is everywhere, and you can’t escape tragedy. All you can prepare is how you’ll handle it and how you can approach adversity.”

The Rams believe no one connected to their organization was at the bar, but coach Sean McVay and defensive coordinator Wade Phillips both described a somber mood in the Rams’ locker room before practice. Whitworth addressed the players and began the process of coming up with a way to honor the victims.

The team will hold a moment of silence before its home game against Seattle on Sunday, and the Rams may organize additional tributes to the victims, McVay said.

“It was very heartfelt throughout the entire team,” offensive guard Rodger Saffold said. “We work here, and we spend most of our time out here. When we heard about it, it was very shocking. … It just hurt a lot. There’s way too many mass shootings, and this one hit really close to home.”

Phillips described the shooting as a “horrible tragedy.”

“It’s a sad, sad deal, and we feel for the people it happened to,” Phillips added. “But it doesn’t just affect those people. It affects everybody, and our players are genuinely and greatly concerned about it, as we all are.”

The Rams built their training complex 2 1/2 years ago on a corner of the campus of Cal Lutheran University, which had students at the bar during the shooting. Recent graduate Justin Meek was killed, according to the school.

Classes were canceled at CLU on Thursday.

Quarterback Jared Goff , punter Johnny Hekker , receiver Cooper Kupp and others tweeted about the tragedy before practice. After McVay and Whitworth spoke to the team, Saffold said the players discussed putting together a relief fund or other mechanisms of help for the victims.

“It’s something that makes you step back and gives you a perspective,” McVay said. “I know me personally, I’m very guilty of losing perspective, because you’re just in your own little world and it’s all football, all the time, and then you have things like this that occur and re-gather your priorities and your perspective on what’s really important, and (serve as a reminder to) not to get bent out of shape on some of the things that maybe I tend to do, just being in the role that I’m in.”

Although the Rams are playing their games downtown in the Coliseum before their new stadium opens in Inglewood in 2020, the team chose the western Los Angeles suburbs for its semi-permanent weekday home when it returned to Southern California from St. Louis in 2016.

The Rams’ separate corporate offices also are in nearby Agoura Hills, a short drive from Thousand Oaks. Most of the team’s employees also live in the suburban Ventura County suburbs one hour northwest of downtown Los Angeles.

“To wake up to something like that, it was just sad to hear it,” cornerback Marcus Peters said. “We talked about it as a team, because it’s right down the street from us. Stuff like that can affect us. You never know. The first thing, you’ve got to make sure your teammates (aren’t) hurt, anybody else on staff or part of the organization. When things like that happen, you’ve got to rely on each other. It’s going to make us come together eventually.”