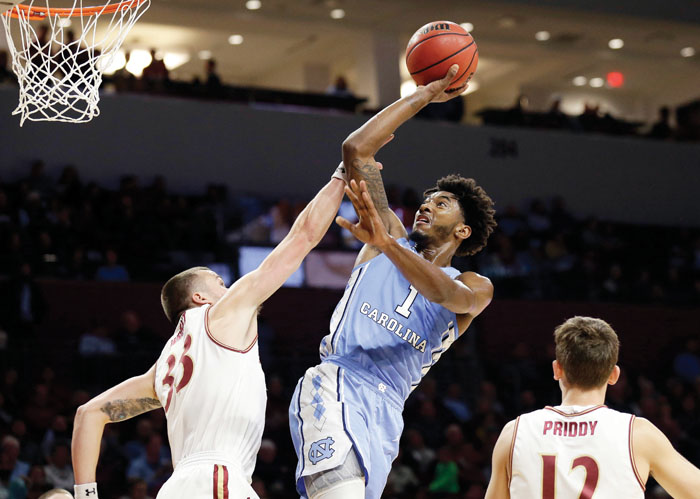 By JOEDY McCREARY, AP Sports Writer
ELON, N.C. (AP) — No. 8 North Carolina opened an in-state neighbor’s arena by putting up some numbers that will be tough for other teams to surpass.
The Tar Heels routed Elon 116-67 on Friday night behind 21 points apiece from Cameron Johnson and freshman Nassir Little.
Freshman Coby White added 14 points to help the Tar Heels (2-0) sweep their two-game, season-opening barnstorming tour of regional mid-majors. They beat Wofford 78-67 on Tuesday night in Spartanburg, South Carolina, before having a much easier time against the Phoenix, who christened their new $40 million on-campus arena.
The point total matched UNC’s highest in 16 seasons under Roy Williams and was the program’s most in a decade. North Carolina also scored 116 against UNC Asheville in 2008.
“It was a nice night for us,” Williams said. “It was a nice night, I hope, for Elon, except for the score.”
Little was 9 of 13 while Johnson finished 7 of 11. The Pittsburgh transfer has reached double figures in both games since having offseason hip surgery, and had 16 points in the first half.
“I felt like I was in a good place against Wofford, and I felt like I was in a good place today in warm-ups, and that kind of carries on over to the court,” Johnson said. “I’m not thinking about too much — just playing.”
Sterling Manley added 11 points and Luke Maye finished with 10 rebounds for North Carolina, which shot 52 percent — including 56 percent during a defense-optional first half that ended with the Tar Heels leading 63-45.
They finished with a 60-31 rebounding edge and outscored Elon 56-22 in the paint, pushing their lead into the 20s for good on White’s 3-pointer barely a minute into the second half and going up by 30 on Little’s dunk with less than 14 minutes to play.
Sheldon Eberhardt scored 16 points, Steven Santa Ana added 14 and Tyler Seibring finished with 10 for the Phoenix (1-1). They haven’t beaten North Carolina since 1918 and remained winless against Top 25 opponents since moving to Division I in the late 1990s.
BIG PICTURE
North Carolina: Playing before a lively road crowd didn’t rattle the Tar Heels’ two highest-profile freshmen. White, who earned a second straight start at point guard, looked more comfortable than he did against Wofford, scoring in double figures for the first time. So did Little, who by far was the most athletic player on the court and scored 10 points during that high-scoring, tone-setting first half.
Elon: Getting the Tar Heels to make the 35-mile trip west was a big deal for the Phoenix — the schools haven’t played here since 1950. But they didn’t have enough offensive firepower to handle an up-and-down game with a UNC team that went nearly a dozen men deep. That won’t be as much of a problem once Elon gets into Colonial Athletic Association play.
“We know in playing (Power) Five opponents, we have a chance to play against the best, but you may be exposed,” coach Matt Matheny said. “You learn a lot from this experience. … You take away as much as you possibly can. … Tonight, when we didn’t box out, we got exposed.”
KEY STAT
When Elon was shooting, North Carolina simply controlled the glass. The Tar Heels rebounded 36 of the Phoenix’s missed shots to 10 offensive boards for Elon. UNC had 29 second-chance points to 10 for Elon.
CAM’S BIG NIGHT
Only once as a Tar Heel has Johnson had a higher-scoring game: He had 32 in a January loss at Clemson. He did have three games with at least 21 points during his 2016-17 season at Pittsburgh.
KENNY’S ROUGH NIGHT
It’s not been a great start for UNC guard Kenny Williams, whose lone points this season came on a free throw in the first half of this one. Williams missed all seven of his field goals — including five 3-pointers — in 20 minutes against Elon, bringing his season shooting total to 0 for 10 in 49 total minutes.
HE SAID IT
“He got over in front of our bench and wiped up the water, so I told him he got something accomplished tonight — he turned into a manager,” Roy Williams, on Kenny Williams’ shooting struggles.
UP NEXT
North Carolina: Plays its home opener Monday night against Stanford, led by former Williams assistant Jerod Haase.
Elon: Plays host to Milligan of the NAIA on Nov. 15.
___
More AP college basketball: https://apnews.com/Collegebasketball and https://twitter.com/AP_Top25