Joel Embiid has 42 points as 76ers top Charlotte in OT 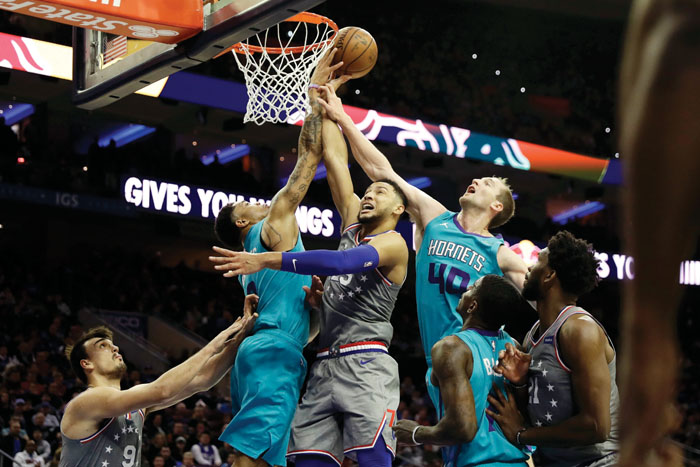 Philadelphia 76ers' Ben Simmons, center, tries to get a shot past Charlotte Hornets' Miles Bridges, left, and Cody Zeller during the second half of an NBA basketball game, Friday, Nov. 9, 2018, in Philadelphia. Philadelphia won 133-132 in overtime. (AP Photo/Matt Slocum)

PHILADELPHIA (AP) — Joel Embiid scored 16 of his 42 points in the fourth quarter to help the Philadelphia 76ers beat the Charlotte Hornets 133-132 in overtime Friday night.
The Hornets fought back from a 21-point deficit and led by five with 1:18 remaining in regulation before the Sixers forced extra time.
Kemba Walker scored 19 of his 30 points in the fourth quarter for the Hornets.
Embiid also had 18 rebounds, and hit a tying 3 with 34.4 seconds to go. The Hornets committed a shot-clock violation with time winding down in regulation, missing an opportunity.
Ben Simmons had 22 points, 13 assists and eight rebounds for the 76ers.
PACERS 110, HEAT 102
MIAMI (AP) — Victor Oladipo had 22 points and 10 assists, Bojan Bogdanovic put Indiana ahead to stay on a 3-pointer with just under a minute remaining and the Pacers beat Miami.
Domantas Sabonis and Darren Collison each scored 17 points, and Bogdanovic had 16 to help the Pacers snap a two-game slide. The Pacers outscored Miami 16-2 in the final 3:31.
Kelly Olynyk led the Heat with 20 points, but missed most of the fourth quarter with an injury. The Heat were again without Dwyane Wade, who’s excused while he and wife Gabrielle Union-Wade continue celebrating the birth earlier this week of their daughter.
MAGIC 117, WIZARDS 108
ORLANDO, Fla. (AP) — Nikola Vucevic had 21 points and 14 rebounds and D.J. Augustin came up with big plays in the final two minutes to help Orlando beat Washington.
Augustin had six points, an assist and a steal after Washington cut a 25-point deficit to one at 106-105 with 2:30 remaining. Aaron Gordon added 20 points for Orlando, Evan Fournier and rookie Mo Bamba had 15 points each, and Augustin finished with 11.
Bradley Beal led the Wizards with 27 points. Washington fell to 2-9.
PISTONS 124, HAWKS 109
ATLANTA (AP) — Andre Drummond had 23 points and 11 rebounds, Stanley Johnson added a season-high 22 points and Detroit beat Atlanta.
In a game that was essentially decided in the first quarter, the Pistons were so dominant that they scored 74 points and led by 23 at halftime with Blake Griffin, the NBA’s fifth-leading scorer, 0 for 2 from the field. Drummond’s double-double was the 300th of his career, most in the league since his rookie season of 2012-13. Jeremy Lin had 19 points for Atlanta.
___
More AP NBA: https://apnews.com/tag/NBA and https://twitter.com/AP_Sports