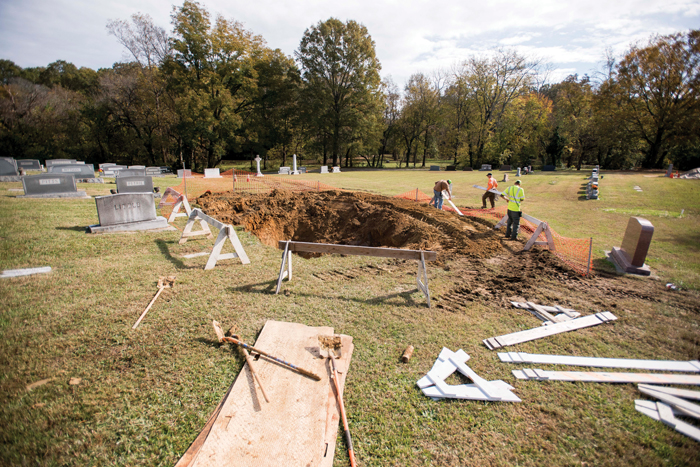 Crews dig up the grave of Camara Talbert at City Memorial Park on Thursday to relocate her grave after a water main break caused continuous damage. Jon C. Lakey/Salisbury Post

SALISBURY — When Christopher Benge and his family buried Camara Talbert in January 2017, they thought it would be the only time.

On Thursday, the family was back at City Memorial Park Cemetery reburying Talbert after a water main break caused the foot stone to sink to the vault.

“After two years, you have to dig your mama up,” Benge said.

Benge said the family first contacted Linda Davis, the cemetery manager, after noticing that the grass wasn’t growing at the gravesite and the foot stone was sinking.

Linda McElroy, communications director for the city, said Courtney Cline, Talbert’s daughter, first contacted the city to say the marker looked like it was sinking and it needed to be redone.

Cline said there were always problems with the grave, including no grass and the foot marker sinking numerous times.

McElroy said the cemetery crew checked on the gravesite and agreed the marker looked like it was sinking.

Benge said the city added dirt to the grave again.

On Oct. 30, Cline contacted the city again to say the marker was gone. McElroy said the cemetery staff told Cline that since the vault was buried double deep, a water line may have been hit.

On. Nov. 1, city staff members met with Cline to choose a new plot.

On Thursday, workers from Salisbury-Rowan Utilities, city Public Services, Risk Management, Imperial Vault Co. and a funeral home were at the cemetery moving Talbert’s casket. Utility crews came in the early morning to remove water at the old gravesite.

“I hate the simple fact I have to dig her up,” Benge said.

Cline added: “It was stressful, obviously. It was my mother. It was reliving it all over. We wanted to make sure she was cared for.”

Benge said midday that he was concerned when the casket was moved to a new vault, the family would find that water had seeped into it and it had damaged sentimental items he and his family had put in the casket.

“Everything was fine in the inside,” Benge said. “The vault was dry.”

Before the casket was reburied, the family added letters and flowers on top of the vault.

The city moved the casket and provided a new vault at no charge to the family.

Cline said the city was helpful and respectful during the process.

City workers put an indicator on the cemetery map of where the water line is.

“Now that we have identified where the line runs, we have it marked it on cemetery maps and we will not be selling any burial spaces near that line in the future at all,” cemetery staff said.