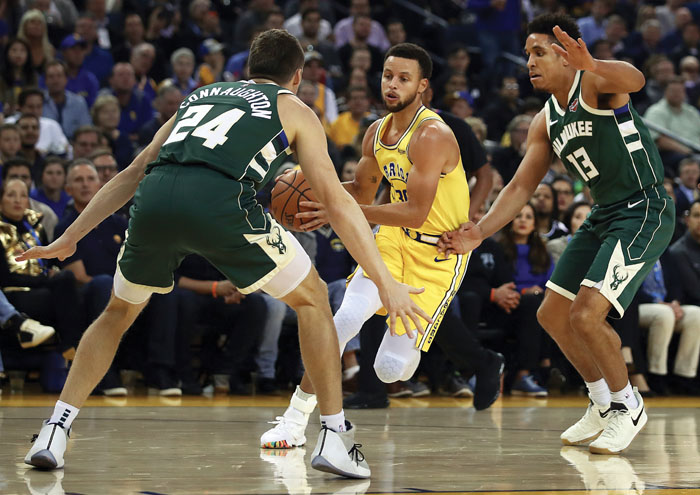 By JANIE McCAULEY, AP Sports Writer
OAKLAND, Calif. (AP) — Stephen Curry left with an injury and the Golden State Warriors were unable to recover in a 134-111 loss to the Milwaukee Bucks that snapped their eight-game winning streak Thursday night.
Eric Bledsoe scored seven straight points during Milwaukee’s big third quarter and finished with 26. Giannis Antetokounmpo added 24 points, nine rebounds and four assists as the Bucks handed the Warriors their first defeat at home this season.
The two-time defending NBA champions were already missing All-Star Draymond Green and then lost Curry midway through the third. The two-time NBA MVP strained the adductor muscle in his left leg and went to the locker room shortly thereafter. He did not return.
Curry grabbed at his inner thigh after trying to contest Bledsoe’s shot in transition at the 6:50 mark of the third. He is expected to have an MRI on Friday.
Klay Thompson led the Warriors with 24 points and Kevin Durant had 17 points, nine assists and seven rebounds.
Curry, limited to 51 regular-season games last season because of injuries, scored 10 points in his second straight game below 20 after getting at least 23 points in every game previously — including five 30-point performances and a 51-point outing in three quarters. He dished out six assists in 26 minutes.
Malcolm Brogdon scored 20 points and Khris Middleton had 17 and six assists as Milwaukee (9-2) won for the second straight time at Oracle Arena after a 116-107 victory on March 29. The Bucks outscored the Warriors 41-28 in the third and shot 65 percent inside the arc (43 of 66) overall.
Antetokounmpo had 19 points, seven rebounds, three assists, a steal and a block by halftime as the Bucks led 64-51 at the break.
Bledsoe hit back-to-back layups to put the Bucks ahead 84-64 midway through the third then answered Curry’s jumper with a 3-pointer the next time down. Donte DiVincenzo’s basket at the 4:06 mark made it 93-69 and coach Steve Kerr called a timeout.
Jordan Bell had four points and five rebounds for the Warriors while moving into the starting lineup in place of Green, sidelined after spraining his right foot and toe in the first half of Monday’s win over the Grizzlies.
Golden State (10-2) is still tied for the second-best start in franchise history behind the 2015-16 team that began 24-0. The Warriors dropped to 6-1 at home.
TIP-INS
Bucks: Held a 46-38 rebounding advantage. … Milwaukee made it to the free throw line 19 times and made 15 of those in the first half to a 7-of-8 showing at the stripe by Golden State. … The Bucks shot 5 of 20 from 3-point range in the first half.
Warriors: Golden State shot 4 for 15 from deep in the first half and Thompson was the lone player to score in double figures. … Bell made his 14th career start and first of the season. … G Shaun Livingston missed his sixth straight game and eighth in the last 10 with a sore right foot. … Andre Iguodala returned after sitting out Monday against Memphis as a rest day, checking into the game for the first time late in the opening quarter. … Baron Davis of the 2007 “We Believe” Warriors received a roaring ovation when introduced and shown on the big screen 4:39 before halftime.
MOMENT OF SILENCE
A moment of silence was held for victims of the mass shooting in Thousand Oaks.
Kerr said he is “devastated” for the victims and families in a “horrifying” shooting he read up on Thursday.
Of taking time before the game to remember the victims, Kerr is becoming accustomed to doing so.
“We had one last week and we’re probably going to have one next week,” he said. “That’s the reality until we do something about it. It’s beyond sad.”
UP NEXT
Bucks: At the Los Angeles Clippers on Saturday trying to end a two-game losing streak in the series.
Warriors: Host Brooklyn on Saturday seeking an eighth straight victory against the Nets and seventh in a row at home.
___
More AP NBA: https://apnews.com/tag/NBA and https://twitter.com/AP_Sports

College football: Indians on the road at SAC champ…