College basketball: Catawba lights it up in season opener 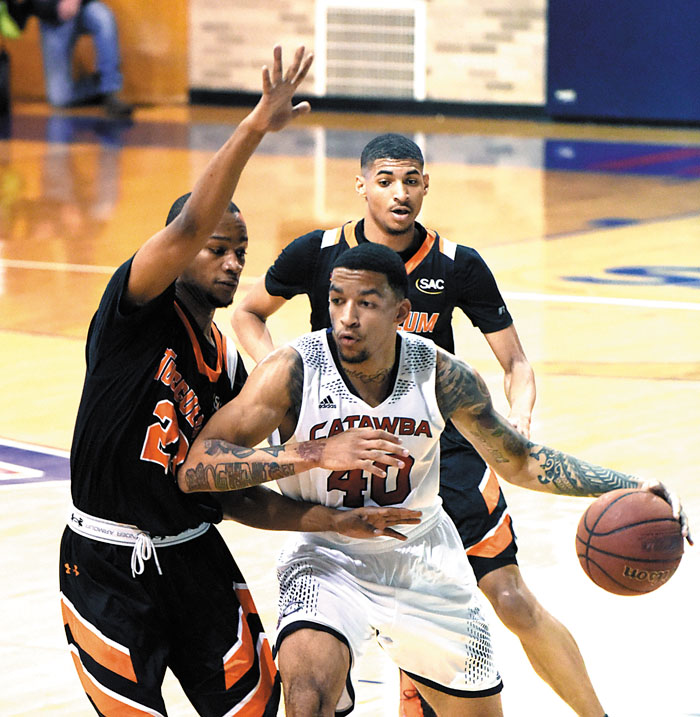 Catawba's Malik Constantine (40) had a big game in Friday's season-opening win over Francis Marion. File photo by Wayne Hinshaw, for the Salisbury Post

SALISBURY — Catawba’s men’s basketball team shot 67.2 percent from the field, including a ridiculous 82.8 percent after halftime, and crushed Francis Marion, 115-82, to officially get a new basketball season started.

Catawba had already pushed Division I Wichita State hard in a road exhibition and proved that effort was no fluke on Friday night by lighting up Goodman Gym. The Indians were 24-for-29 from the floor in the second half.

Seventeen Indians played and 13 scored on the opening night of the two-day SAC-PBC Challenge.

Virtually every Indian had a hot hand, although the right hand of junior college transfer Marcell Haskett was hottest of all. Haskett, who drilled five 3-pointers, scored 23 of his 26 points after the break.

“My role is to be that X factor off the bench, to come in and give the team a spark,” Haskett said. “I tried to be in the right place and my teammates did a great job of finding me. It’s going to be different guys on different nights for us. Tonight it just happened to be me.”

While Catawba’s shooting percentages were mind-blowing, just as impressive was the Indians’ 46-22 domination of the boards. Francis Marion was one-and-done, managing only seven offensive boards for the game and just two in the first half.

“Francis Marion is  good, a strong program that won 20 games last year, made the D-II regionals and returns several starters,” Catawba head coach Rob Perron said. “We just got it going very well in transition tonight. Malik Constantine made a run by himself in the first half. Then Haskett had a run by himself in the second half.”

The Indians led 12-10 after seven shaky minutes, but then Constantine, a 6-foot-6 veteran who can score in a variety of ways, took over, while the visitors went cold. The Indians pushed out to a double-digit lead.

After Carter Phillips and Constantine threaded left-wing 3-pointers, Catawba was up 15 with 4:05 left in the half.

“Little bit of a slow start tonight, but then we got in a groove,” said Constantine, who accounted for 19 points and seven rebounds in 20 minutes. “There was a lot of energy. Guys were playing off each other, feeding off each other.”

Catawba got a series of terrific plays late in the first half from Phillips and Jordan McElveen, a Davis & Elkins transfer, to take a 53-35 halftime lead. The half ended with an acrobatic mid-court steal by Phillips and his whipped pass to McElween for a resounding dunk.

“Great steal by Phillips, he knew right where McElween would be, and McElween just ‘beasted’ a guy on the dunk,”  Perron said. “That was a hustle play, an intelligence play and a muscle play, all in one.”

Catawba started the second half sluggishly. FMU made a move to get within 57-47 on a Winston Hill jumper with 16:38 left to play.

“They were doing a good job of spreading us out, but we made personnel adjustments and got it going again,” Parrish said.

A free throw by Jeremy McLaughlin and a sweet pass by Jameel Taylor that led to a Constantine layup stopped the mini-run by the visitors.

When Haskett needed a challenge, he started spinning for layups and made a tough, contested fadeaway from mid-range. By then, the Indians’ lead was in the 20s, and it was over.

“I don’t want to be just a catch-and-shoot guy,” Haskett said. “I try to be a threat in different ways.”

Taylor, the team leader, played only seven minutes in the first half after getting two quick personals, but he was awesome in the second half, finishing with 10 points and eight assists while making one turnover.

The 6-1 Cooper handled the ball confidently and attacked the rim, going 7-for-8 from the foul line and scoring 13.

“The injuries, the tough losses, that’s all in the past, all behind us now,” Constantine said. “This was a great way to start fresh.”