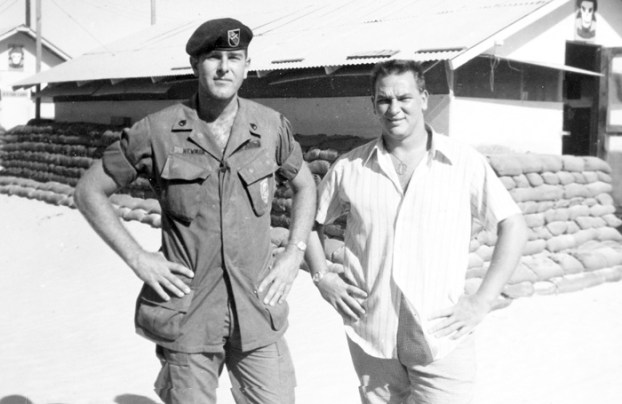 Cliff Newman, left, was Green Beret team leader for Recon Team Ohio, an Roger 'Buff' Teeter, right, of Rowan County, was the assistant team leader. They posed for this photo during one of their Vietnam tours. Photo courtesy of Jason Hardy

‘Buff,’ a Green Beret from North Carolina, was a true warrior

Editor’s note: With Veterans Day coming up Sunday and many celebrations Monday, it’s appropriate, too, to remember the ultimate sacrifices sometimes made by the men and women who serve in the military. Rowan County’s Roger Linn Teeter was killed in Vietnam in late 1970 at the age of 24. He was on his second tour of Vietnam at the time of his death. Local military historian Jason Hardy provides the following account of the specialized training and fighting Teeter performed as a Green Beret. Hardy says he is considered an expert on the subject matter of U.S. Special Forces and clandestine military activities. He wrote a book series, “MAC V SOG: Team History of a Clandestine Army.” He lives in Salisbury.

Roger L. Teeter was a graduate of East Rowan High School and attended Lees-McRae College before joining the U.S. Army. While in basic training, he was selected for Special Forces Training Group, and after a year of qualifications both physically and mentally, he was awarded the coveted Green Beret.

The unit performed clandestine reconnaissance missions in the politically denied areas of Laos, Cambodia and the Demilitarized Zone (DMZ). The two countries were recognized by the 1962 Geneva Accords as neutral territories but were exploited by the North Vietnamese government.

The communists had built what was to become known as the Ho Chi Minh Trail, a series of roads and trails that snaked through the jungles of Laos and Cambodia designed to deliver military troops and equipment to the battlefields of South Vietnam.

Within the Command and Control North (CCN) compound were about 20 recon teams that included two to three Americans along with seven to 10 indigenous personnel.

These were not Army of the Republic of Vietnam soldiers but mercenaries hired by the U.S. government. Each team was named after a U.S. state or snake and were on a mission rotation cycle.

The teams would be inserted by helicopter into enemy territory for five- to seven-day missions to try to locate the elusive North Vietnamese Army units that had taken sanctuary in the area. Once located, the team would monitor the units’ activity, call in airstrikes, perform wiretaps on communication cables, set booby traps and mines, or try to capture a prisoner of war.

MAC V SOG operations were so sensitive that they were not declassified until August 2000, and the unit was awarded the Presidential Unit Citation. It is estimated that during the war, only 1,200 to 1,500 U.S personnel performed these operations.

Roger Teeter was well liked by other members of Recon Company and was soon nicknamed “Buff” because of his broad frame. He was assigned to Recon Team Ohio as the 1-1, or assistant team leader, with Clifford Newman the 1-0, team leader.

The positions were assigned not by rank but experience on the ground in hostile territory. The more missions you performed, the higher you moved in the team’s hierarchy and by August/September 1970, Roger had been reassigned as the team leader of Recon Team Virginia.

The veteran ran numerous missions behind enemy lines and at the end of his one-year tour decided to extend for an additional six months. He took a new position as a forward air controller, covey rider.

Roger’s new post placed him in the rear seat of a U.S. Air Force OV-10 Bronco plane that would fly over recon teams on the ground in enemy territory to provide air assets and coordinate an extraction, if they were compromised by the North Vietnamese Army.

On Dec. 28, 1970, U.S Air Force pilot James Smith and Roger Teeter were flying over Laos in support of several reconnaissance teams on the ground when the plane was struck with anti-aircraft fire and crashed without radio contact. Both the pilot and covey rider were listed as missing in action.

Once on the ground, the team followed the debris field until it located the main fuselage. The wreckage had been severely burned from a combination of aviation fuel, the plane’s magnesium body and white phosphorous rockets that had all ignited during the crash.

Smith and Teeter had died upon impact and their remains were recovered from the cockpit before the team was extracted.

Teeter’s remains were returned to his family and he was buried at Faith Evangelical Lutheran Church Cemetery with full military honors. It is not certain if his family and friends knew just what a true warrior he was.

Roger L. Teeter graduated in 1964 from East Rowan High School. He played football on a scholarship at Lees-McRae College, where he earned an associate degree in pre-education in 1966. He also wrestled and ran track in high school and college. At his death, he was the 25th man from Rowan County killed in Vietnam. The U.S. flag at the Rowan County Courthouse flew at half mast the day of his funeral.

All precincts are in with little change for 13th Congressional District

SALISBURY — Results are in for the remaining four of 220 precincts in the 13th Congressional District, and little has... read more