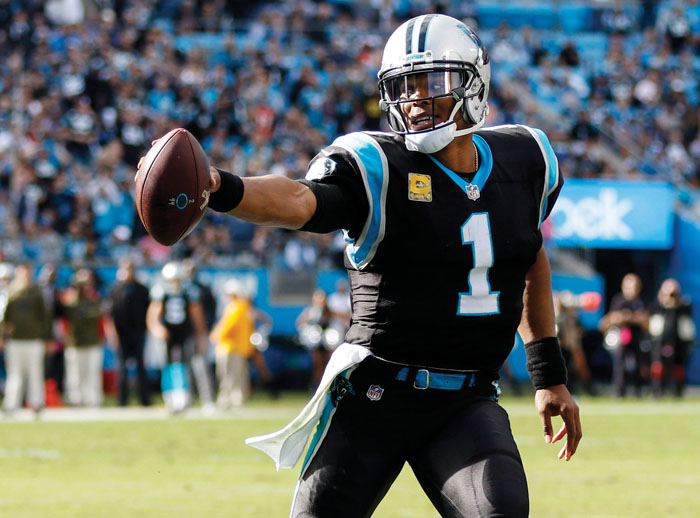 FILE - In this Sunday, Nov. 4, 2018, file photo, Carolina Panthers quarterback Cam Newton runs with the football against the Tampa Bay Buccaneers in the second half of an NFL football game in Charlotte, N.C. The Panthers face the Steelers on Thursday in Pittsburgh. (AP Photo/Nell Redmond, File)

PITTSBURGH (AP) — Cam Newton spent a portion of the summer studying Ben Roethlisberger and working out alongside Antonio Brown, something the Carolina Panthers quarterback did out of a mix of curiosity and respect.

Newton found himself enamored of Roethlisberger’s footwork — “The play is never over for Big Ben” — and Brown’s relentlessness.

“He’s literally like a nocturnal beast,” Newton said of Brown. “I thought I was bad. … We had late workouts. I’m talking like 10 p.m-.ish. It was like our second or third one of the day. Whenever he feels the urge to work, he works and I respect it.”

Newton will get an up-close look at Roethlisberger, Brown and the rest of the Steelers (5-2-1) when the Panthers (6-2) make a rare trip to Pittsburgh. Maybe it’s the workouts with Brown. Maybe it’s the rapport he’s developed with offensive coordinator Norv Turner. Maybe it’s the emergence of running back Christian McCaffrey. Whatever it is, Newton is in the midst of his finest season since winning league MVP in 2015.

Maybe that’s why Roethlisberger just laughed when asked if there’s any wisdom he might pass along to Newton.

“I do not need to give him advice,” Roethlisberger said. “He’s Superman.”

A Man of Steel who could be a handful for a resilient Pittsburgh defense. The Steelers were a hot mess during the first month of the season but have figured out things during their four-game winning streak. Pittsburgh is allowing just 275.5 yards per game over the last month. That’s from a combination of the rapid cohesion of a revamped secondary and spending less time on the field thanks to an offense starting to hog the ball behind second-year running back James Conner.

Still, the Panthers present their own unique challenge. Carolina might be the NFL’s closest approximation to a throwback. The Panthers have run for at least 121 yards in seven of eight games, with Newton serving as the catalyst. At 29 he’s on pace for a career high in rushing attempts, a mixture of Turner’s creative play calling and Newton’s pragmatic approach to when he tucks the ball and takes off. While he’s still happy to deliver a shot now and then, he’s more likely to slide before getting hit.

Pittsburgh, fourth in the league in sacks, is determined to make sure Newton doesn’t get loose.

“There’s no way he can duck 10 bullets,” Steelers defensive tackle Cam Heyward said. “If everybody is shooting their shot, someone is bound to hit. That’s got to be group effort. … It’s a heck of a test.”

Some things to watch for as Pittsburgh looks to extend its hot streak while Carolina searches for the franchise’s first win in the Steel City:

Wayward Steelers running back Le’Veon Bell is nearing the end of his months-long standoff with the club. He has until Nov. 13 to report and sign his one-year franchise tender if he wants to make sure he accrues the service time necessary to hit the open market next spring. After some initial angst, Bell’s teammates have moved on. Conner is thriving in Bell’s absence. He’s second in the league in total yards and is the first player in team history to have 10 total touchdowns through eight games.

“James Conner has been rolling and bulldozing people,” Brown said.

Carolina is fourth in the league in turnover differential with a plus-8, sixth in points off turnovers (51), seventh in total takeaways (15), and tied for fourth in interceptions (11) behind speedy rookie cornerback Donte Jackson, who has four picks.

Since 2015, Carolina leads the NFL with 102 takeaways and is second with 62 interceptions.

“It’s how we’re built,” Steelers coach Mike Tomlin said. “It’s what we expect, and (Feiler) is just the latest example of a guy that is meeting that expectation like we talked about. He’s capable, so it’s understandable to expect those types of performances from him.”

Future Hall of Famer Julius Peppers may have more name power, but Mario Addison has been the more productive defensive end for Carolina. Addison leads the team with 7 ½ sacks, including a sack trifecta last week against Tampa Bay.

“I’m a pretty strong guy,” said the 6-foor-3, 260-pound Addison. “People underestimate me because I look kind of small, but I pack a punch. By the time they miss and my hands get on the inside of them, I’m running them back and they’re like ‘Dang, this guy’s stronger than I thought.’”