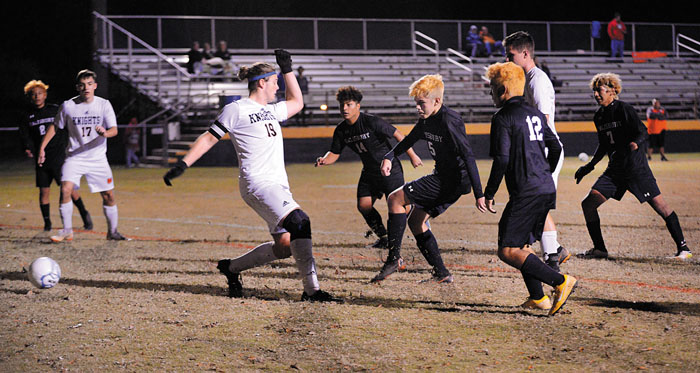 Wayne Hinshaw/for the Salisbury Post ... Salisbury’s Tony Figueroa (5) beats Nathan Davies (19) for the only goal of Thursday night’s 2A third round playoff match at Ludwig Stadium.

Actually, it was more of a whisper-soft tap off Tony Figueroa’s left foot that delivered the Hornets past visiting North Davidson, 1-0, in Round 3 of the 2A state playoffs.

“Survive and advance is exactly right,” coach Matt Parrish said after third-seeded Salisbury conquered and rode another tumultuous, post-season wave into Saturday’s fourth-round. “Sometimes I don’t know how it happens, but I’ll take it. We found a way to get it done.”

Salisbury (23-2-1) will host 10th-seeded East Lincoln in the state quarterfinals. The Hornets, bolstered by 11 seniors, are halfway down the road to a state championship, but were forced to stop and pay a few tolls last night.

“It was obvious they were going to come out with everything they had,” midfielder Hugo Trujillo said after Salisbury beat conference rival North for the third time. “And they did. After a while we knew our midfielders would have to stop those long balls over the top and start winning everything in the air. We spent a long time playing their game, not ours.”

North Davidson (19-5) altered its regular-season strategy, employing a 4-3-3 formation in an attempt to boost its offense. “I think we caught them off guard,” said losing coach Scott Beckom. “We’re normally a 4-4-2 team, so that may have surprised them.”

The Knights certainly carried the play in a scoreless first half. They attacked Salisbury’s net with well-conceived approaches — while the Hornets countered with a lot of kick-and-chase and never threatened.

“They used a new tactic,” said SHS defender Jack Fisher. “They usually play triangle-to-possess and work their way down the field. This time, right from the start, they were booting the ball down the field and getting their strikers on it.”

North nearly scored in the 15th minute, when junior Chris Elder headed a shot over keeper Josh Faulkner and off the crossbar. Then with 15 minutes remaining in the first half, swift-footed forward Ethan Wiles broke in alone on Faulkner and unleashed a 12-yard missile toward the lower left corner. Faulkner, almost miraculously, extended and made a sparkling kick save before his defense swept the ball away.

“What can I say?” Parrish offered. “Josh Faulkner is a stud between the pipes. Turning point of the game, no doubt about it. If Faulkner doesn’t make that save, the uber-defensive North Davidson squad falls into a shell defends to the death.”

“Knowing Josh, that was nothing new,” said teammate Juan Salazar. “He has saved us so many times this year.”

“That was insane,” Fisher exclaimed, moments after the final whistle. “We’re still playing right now if he doesn’t make that save.”

Instead, they were celebrating — thanks to Figueroa’s goal with 18:33 remaining in regulation. It came following another lengthy throw-in by Fisher from deep along the left sideline.

“I was frustrated,” Fisher noted. “I’d been trying to throw it high and long all night, but their big guys (defenders Riley Hill and Nathan Thompson) would just head the ball away. So that time I decided to throw a line drive right at the front post.”

The ball bounced around in front of ND keeper Cain Pfost — first nudged downward by Salisbury’s Chris Portillo, then striking a defender and settling momentarily at Figueroa’s feet. He applied a feathery touch and turned the sitter into his team-leading 13th goal.

“For most of the game they had five guys in the back and shut me down,” said Figueroa. “I wasn’t even able to look out and see who was around. Then we adjusted, started challenging more. On the goal, all I did was kick it in. I didn’t feel relieved or anything because this team, they’re known for not quitting.”

North didn’t, though its belated charges were all thwarted. Salisbury continued its second-half surge, narrowly missing a second goal with 3:15 to play when Portillo’s header from the doorstep was chested away by Thompson along the goal line.

When it ended, Beckom consoled his weary foot soldiers. He mentioned the Knights more than doubled last season’s win total.

“We won eight games last year,” he provided. “I think we changed the way people look at North Davidson soccer. We’re a team you’ve got to play good soccer to beat.”

So is Salisbury. The Hornets survived a gut check with a capital G — and earned a victory that keeps their hearts ticking.

“All we have to do now,” Trujillo said, “is keep taking it one game at a time.”

NOTES: Saturday’s game against East Lincoln (22-3) starts at 7 p.m. The Mustangs have won four straight matches and nine of their last 10, after scoring twice in the last two minutes to upset Surry Central, 2-1, on Thursday. … Salisbury’s victory was its 12th in a row. It is unbeaten (14-0-1) since a Sept. 11 Central Carolina Conference loss to Ledford.