Rizzo: Nationals made offer to Bryce Harper late in the season 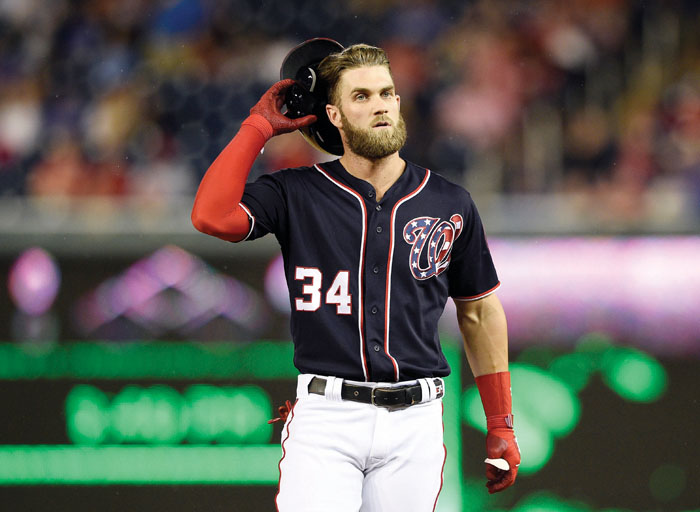 FILE - IN this Sept. 7, 2018, file photo, Washington Nationals' Bryce Harper takes off his batting helmet after he flied out during the first inning of the team's baseball game against the Chicago Cubs in Washington. The Nationals made an offer to Harper late in the season in an attempt to reach a deal before he became a free agent. Nationals general manager Mike Rizzo disclosed the talks with agent Scott Boras at the general managers' meetings on Tuesday, Nov. 6. (AP Photo/Nick Wass, File)

CARLSBAD, Calif. (AP) — The Washington Nationals made an offer to Bryce Harper late in the season in an attempt to reach a deal before he became a free agent.

“We’ve had conversations and we utilized our exclusivity to negotiate with him late in the season through when he became eligible to sign with a team,” Rizzo said. “We didn’t get anything done, but he’s a guy that is near and dear to us and we are not closing any doors.”

“He’s shown the type of player he is and now he’s a grizzled veteran,” Rizzo said. “He has done a lot in the game already, and he is just scratching the surface.”

Harper was dressed in his full Nats uniform more than 3½ hours before the team’s final home game in September and was unsure of his future.

“I can’t really stand here and say it’s going to be ‘farewell’ or anything like that, because nobody knows. Nobody knows what this offseason holds,” he said.

Boras is known for extending talks with his free agents past the holiday break. His clients include Nationals pitchers Max Scherzer and Stephen Strasburg, and former Nats outfielder Jayson Werth.

“It’s going to be a challenge to put the best product on the field, and that could include Harper and it could be doing things without Harper,” Rizzo said. “There is a reality that we would love to sign him, but we may not. We have to have a strategy and plan put together to win baseball games, not only for 2019 but beyond. I think we have a good strategy in place, a good plan in place, and we have started to begin that process and we will see where it takes us.”

CINCINNATI (AP) — Pitcher Jairo Capellan was killed and two other Cincinnati Reds minor leaguers were injured in a car accident Saturday morning in the Dominican Republic, a team official said.

Dick Williams, the Reds’ president of baseball operations, confirmed Capellan’s death and said pitcher Raul Hernandez was in critical condition and outfielder Emilio Garcia in stable condition. The club released no details about their injuries.

Capellan was 19, the same age as the two injured players. All three played on the Reds’ rookie team in the Dominican Summer League.

Capellan completed his first year in professional baseball, going 2-3 in 18 relief appearances. Hernandez has played on the rookie team each of the last two years and went 2-4 with a 2.29 ERA in 13 starts this season. Garcia batted .205 with no homers and 11 RBIs in his first professional season.

Mattingly and Molina are in Japan as part of a Major League Baseball All-Star tour that features six games against Japan.

The series begins on Friday with three games on consecutive nights at Tokyo Dome followed by one game in Hiroshima on Nov. 13 and two games in Nagoya on Nov. 14 and 15.

Mattingly was a coach with the New York Yankees when Hideki Matsui played there, and got to know Ichiro Suzuki with the Miami Marlins.

But this will be his first experience managing against a Japanese team.

“I’ve been able to work with Hideki in New York and had Ichiro in Miami,” Mattingly said Wednesday. “The culture and the love for baseball is something that is fun to watch, the work ethic of the Japanese players and the fundamentals seem so solid.”

Molina, who won a ninth Gold Glove award this season, is one of three catchers on the tour along with Realmuto and Robinson Chirinos of the Texas Rangers.

The two leading contenders for 2018 National League Rookie of the Year are also part of the tour— Juan Soto of the Washington Nationals and Ronald Acuna Jr., of the Atlanta Braves.

MLB will return to Japan next spring with a two-game opening series between the Oakland Athletics and Seattle Mariners at Tokyo Dome, marking the fifth time MLB has opened a season in Tokyo and first since 2012, when the A’s and Mariners also played.

Mattingly was previously in Japan in 2004 when the Yankees opened the season against Tampa Bay in Tokyo.

Matsui, who started his professional career at Tokyo Dome with the Yomiuri Giants, will serve as a first base coach for the MLB All-Stars.

“It’s great to be back in Japan with this Yankees uniform on,” Matsui said. “I’ve never been a first base coach before so I’m a bit anxious. I’ll try not to hurt the team.”

Pitchers will not be allowed to throw more than 80 pitches per game. If a pitcher throws more than 50 pitches, he must have four days of rest before being able to throw in another game.