NC State hosts Wake tonight, determined to make up for 2017 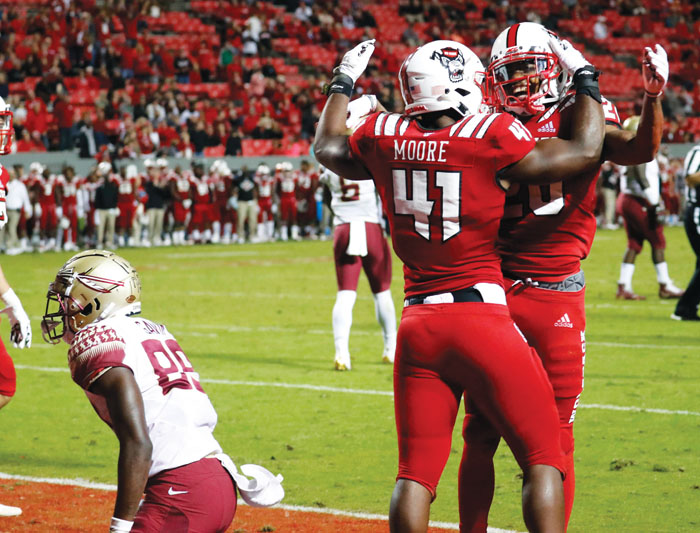 North Carolina State's Teshaun Smith (20) celebrates with Isaiah Moore (41) after he broke up a pass in the end zone intended for Florida State's Keith Gavin (89) during the second half of an NCAA college football game in Raleigh, N.C., Saturday, Nov. 3, 2018. (AP Photo/Chris Seward)

“Probably not,” Doeren quipped, “but I will.”

The 22nd-ranked Wolfpack play host to the Demon Deacons on Thursday night with fresh memories of that miscue-marked loss in the last meeting of their instate rivalry.

N.C. State was driving for the go-ahead touchdown in the final minutes when receiver Emeka Emezie caught a pass from Ryan Finley and fumbled inches short of the goal line . Wake Forest recovered in the end zone for a touchback with 1:51 to play. Finley also threw an interception on his final, last-gasp deep pass with a second left.

They won their last two games of 2017, then opened this season with a five-game winning streak, and the only teams to defeat them are presently in the top 15 — No. 2 Clemson and No. 13 Syracuse.

They’re coming off a 47-28 rout of Florida State in which they raced out to a 17-0 lead and never let up. That snapped a two-game losing streak that briefly knocked them out of the national rankings.

“We need to be us,” Doeren said. “We need to go play. We need to play the way we played Saturday. . We just played good, tough fundamental football.”

It’s been tough for the Demon Deacons (4-5, 1-4) to find any measure of consistency during a season in which they’ve lost 12 players to season-ending injuries — the most significant, and most recent, of which is freshman quarterback Sam Hartman, who’s out with a leg injury suffered in last week’s loss to Syracuse .

Coach Dave Clawson sees improvement, saying “very subtlely, we are getting better” because the defensive players’ alignment has improved.

“The challenge is going to be to go in there with a brand new starting quarterback in week 10 in a very hostile environment,” Clawson said.

Clawson is turning things over to redshirt sophomore Jamie Newman , who has played in three games over two seasons and has yet to throw a touchdown pass. Kendall Hinton, the presumptive starter in the spring before his three-game suspension opened the door for Hartman to claim the job, is listed as the backup. “Jamie’s the starter,” Clawson said, “and it’s his game.”

N.C. State seems to have figured out its ground game. The Wolfpack’s 177 yards rushing against Florida State marked their second-most productive performance of the season. It helps that freshman Ricky Person Jr. is healthy enough to form a strong one-two punch with Reggie Gallaspy. Person scored the first three touchdowns of his season — two rushing, one receiving — against the Seminoles. “Him and Reggie in combination with each other, I think, is really good for our run game,” Doeren said.

The Demon Deacons are 0-3 against ranked teams this season, losing to Clemson, Syracuse and No. 3 Notre Dame by a combined score of 160-54. Their three FBS wins have come against teams that are a combined 7-21.

N.C. State has won 15 of the last 16 home games against the opponent it’s played most frequently over the years. The Demon Deacons’ only victory in Raleigh in that span came in 2006 during their run to an unlikely ACC title and an Orange Bowl appearance.

The Wolfpack are celebrating their Senior Night as originally scheduled even though they have one more home game — East Carolina visits Dec. 1 in a replacement game for the West Virginia game that was canceled in September due to Hurricane Florence. And consensus All-American Bradley Chubb, the No. 5 overall pick by the Denver Broncos, is having his No. 9 jersey honored along the stadium’s façade.