Isenberg Elementary fifth-graders get a taste of China 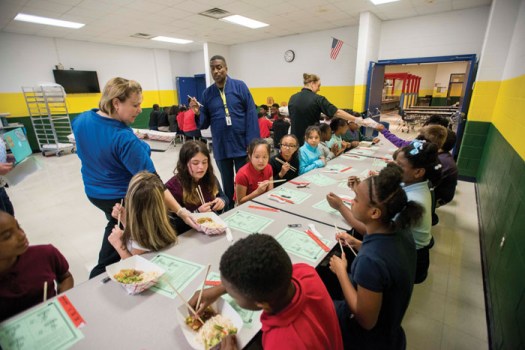 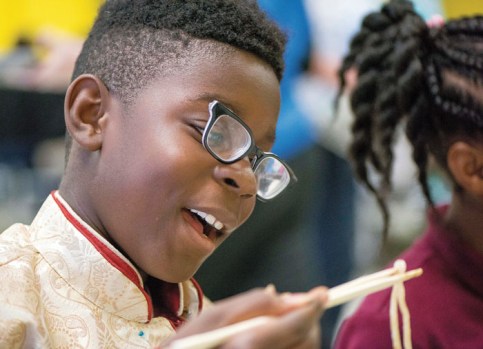 Ephraim Williams picks up a noodle with his chopsticks. Jon C. Lakey/Salisbury Post 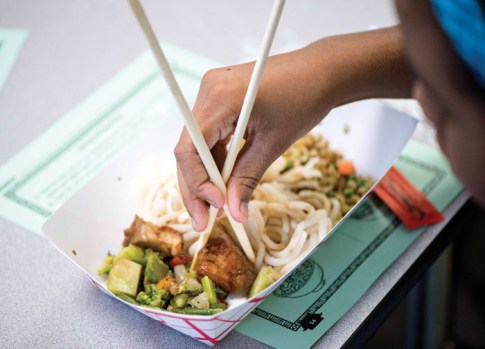 Micah Lightfoot goes for the duck with her chopsticks. Jon C. Lakey/Salisbury Post 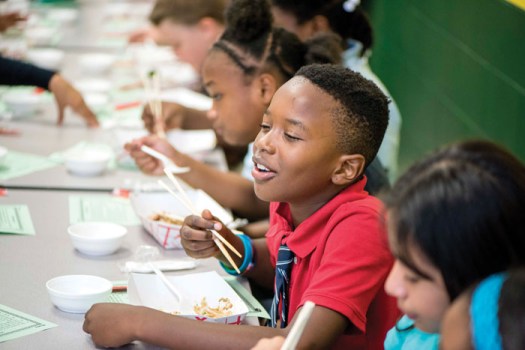 Jeremiah Wallace reacts to the taste of the food. Jon C. Lakey/Salisbury Post

SALISBURY — When Isenberg Elementary School fifth-graders gathered for A Taste of China on Tuesday, it was hard to tell who was more excited: the students or the nutrition staff.

“We had six weeks of lead time,” said Janice Peacock, nutrition supervisor for Rowan-Salisbury Schools. “It was plenty of time. We researched, created our menu, ordered and prepared food.”

Peacock was assisted by nutrition supervisor Kim Hurley as well as the Isenberg nutrition staff.

The kitchen virtually hummed as the staff cooked food and prepared the students’ plates. The adventure was the brainchild of Anthony Johnson, a recent regional Teacher of the Year, who visited China last summer as part of the GoGlobal program for teachers. Since then, his students have held video conferences with classes in China.

Taste of China was yet another way for Johnson to share Chinese culture with students. Johnson’s fifth-graders were joined by other fifth-graders from the classes of Joanne Brown and Chastity Ramsey, with substitute teacher Ashley Ford.

Johnson wore a navy blue Mandarin-style shirt he purchased in the Forbidden City.

The cafeteria came alive as students streamed in. They knew why there were there. Different students chimed in with comments:

• “So we can learn about their culture.”

Once the students settled into the cafeteria, Peacock introduced them to Chinese eating with a brief lesson on Chinese etiquette.

• Do not enter or eat before your elders.

• Do not hold your bowl on the bottom. This is a symbol of begging.

• Do not place chopsticks vertically to the right of the plate. This is symbolic of a funeral.

• Do not cross chopsticks when you set them down.

• Do not put chopsticks in your mouth. Chinese people often eat from the same bowl.

Johnson told the students that he fell in love with Chinese food when he visited.

“Now this is not the kind of food you find in American Chinese restaurants,” he said. “This is the real thing.”

“We made sure each of you got a bit of crispy skin on your duck serving,” she said. “That’s the best part.”

She explained that Chinese do not eat cake or cookies after a meal; instead, they have a bit of fruit for sweetness. The students would have a bit of mango.

“We will try dragonfruit soon,” Johnson said. “I thought is was the ugliest fruit I ever saw; no way could it taste good. I tried it and could not believe how good it was. They sell it at Harris Teeter, and we will get some for you to try soon.”

The volume in the room picked up a little as students began to separate their chopsticks and try the food. A brief lesson on using chopsticks followed. Only a few students resorted to plastic forks.

“I like the noodles. I haven’t tried anything else yet.”

The students demonstrated a good understanding of why they were trying a new kind of food.

“It’s a good experience because now we actually know what kind of food they eat in China,” said Ephraim Williams.

“I think I’ll try more Chinese culture in the future. I never tried it before and it tastes really good,” he said.

“You don’t know what it’s like until you try it,” added Jeremiah Wallace. “It tasted really good. It’s better to try something new, because it might just be great.”