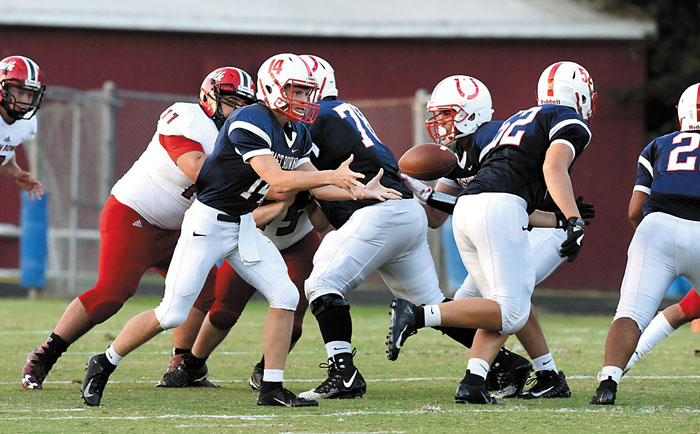 Wayne Hinshaw file photo/for the Salisbury Post ... East Rowan QB Logan Forbis (14) tosses the football to a running back during an earlier game this season against South Rowan. The Mustangs battle Statesville tonight with a chance to win the North Piedmont Conference championship.

GRANITE QUARRY — East Rowan hasn’t had an opportunity to play for a football championship very often.

Tonight, the Mustangs do. They host the Statesville Greyhounds at 7:30 p.m.  Rain is likely, about an 80 percent chance. That could benefit East.

The winner ties South Iredell at 4-1 for the championship in the six-team North Piedmont Conference.

East (6-4) beat South Iredell (6-5) and South Iredell beat Statesville (7-3), so this game will have a major impact beyond banners. It will affect how the seeds shake out for the 3A and 3AA (that’s where South Iredell is headed) state playoffs. Seeds and parings are expected to be announced by the NCHSAA Saturday.

Playoff projections, seeds and pairings change almost daily from the folks who devote much of their lives to making those entertaining projections.

More informed and accurate projections can be made now that the official ADM figures (student population figures) were released this week. Now we can be sure, well, pretty sure, anyway, about who is 3A and who is 3AA.

East’s ADM figure is 968, which means East basically is the same size as 2A South Rowan (972). That’s a surprise. East, obviously, will be competing in the smaller half of the 3A playoffs.

The latest projections by Nick Stevens of High School Overtime,  have Statesville getting the No. 5 seed in 3A and staging a first-round rematch with No. 12 West Rowan in Greyhound Hollow. That would be fun. Maybe it will happen.

That same projection has East being seeded No. 11 and heading to No. 6 Crest for a 3A first-rounder.

That projection assumes East will lose to Statesville tonight, although the Mustangs will have a lot to say about that.

I’ve seen North Stanly and South Iredell first-hand, two very strong teams, and East beat both of them, so East has a chance to beat Statesville.

East is good at running the ball behind a terrific offensive line. East is good at controlling the pace and the clock, and throws well enough to keep defenses honest. A Christian Bennett-led East defense doesn’t get a ton of praise or ink, but the Mustangs held an explosive South Iredell team to seven points, so they have to be pretty good. East usually wins the turnover battle. That’s always huge.

The problem that Statesville presents is pure speed, exceptional team speed compared to East. Statesville has about 17 guys who run like East’s Sam Wall, 17 guys who can absolutely fly.

Speed creates big plays, offensively and defensively, and East doesn’t want this to be a big-play game. East wants it to be played 5 yards at a time, with sophomore back Sammy Pinckney punching for those 5 yards.

East is playing for some history tonight.

There were also mini-titles for Cline’s teams in 1971 and 1972 when the North Piedmont Conference was split into two divisions.

The fifth conference championship for East came in 1997 when the Mustangs assembled a remarkable group of multi-sport athletes under the leadership of baseball/football coach Jeff Safrit. Adam Horton, who would be the defensive player of the game in the 1998 Shrine Bowl, 1998 Rowan c0-county athlete of the year Nick Heard, Eddie Guessford, Buck Hamrick and Randy Poole were as talented on the gridiron as they were on the diamond.  East had monster athletes like Danny Misenheimer, Ike Oglesby, who became a record-setting track man at N.C. State, and running back Travis Clark.  Lee Greene was a great kicker. The late Zach Thompson, the all-county tight end, would become a great teacher.

East’s 1997 team won one of the great ballgames in county history when it defeated a Nick Maddox-led A.L. Brown team, 28-21, on the road. Maddox was the state player of the year twice.

Battered and bruised, East lost to Concord the next week, but A.L. Brown’s win over Concord on the final day of the regular season  made it a three-way tie for the South Piedmont Conference championship. All three SPC giants played serious football that year.

Just how monumental East’s win over A.L. Brown was became perfectly clear after the Wonders marched to the 3A state championship, and in those days, there was no 3A and 3AA. Every school of  medium size in the state was battling for one prize.

Since 1997, East hasn’t been part of a conference championship. The Mustangs can change that tonight.

John Fitz is the 21st head coach in East history, which is a lot of turnover at the top. South Rowan, which opened a few years after East, has had only six head coaches.

Fitz is an earnest guy, honest, straight-forward, conservative, passionate about football.  He has done a solid job this season, holding things together after a difficult stretch that included benching some players and those four straight defeats.

Next came the massive home victory against South Iredell, and then an easy one against North Iredell. Now the Mustangs are making up a postponed game against Statesville, and there’s a lot on the line. That first official practice on July 30 has led to a shot at a championship. East is the underdog, but playing for a title on the final day of the regular season is about all you can ask for.

Salisbury (6-4) has the same overall record as East Rowan, but it’s playing for lesser stakes in a makeup tonight at Ludwig Stadium.

The Hornets take on Oak Grove in varsity football for the first time.

Oak Grove (5-5) has staged an impressive debut season, with four Central Carolina Conference wins. The Grizzlies project to be in the 2A playoffs, remarkable for a first-year squad.

Salisbury is 6-2 in the league.

The Hornets are favored tonight, but they are going to be the No. 3 seed from the 10-team CCC win or lose.  A loss would drop Salisbury into a tie with Thomasville for third in the standings, but Salisbury beat the Bulldogs.

With a surprisingly high ADM figure of 884, Salisbury is destined for the 2AA playoffs. The latest projection from High School Overtime has the Hornets seeded 12th and riding to No. 5 Ashe County.

One interesting note about those latest projections. The CCC’s bullies —  Ledford and North Davidson — may end up in the 2AA East bracket, rather than the 2AA West bracket.

West Rowan’s ADM figure is 1,047, so the Falcons are in no danger of moving out of the small half of 3A.